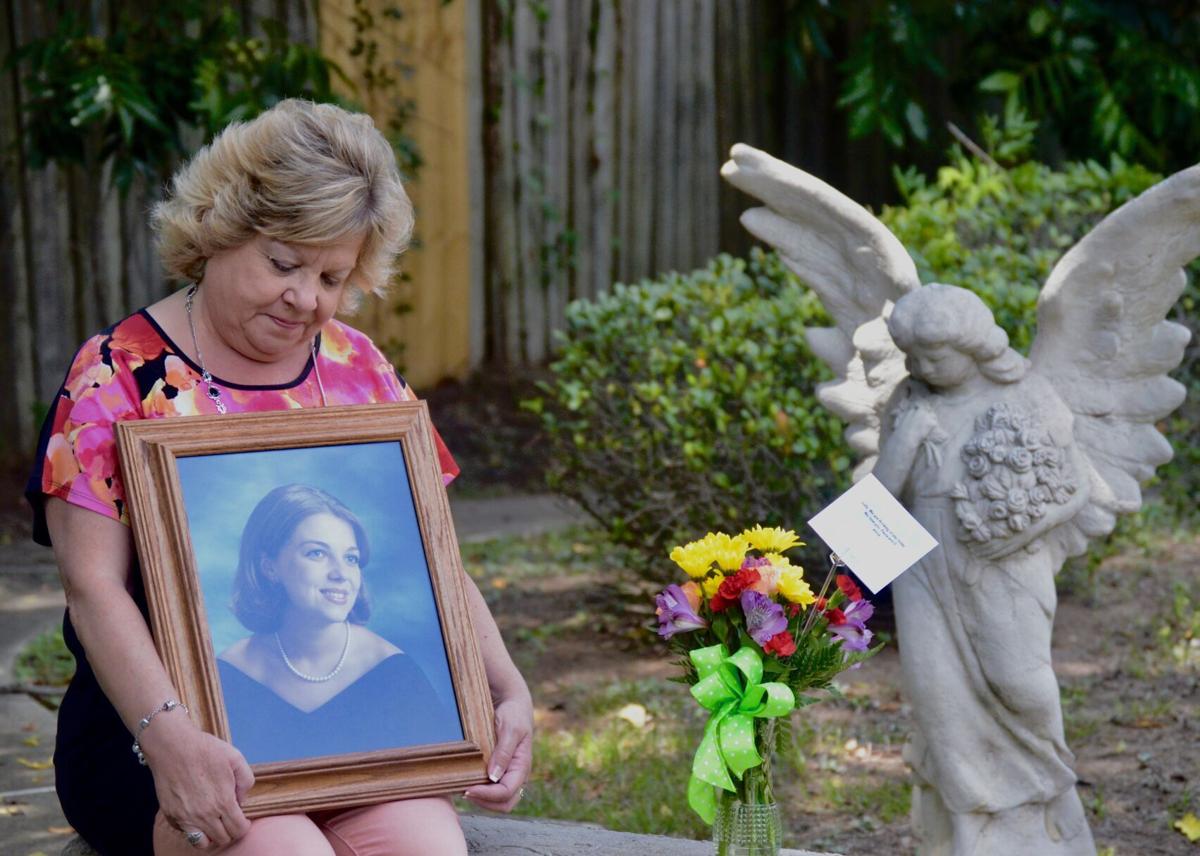 Judy Carpenter holds Jessica's senior pictured in a memorial garden built behind Judy's place of work. The photo was taken the summer before Jessica would have started her senior year at Aiken High School in 2000. The photo remains framed and displayed at Judy's home in Aiken. 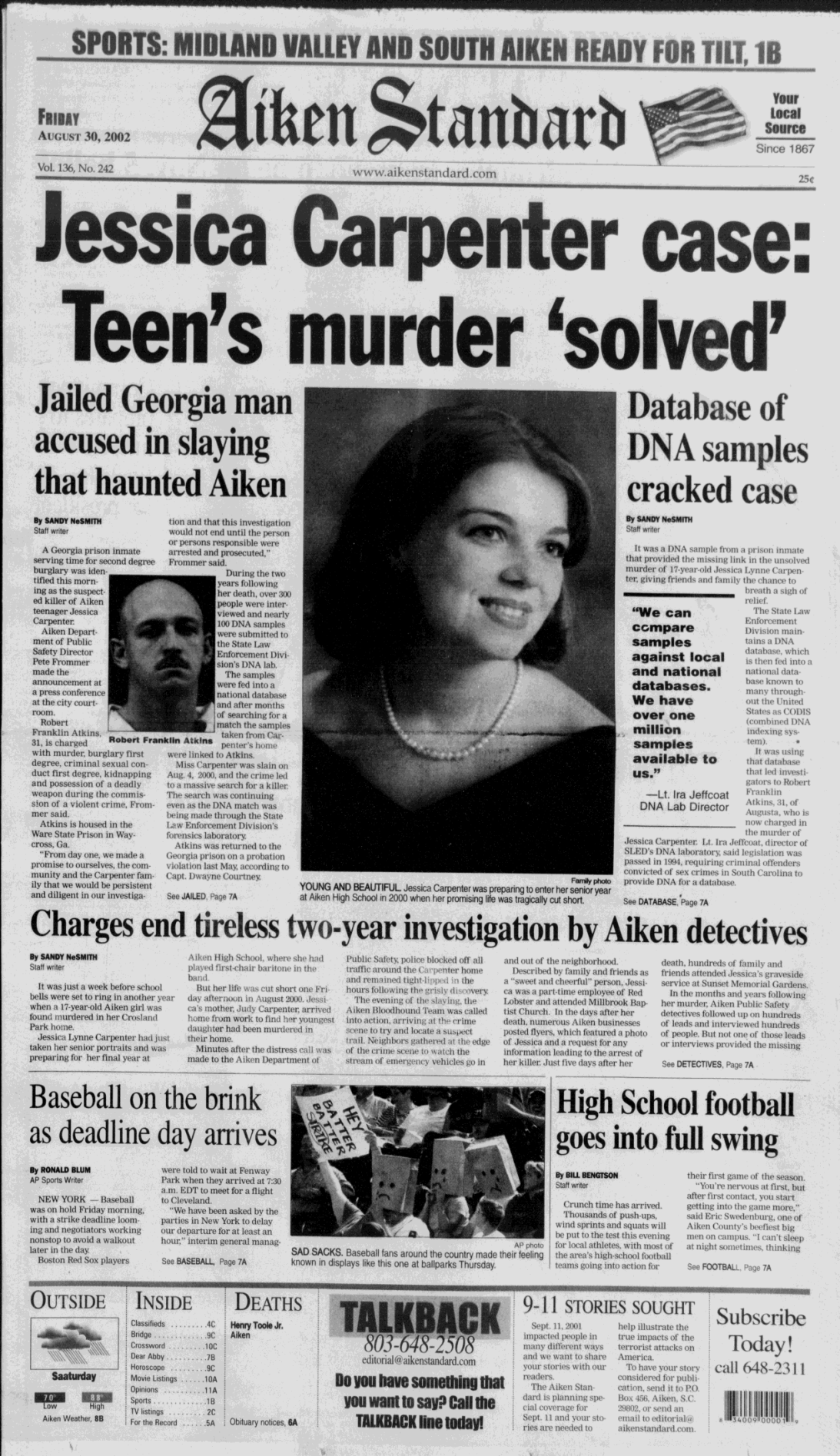 Judy Carpenter holds Jessica's senior pictured in a memorial garden built behind Judy's place of work. The photo was taken the summer before Jessica would have started her senior year at Aiken High School in 2000. The photo remains framed and displayed at Judy's home in Aiken.

Twenty years have passed since the tragic murder of Jessica Lynne Carpenter, but her mother continues to make sure her story is known and that her memory lives on.

Judy Carpenter honored the anniversary of her daughter's death by continuing a yearly tradition of placing a memorial in the Aiken Standard.

"I wanted some kind of thing for the community to remember her," Carpenter said. "It was an event that no one in Aiken will ever forget. I think they look for this every year in the paper. It’s a nice remembrance for Jessica."

Jessica was a fun-loving 17-year-old, her mother said.

She was the youngest of three sisters and attended Aiken High School, where she was a rising senior and played in the school band.

She enjoyed greeting people at her part-time job as a hostess at the local Red Lobster.

In her spare time, Jessica liked to go shopping, listen to music and attend concerts.

She had a deep love for her family and was often described as having a "bubbly" personality.

"She really wasn’t fearful of anyone," Carpenter recalled. "She loved everyone. She trusted everybody."

However, that trust would be broken and Jessica's life would be tragically cut short.

On the evening of Aug. 4, 2000, Judy arrived home from work to find her youngest daughter had been murdered in their Crosland Park home.

Officers with the Aiken Department of Public Safety soon flooded the area.

The Aiken Bloodhound Tracking Team was called into action in an effort to locate a suspect trail but had no success.

Her mother described the community's efforts as uniting "like family." It's something she'll always be grateful for and never forget.

"Not all communities would have reacted like that," she said of Aiken's efforts. "In larger communities it would’ve just been another number in the day. They treated her with dignity and respect."

At one point in the investigation, investigators considered serial killer Reinaldo Rivera, who was arrested in October 2000 for raping and killing several women in the Aiken-Augusta area, as a potential suspect.

Jessica fit the physical description of Rivera's victims and was living in the area during his crime spree.

However, after his arrest, Rivera's DNA was cross referenced with the DNA from the crime scene. It wasn't a match and the investigation would continue on.

Over the years, the Aiken community would continue to work to keep Jessica's memory alive.

On Aug. 5, 2002, a Magnolia tree was planted at the Crosland Park recreational area.

"To have known her was to know an angel," a plaque beside the tree reads.

A memorial scholarship was created in her name and is currently still listed as one of the University of South Carolina Aiken's many endowed scholarships.

"Part of our hearts were taken with her," her mother said. "We just learned to try to live on in the best possible way."

A little more than two years after Jessica's death, closure would finally come.

Upon arrest, Atkins' DNA was placed into a national database that allowed investigators to match it to DNA samples collected at the Aiken crime scene.

Investigators determined Atkins had been working as a delivery driver for a company contracted to make deliveries for Airborne Express, which led him to be in contact with Jessica the day of her murder.

Atkins would later lead investigators to the murder weapon, a bloody knife wrapped in a T-shirt that had been buried under a pile of brush on U.S. Highway 1 near Crosland Park.

In 2006, he pleaded guilty to murder and was sentence to life in prison.

Atkins, now 49, is currently being held in Lee County as of July, according to the South Carolina Department of Corrections.

Carpenter said she still has the front page that announced her daughter's case had been solved.

"To see it on the front page like that was kind of hard," she said. "We were happy knowing it was solved but sad because of the reality. It did bring closure and I’m glad I have that closure, because a lot of families do not. That’s helped me move on to where I’m at today."

Since the case has closed, Jessica's story has garnered much attention across the nation.

Carpenter recalled feeling anxious to watch the episodes, worrying it may bring back feelings of grief and depression caused by Jessica's death.

However, she's glad Jessica's story is continuing to be told and hopes her daughter's life will continue to be told to others.

Jessica's older sisters have since moved away to other parts of South Carolina and have raised children of their own, Carpenter said.

Carpenter still lives and works in the Aiken area, and says the family still tells stories about the wonderful and bubbly woman their "Aunt Jessica" was.

She and other members of the family still visit Jessica's grave at Sunset Memory Gardens on holidays and on Jessica's birthday.

Behind Carpenter's place of work a memorial garden was created and fitted with a stone statue of an angel looking down.

Although Judy doesn't visit it as much as she used to, the area serves as a place to remember and honor Jessica's life.

In Crosland Park, Jessica's tree continues to grow and bloom.

Judy's hope is Jessica's story will never be forgotten. She plans to continue her tradition of placing a yearly memorial in the newspaper.

"I want her to be a legacy for the upcoming generation and generations ahead so they can know what can happen and what kind of predators are out there," Carpenter said. "She would be so happy to know that she’s helped somebody through her experience."