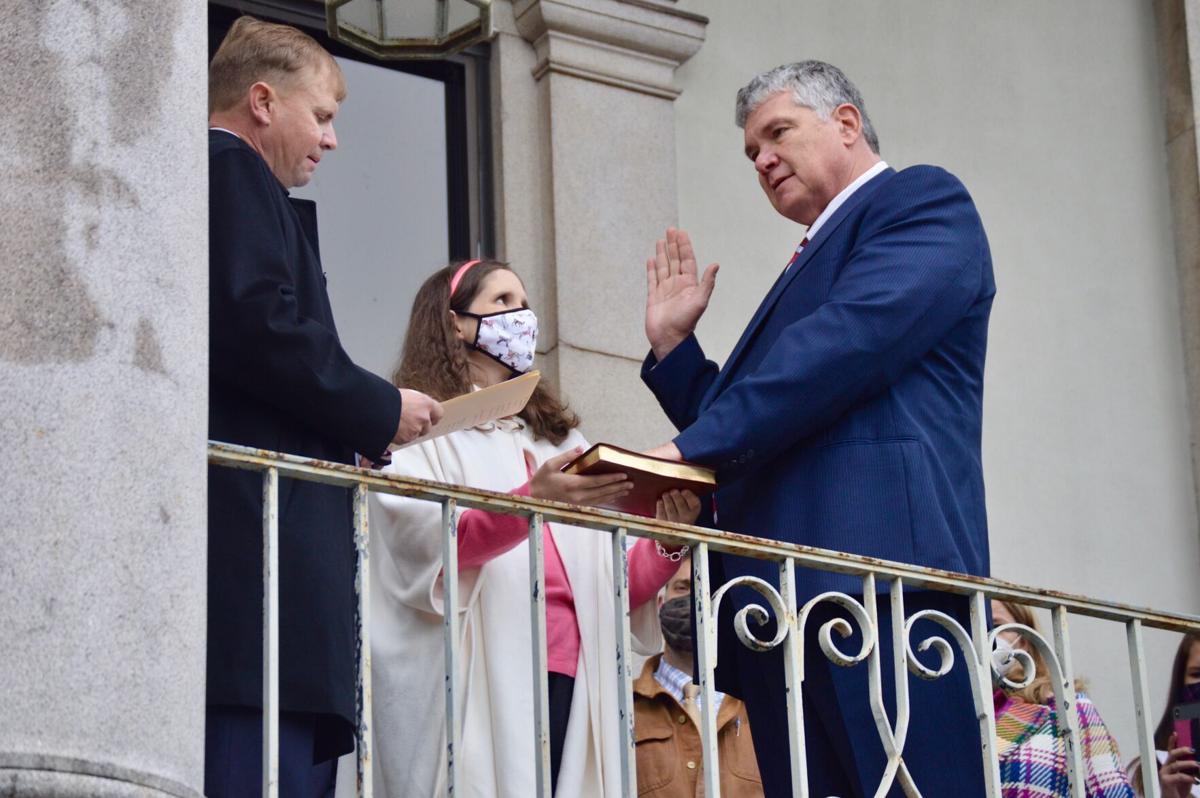 Bill Weeks's daughter, Megan, holds a Bible she gifted to her father on Christmas as he takes the oath of office as the 2nd Judicial Circuit's new solicitor. 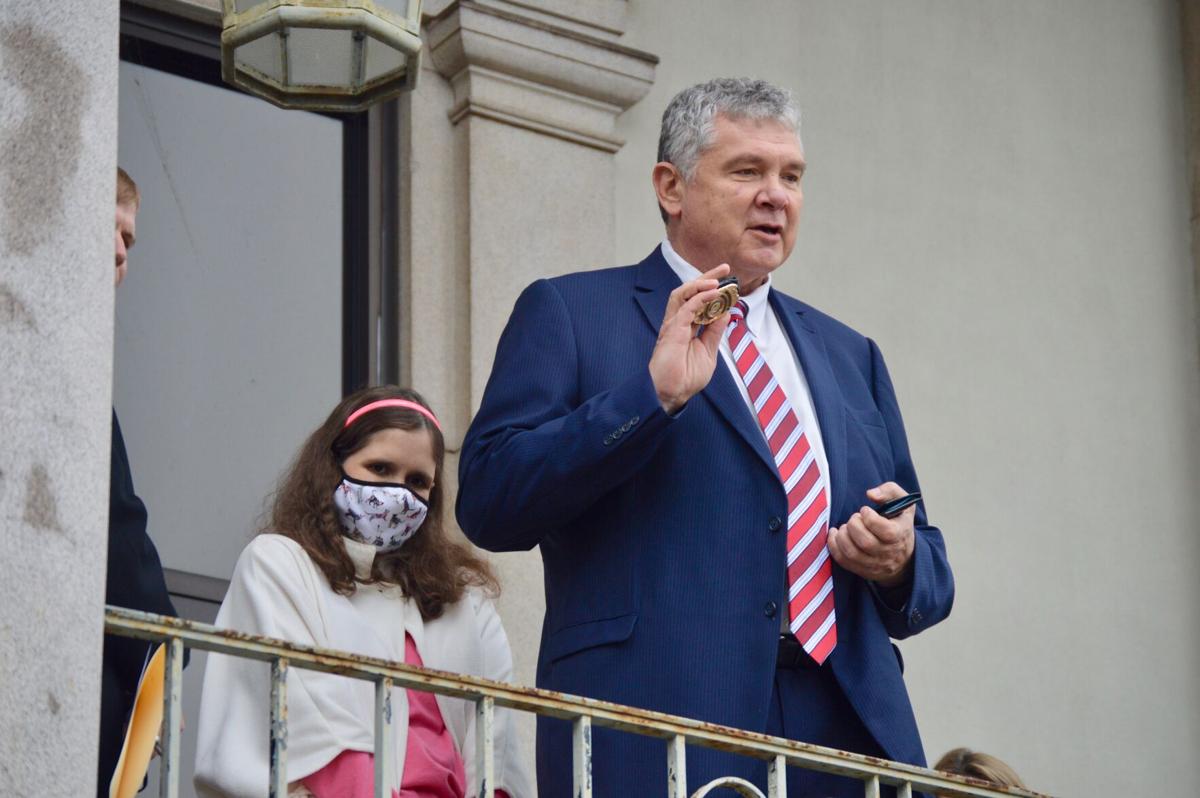 Weeks holds up his newly administered solicitor's badge as he thanks a crowd for coming to witness his swearing in. 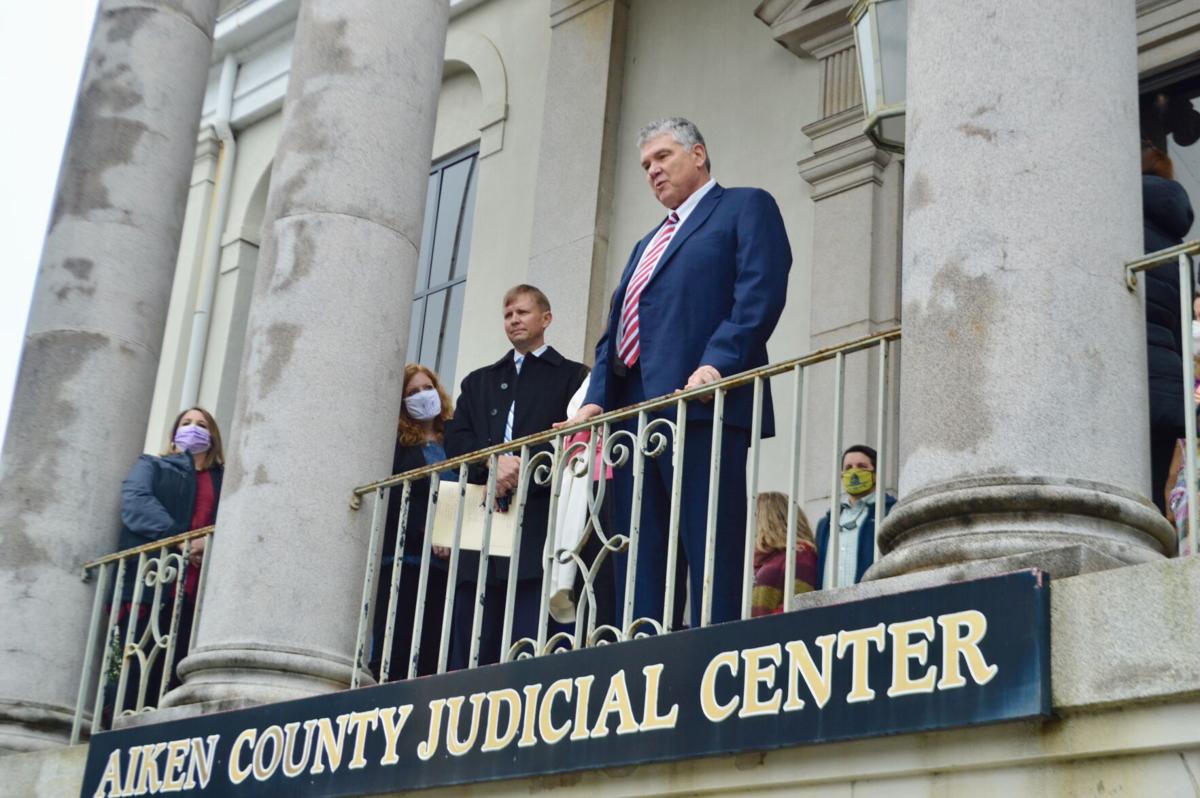 Bill Weeks's daughter, Megan, holds a Bible she gifted to her father on Christmas as he takes the oath of office as the 2nd Judicial Circuit's new solicitor.

Weeks holds up his newly administered solicitor's badge as he thanks a crowd for coming to witness his swearing in.

On the front steps of the Aiken County Judicial Center, Bill Weeks was sworn in as the 2nd Judicial Circuit's new solicitor on Wednesday.

Accompanied by his wife, Amy Jo, and their two children, Megan and Bill, Weeks recited the oath of office as it was read to him by outgoing solicitor Strom Thurmond Jr. A crowd of supporters and workers within the 2nd Judicial Circuit looked on and cheered during the cold and cloudy afternoon.

"This is an exciting day for the men and women of the solicitor’s office, and this is a profoundly important day for the citizens of the 2nd Judicial Circuit who have elected an able lawyer, a man of great principle, a man of integrity, a man who is totally devoted to upholding the rule of law," Thurmond said.

Weeks declared his candidacy shortly after Thurmond announced in early 2020 that he would not seek re-election after serving three, four-year terms as solicitor.

Weeks ran his campaign under the slogan “Experience Matters,” citing his 39 years of experience in trial courts.

Weeks will serve as the chief prosecutor of South Carolina’s 2nd Judicial Circuit, which encompasses Aiken, Bamberg and Barnwell counties.

Consisting of nearly 50 employees, the 2nd Circuit Solicitor’s Office is responsible for the prosecution of all crimes in General Sessions Court, as well as DUI and domestic violence offenses in the magistrate courts. The office additionally handles the prosecution of juveniles in family court, runs the Victim-Witness Assistance Program, the Worthless Check Unit and numerous diversion programs to include Pre-trial Intervention, Alcohol Education, Traffic Education, Juvenile Arbitration and Adult Drug Court.

In an earlier interview with the Aiken Standard, Weeks said his two goals coming into office were to get the court's backlog in cases caused by the onset of the coronavirus under control and to continue positive relationships with the area's law enforcement and community leaders.

"This is an unprecedented time with the coronavirus and all the other stuff that’s going on," Weeks said Wednesday to the crowd gathered on the courthouse's front steps. "I don’t know what 2021 and the years to follow will do to our criminal justice system but I’m looking forward and am excited to get to work."