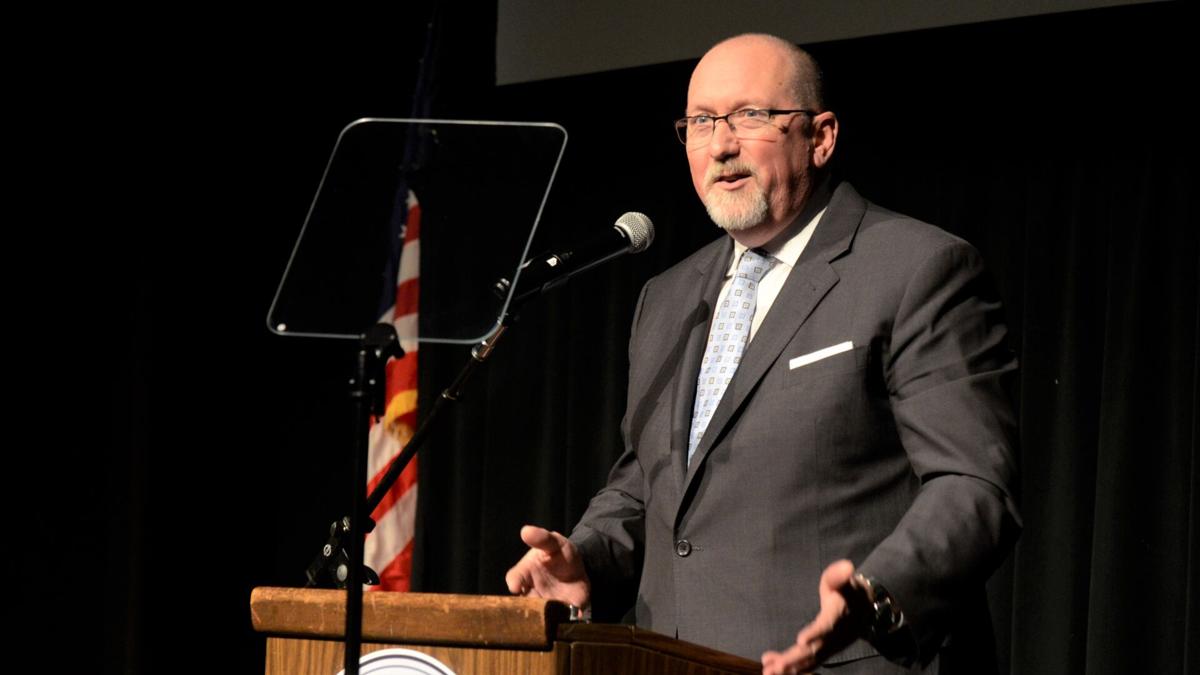 Aiken Mayor Rick Osbon announces part of the city's new potential plans for the properties that were to be included in Project Pascalis Monday evening at the state of the city address. (Matthew Christian/Aiken Standard) 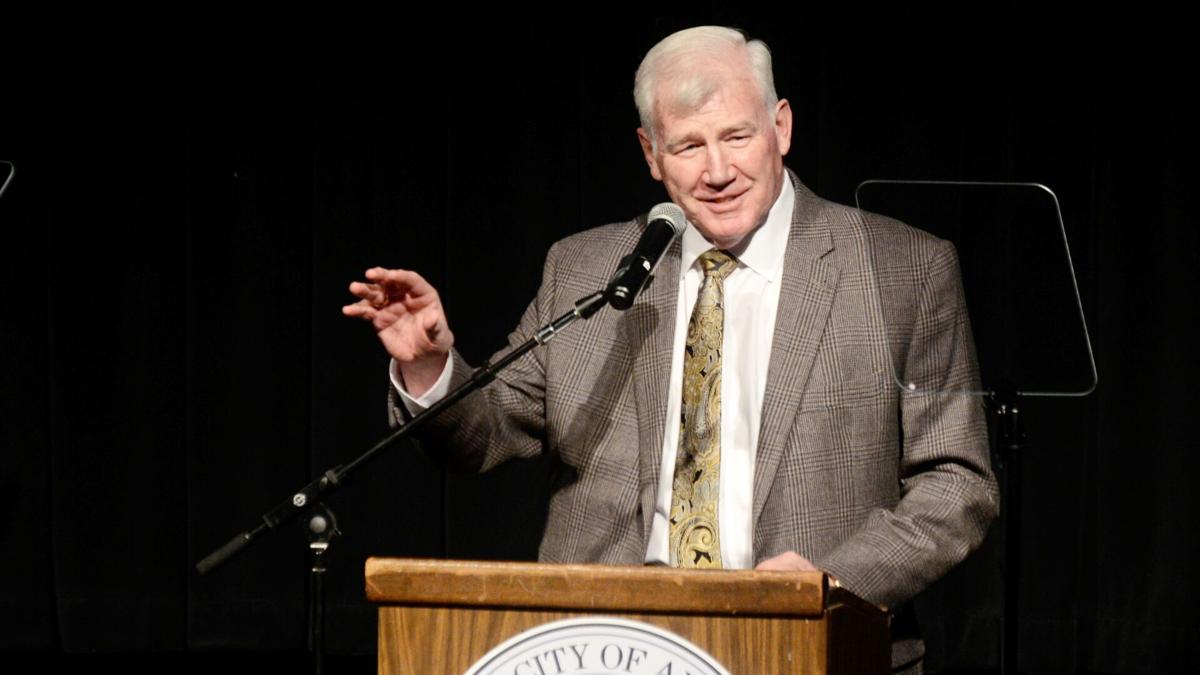 Aiken Mayor Pro Tempore Ed Woltz announces part of the city's new potential plans for the properties that were to be included in Project Pascalis Monday evening at the state of the city address. (Matthew Christian/Aiken Standard) 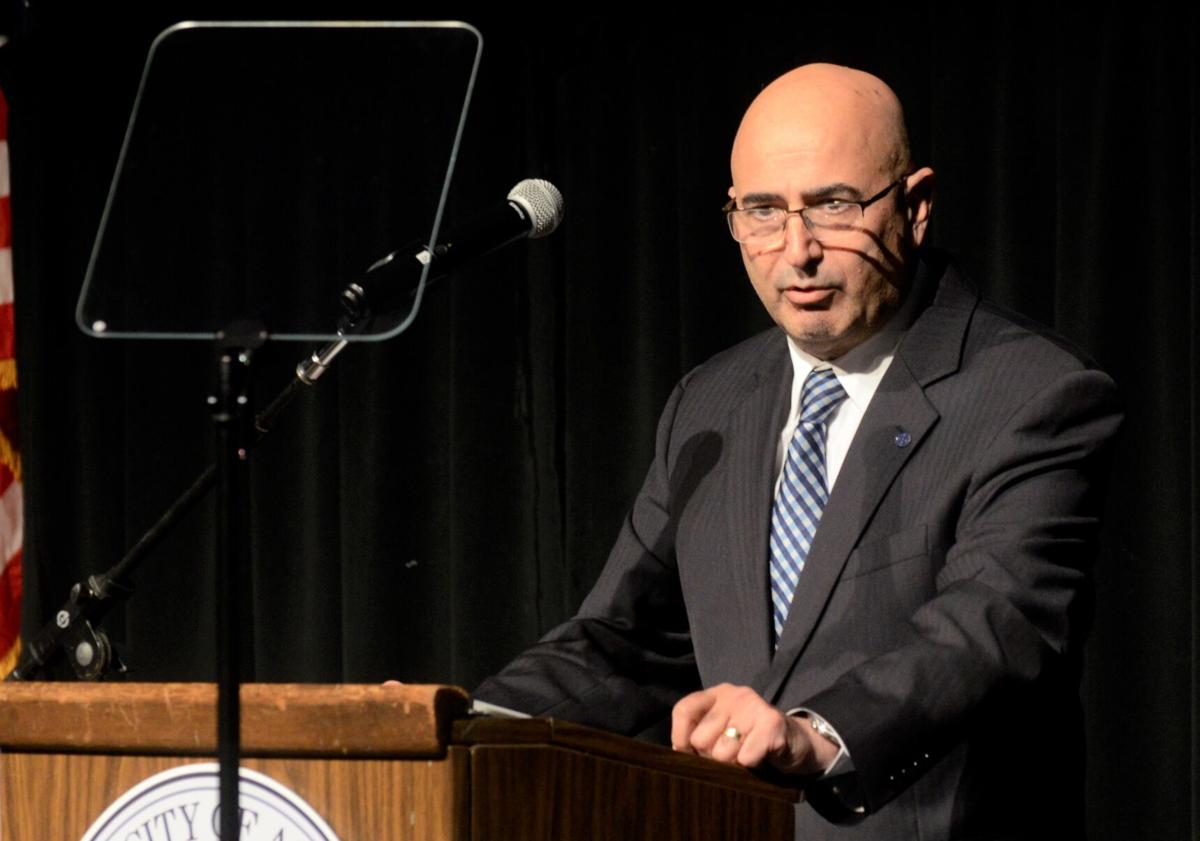 Savannah River National Laboratory Director Vahid Majidi speaks about plans for the lab to establish a workforce center on some of the properties that were to be included in Project Pascalis Monday evening at Aiken's state of the city address. (Matthew Christian/Aiken Standard)

Aiken Mayor Rick Osbon announces part of the city's new potential plans for the properties that were to be included in Project Pascalis Monday evening at the state of the city address. (Matthew Christian/Aiken Standard)

Aiken Mayor Pro Tempore Ed Woltz announces part of the city's new potential plans for the properties that were to be included in Project Pascalis Monday evening at the state of the city address. (Matthew Christian/Aiken Standard)

Savannah River National Laboratory Director Vahid Majidi speaks about plans for the lab to establish a workforce center on some of the properties that were to be included in Project Pascalis Monday evening at Aiken's state of the city address. (Matthew Christian/Aiken Standard)

Aiken's newest potential plans for the properties that were to be included in Project Pascalis drew a standing ovation Monday evening as they were announced by Aiken Mayor Rick Osbon and Mayor Pro Tempore Ed Woltz at the annual state of the city address.

The announcement was made shortly after Osbon called Woltz on to the stage at the Amentum Theater.

Woltz has taken the lead on part of the plan because Osbon has a conflict of interest. Osbon is the owner of Osbon's Laundry and Cleaners, a "friendly competitor" to Warneke Cleaners.

"First, let me be clear, none of this is a done deal and City Council has had initial discussions about it, but nothing is even close to being finalized," Woltz said. "In fact, I'm asking tonight that city staff schedule a public forum within the next two weeks to gather input, thoughts and concerns as we begin looking at these possibilities as a city and as a council."

Woltz said the initial thoughts were to provide the Savannah River National Laboratory with 40,000-50,000 square feet of office and exhibition space between Bee Lane and Newberry Street for use as a workforce development office. He said around 100 Savannah River National Laboratory workers would be housed in the facility along with a rotating group of faculty and students from the lab's university collaborative.

Savannah River National Lab director Vahid Majidi said the new facility would allow the lab to have a more direct presence in the community and help with the goal of developing a pipeline of new talent. He said the facility would complement the Advanced Manufacturing Collaborative to be constructed at USC Aiken.

"I should emphasize that this SRNL building is being designed for only computational and administrative work," Majidi said, drawing a relieved laugh from the audience. "We won't have any chemicals, hoods or hazardous materials in this facility."

He added the facility would also host some work on non-proliferation training programs and human resources functions. Majidi said the facility will allow for scientific and technical discussions, remote learning and teacher development.

Graham calls on U.S., Germany to send tanks to Ukraine

Woltz added the facility would also have space for USCA to provide education and outreach downtown.

Renderings of the facility were not available Monday evening.

The new potential plan calls for the demolition of the Warneke Cleaners building, the 1981-built motel strip fronting Bee Lane and the old gun shop on Richland Avenue.

The plans for Project Pascalis called for the demolition of nearly all of the buildings between Bee Lane and Newberry Street and between Richland Avenue and the former office of State Farm agent Joe Harrison and the construction of an apartment complex and parking deck.

The C.C. Johnson Building would be historically renovated to its original appearance. The adjacent retail buildings would be renovated and upgraded as part of the plan.

Newberry Hall and Taj Aiken would remain where they are. Warneke Cleaners would be relocated to newly created retail space facing Richland Avenue.

Woltz did not mention the other businesses in the retail buildings between Bee Lane and Newberry Street.

He added the city would create needed additional parking by developing a surface lot across from St. John's United Methodist Church and possibly a lot next to the new Municipal Building.

Funding for the new plan would be provided by a combination of funds the city and the national lab received from South Carolina's $600 million settlement with the federal government over plutonium that wasn't removed from the state or disposed of in the Mixed Oxide Fuel Fabrication Facility at the Savannah River Site.

The city received $25 million for downtown and northside improvements and the national lab received $20 million for the workforce development center.

Osbon returned to the stage to announce the plans for the Hotel Aiken and the building behind it on Laurens Street that were slated to be demolished in the Project Pascalis plans.

He said the new potential plan did not include a definitive future for either building but that the future of the buildings would be determined through a request for proposal drafted and issued within the next 45-60 days.

This also drew applause from the audience.

"There will be no pre-conceived ideas about what needs to be done with it, just a list of the parcels, a description of the buildings as they stand and a call for interested parties to make an offer and tell us their plan for it," Osbon said, again drawing applause.

He said the request for proposal would not suggest a future use for the building.

He added the request for proposal would encourage proposers to help the city with the important work of repurposing and complementing the historic downtown assets.

Osbon also promised that, shortly after the city receives proposals, those meeting some basic qualifications will be released to the public.

"Each and every one of us will be able to evaluate what the plans are, what purchase price is offered, and what incentives a potential buyer might ask for … all of it," Osbon said. "That said, if we all review the proposals together as a community and find one worth pursuing, we'll do just that. If not, we'll reject them all and start again. That's my promise to you."

"While I don't have a final answer for you this evening, I can tell you that I have had extensive discussions with the leadership of Aiken County government," Osbon said. "City Council has discussed the best use of the building moving forward and there appears to be consensus that offering it for sale to the County to house the Solicitor's Office is the best path forward."

He added the solicitor's office would likely play a key role in keeping the Aiken County Courthouse downtown as County Council Chairman Gary Bunker has suggested.

"We hope to have an agreement drafted between the City and the County for both Councils to review and consider in the near future," Osbon said.

The potential Project Pascalis plans called for the conversion and expansion of the former municipal building at 214 Park Ave. into a conference center run by Newberry Hall.