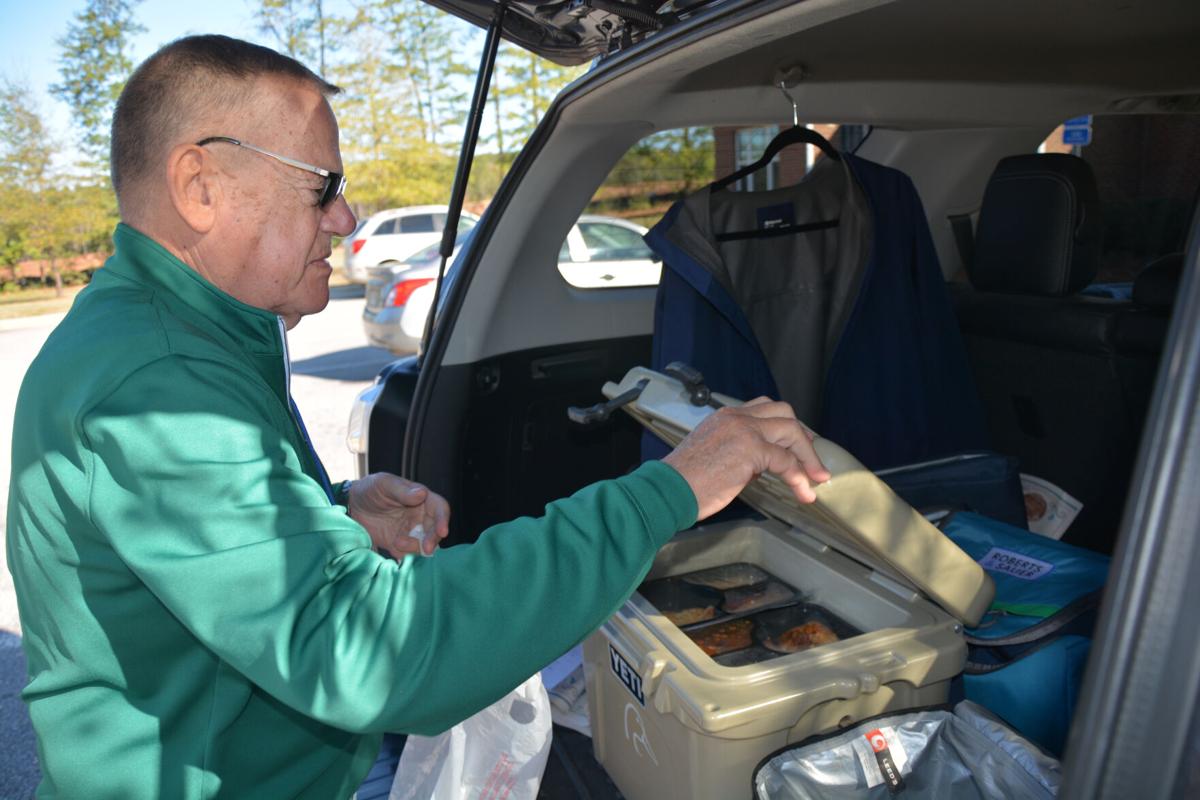 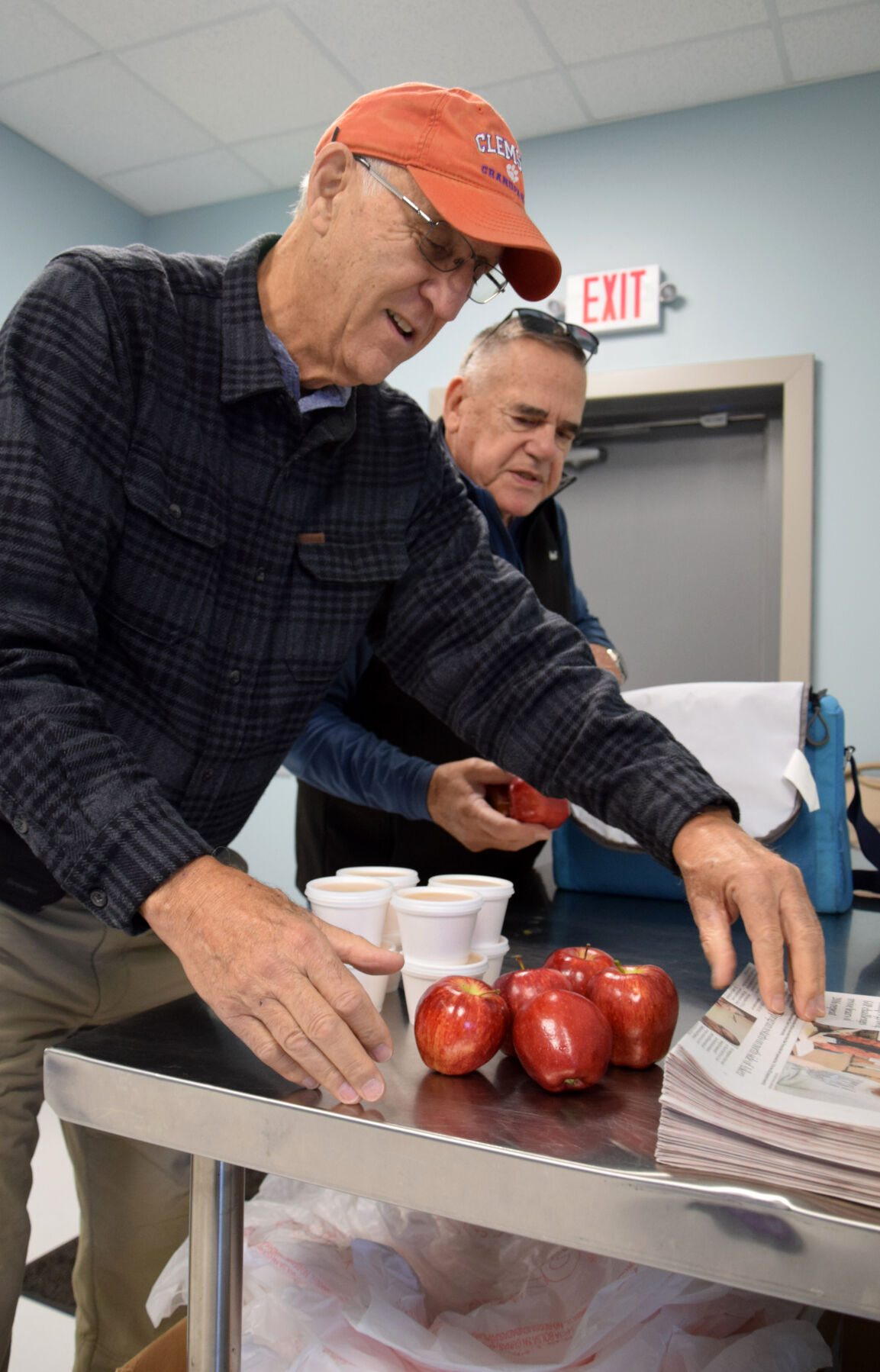 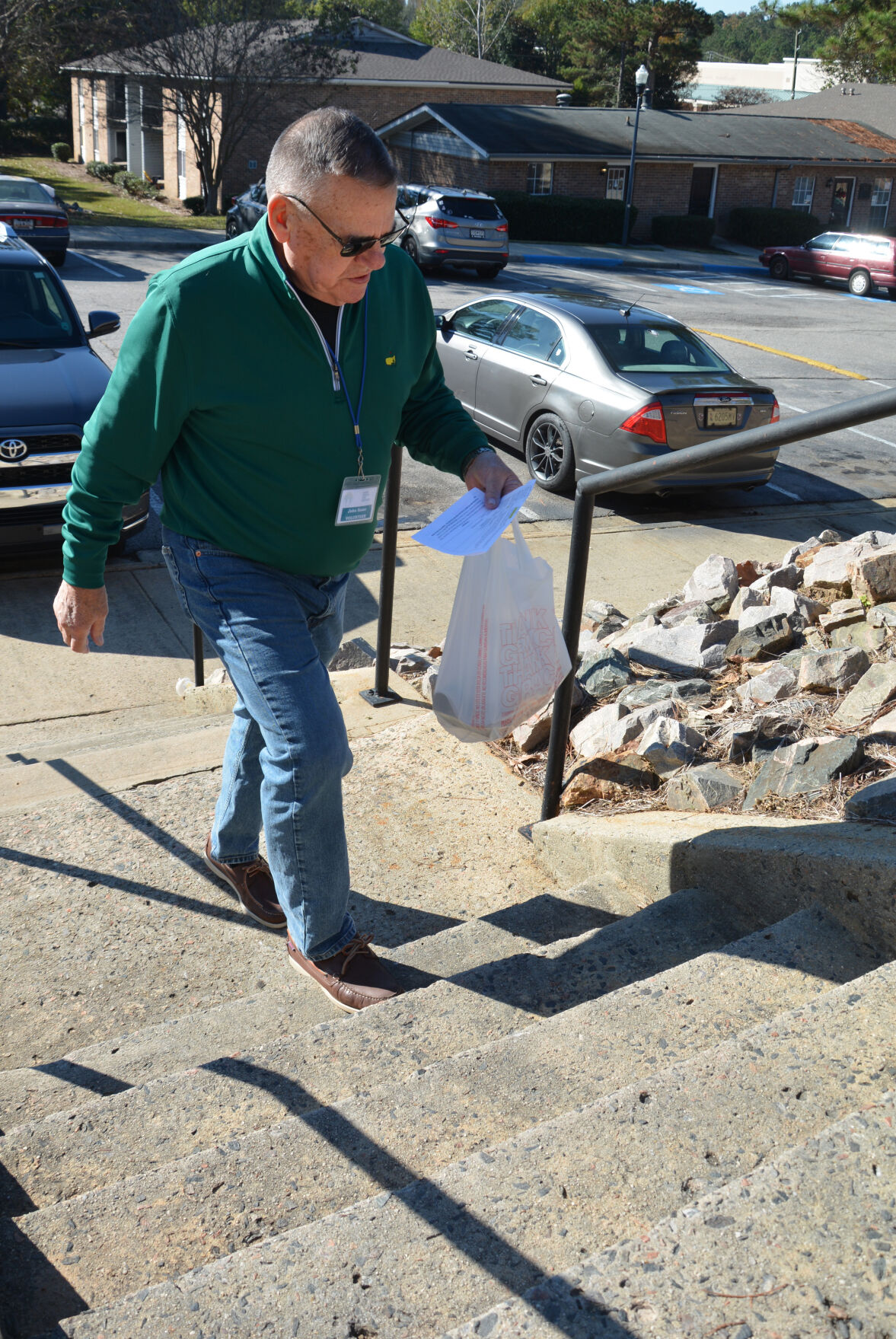 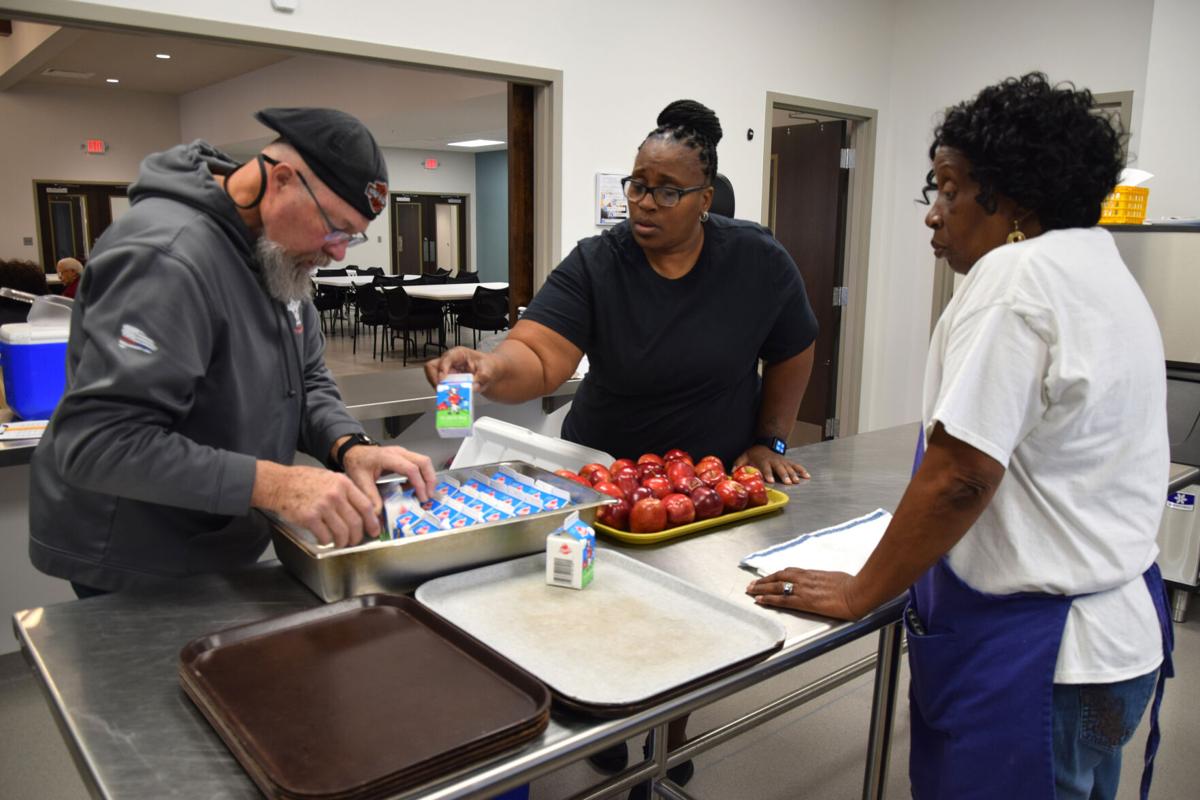 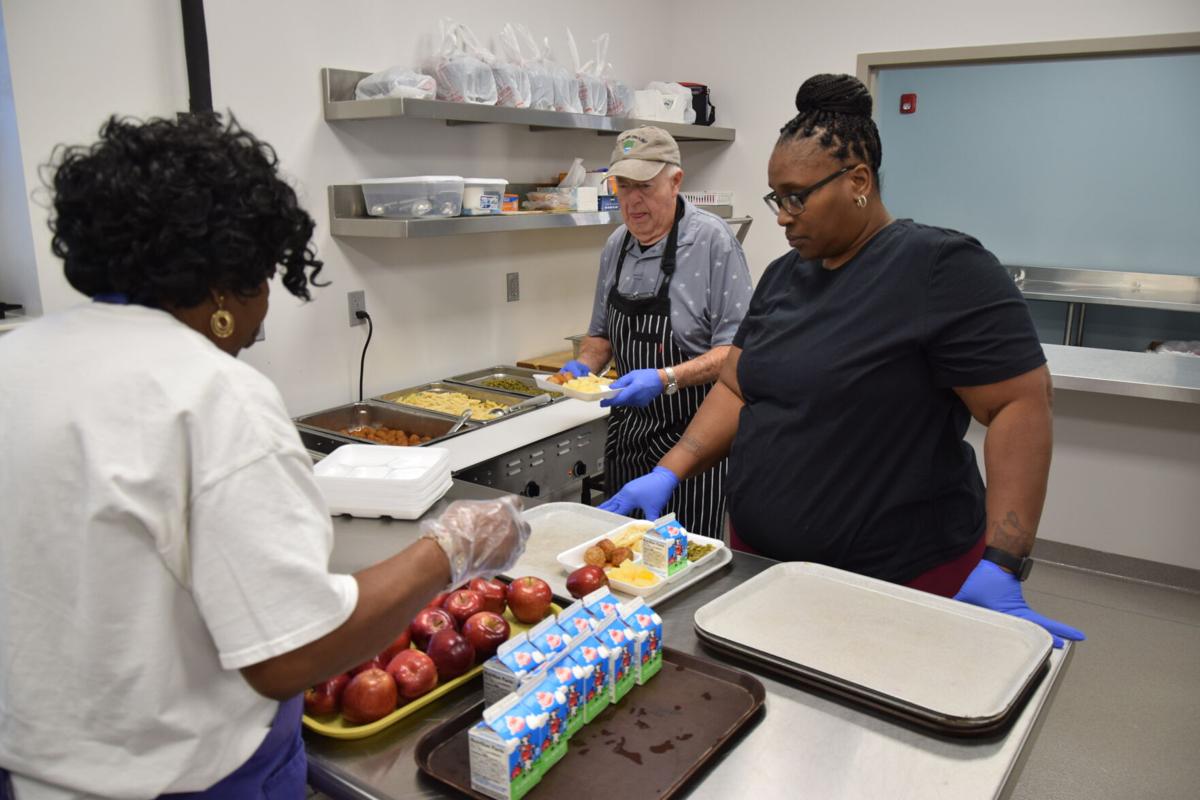 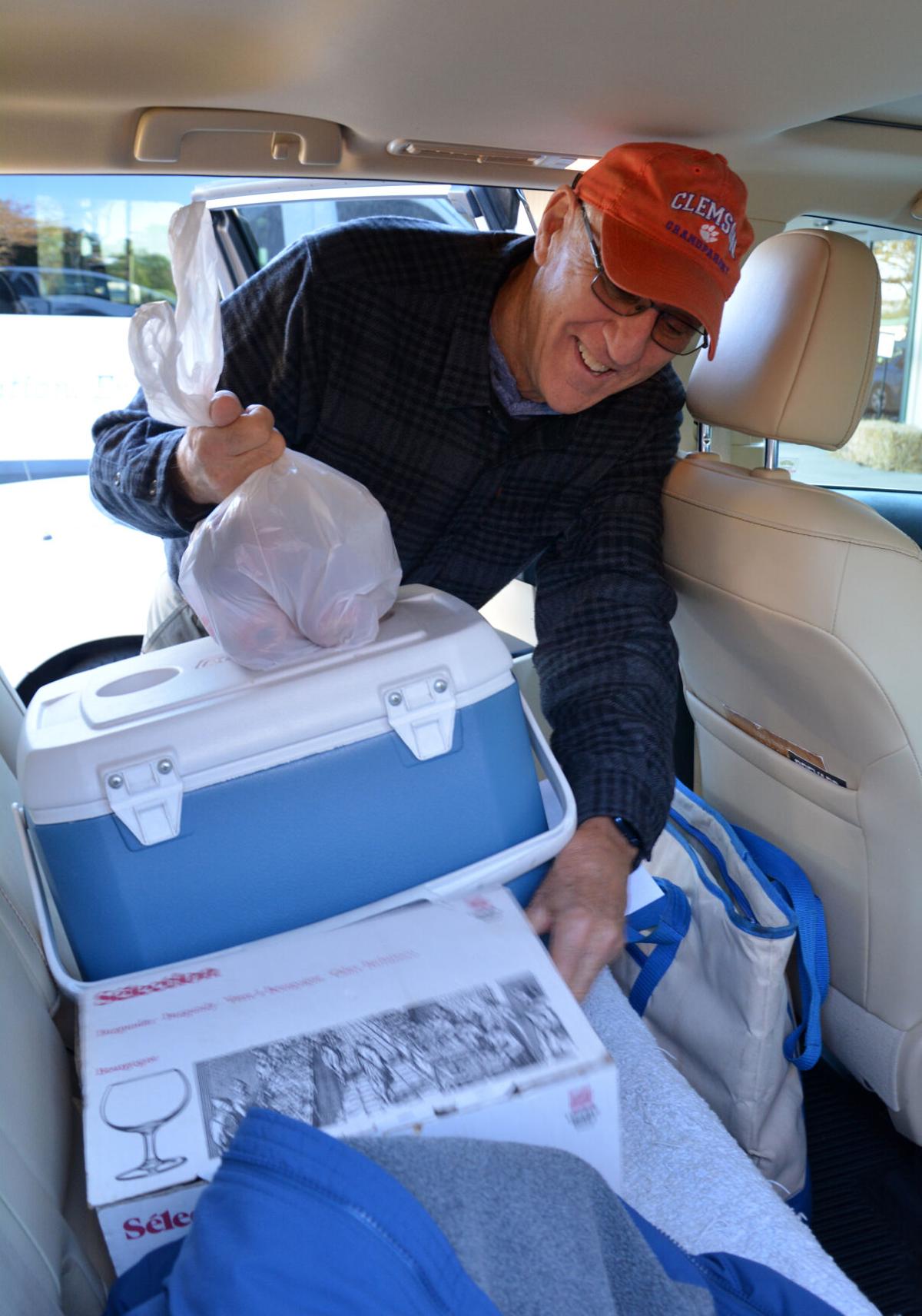 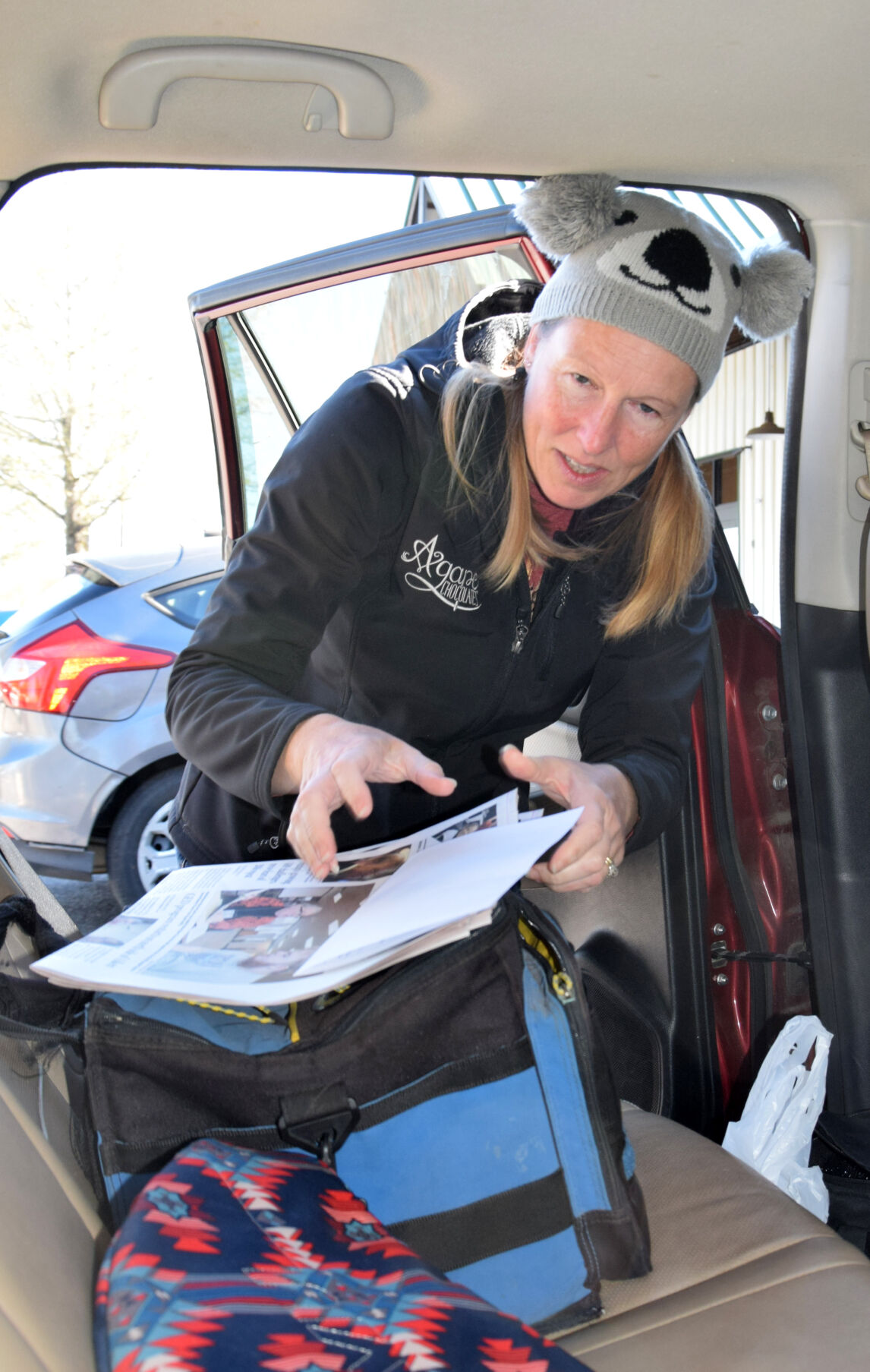 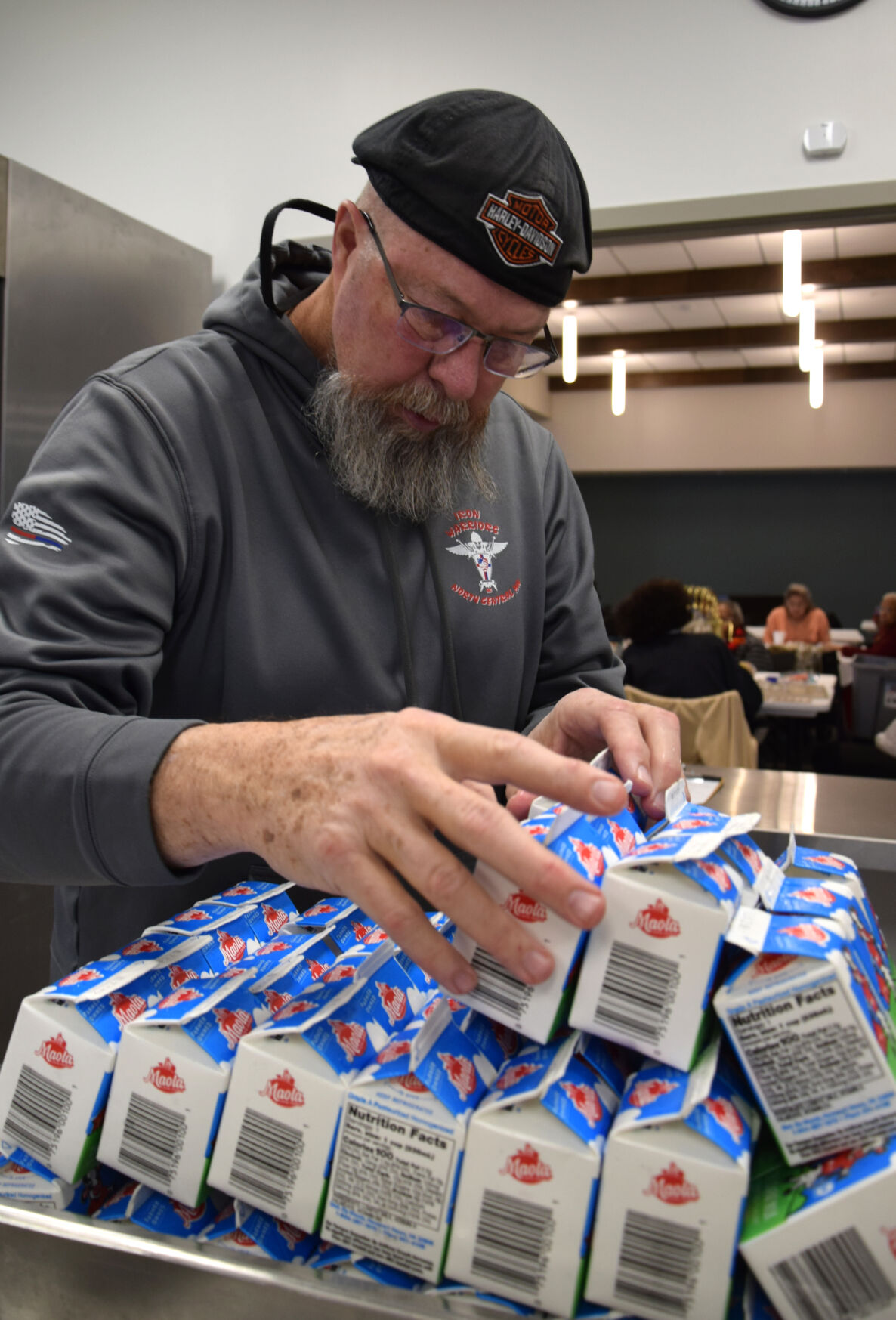 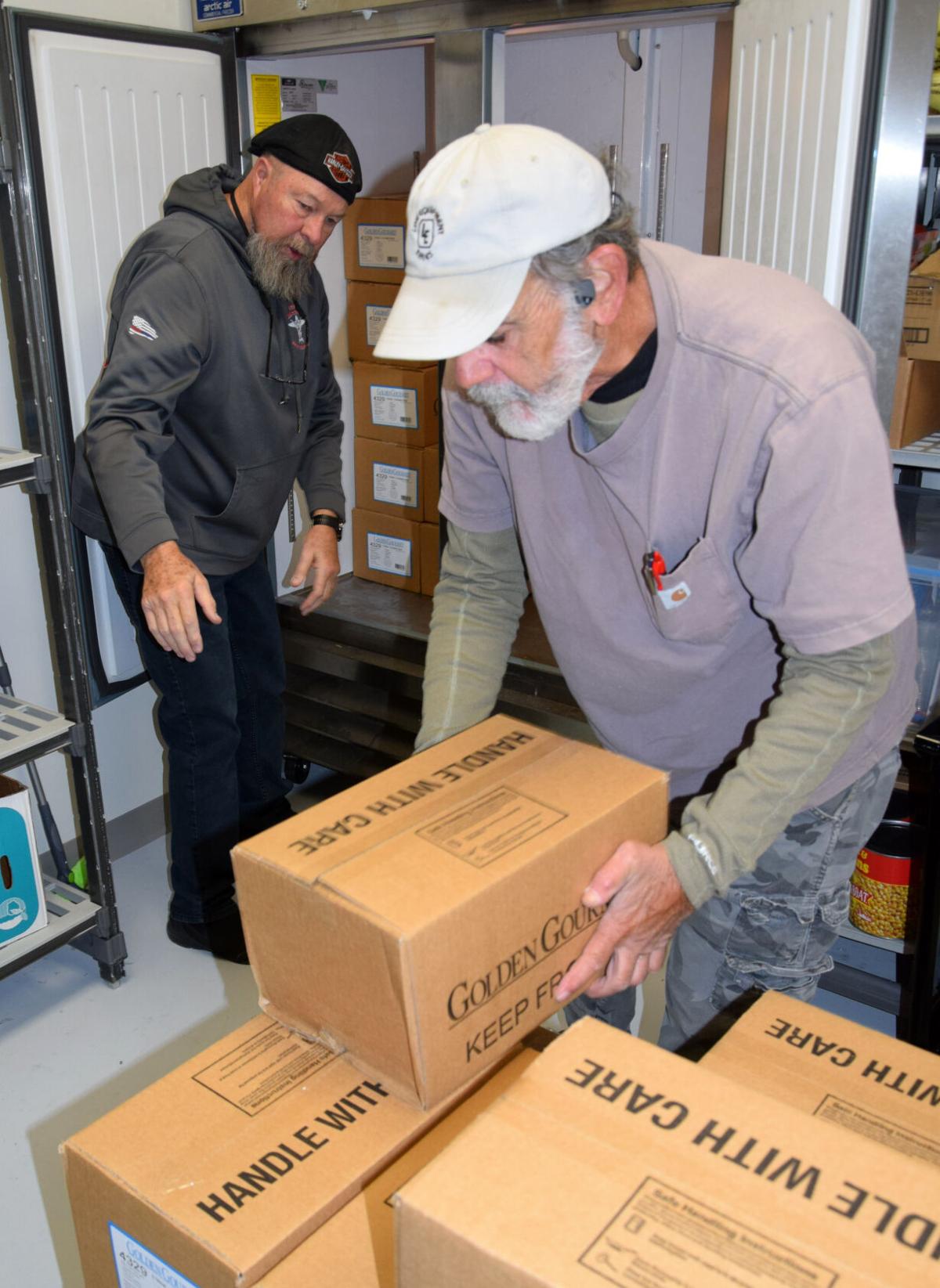 In action Nov. 21 in support of the Meals on Wheels program are Mike Cline, left, and Billy Derrick. (Bill Bengtson/Staff) 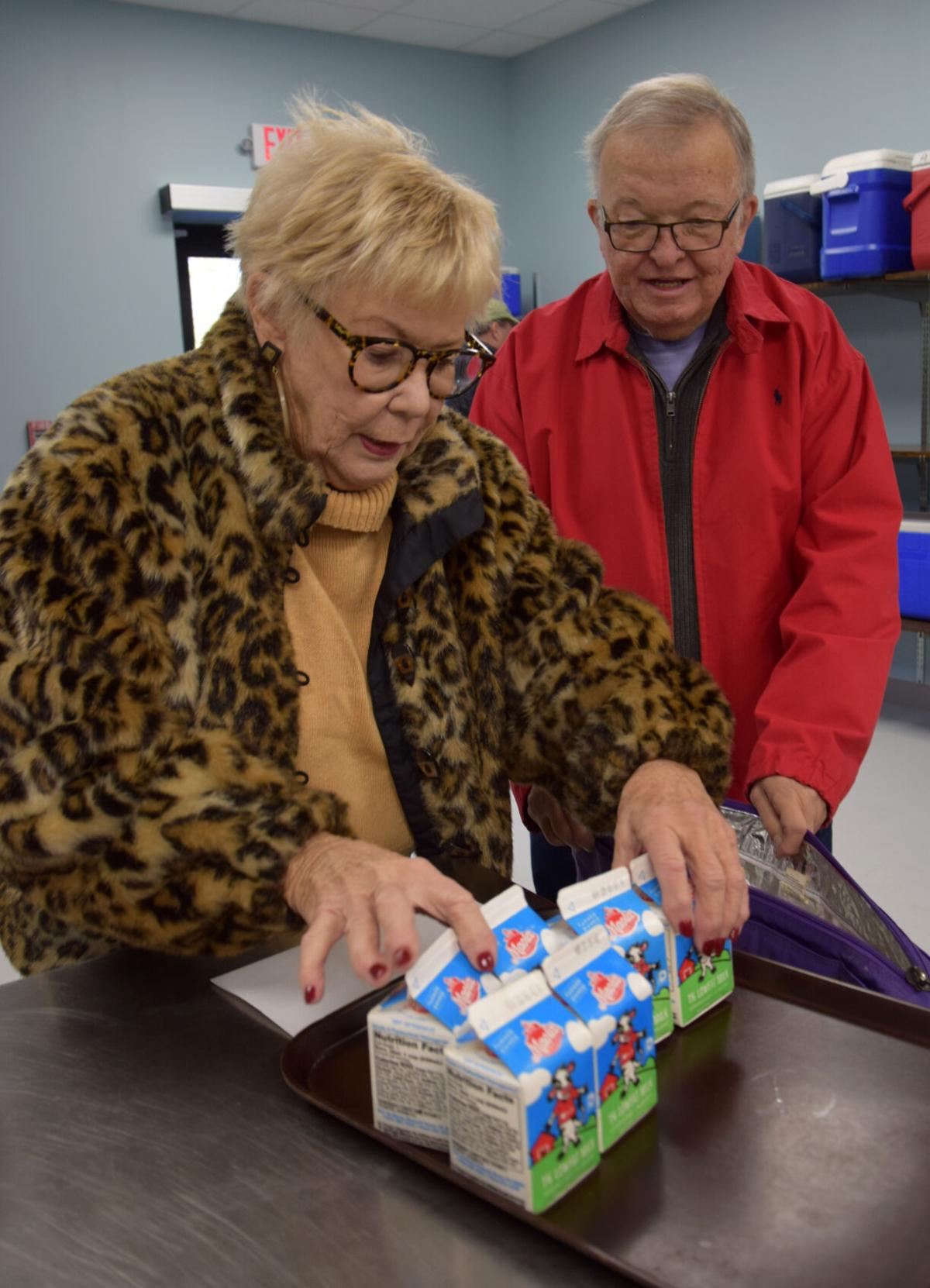 Aiken-based Meals on Wheels volunteer Linda Walters and her brother Bob Roth prepare milk for distribution Nov. 21. Walters serves the Aiken area and Roth was helping while visiting from Evanston, Illinois, where he also volunteers in a Meals on Wheels program. (Bill Bengtson/Staff) 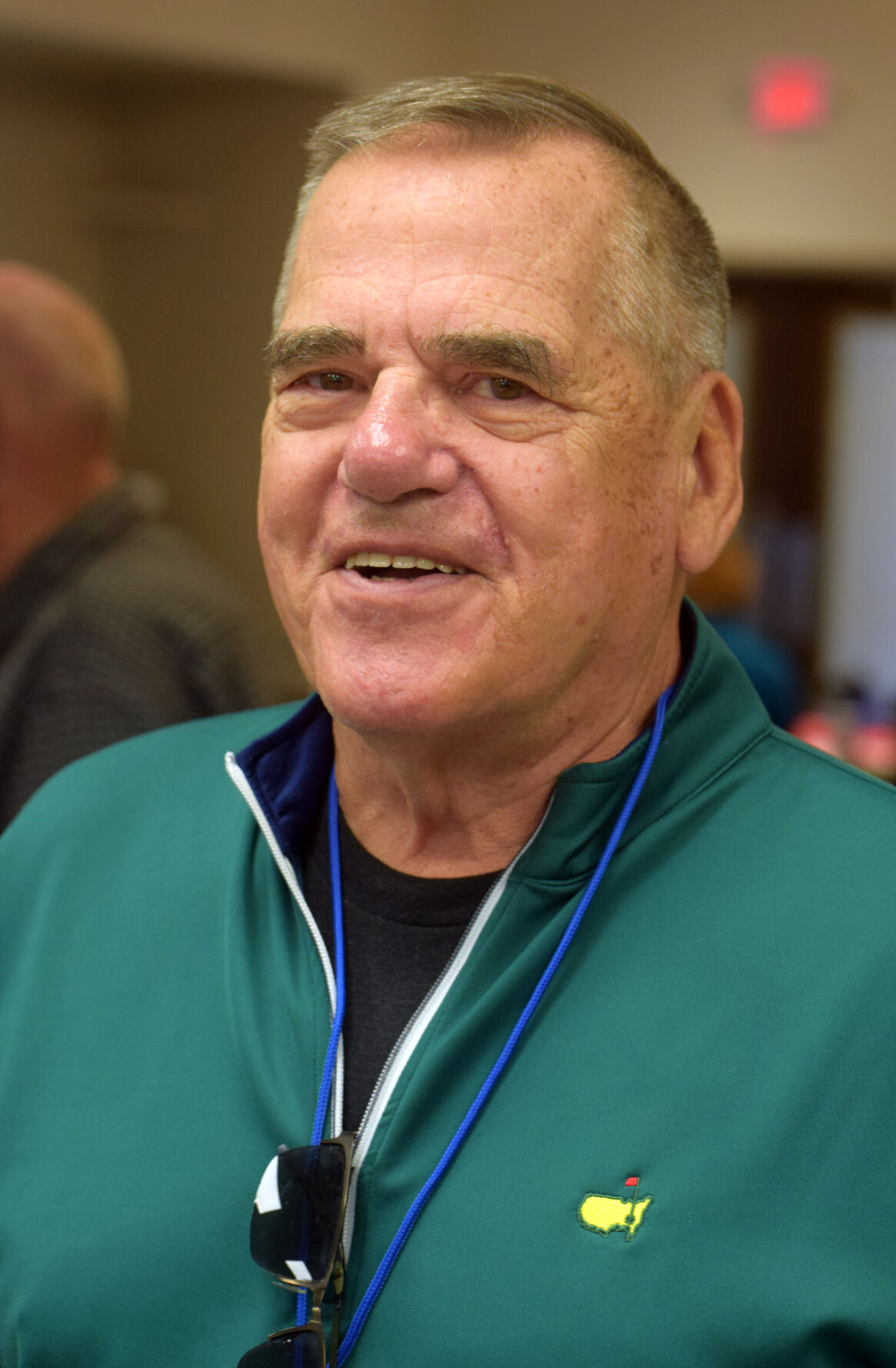 In action Nov. 21 in support of the Meals on Wheels program are Mike Cline, left, and Billy Derrick. (Bill Bengtson/Staff)

Aiken-based Meals on Wheels volunteer Linda Walters and her brother Bob Roth prepare milk for distribution Nov. 21. Walters serves the Aiken area and Roth was helping while visiting from Evanston, Illinois, where he also volunteers in a Meals on Wheels program. (Bill Bengtson/Staff)

Gratitude is part of the daily routine for dozens of Meals on Wheels volunteers each week around Aiken County, where 300 hot, home-delivered meals are served each weekday, alongside 120 frozen boxes – a week's worth of food – delivered each week.

Volunteers and staff of Aiken Senior Life Services put the pieces together, and the end result also includes congregate meals served at locations in North Augusta (where Holy Trinity Lutheran Church is the county's newest such meal site), Jackson, Wagener, Gloverville and Aiken.

Special arrangements have been made for Thanksgiving, so ASLS employees and volunteers alike can have Thursday and Friday off. Meals on Wheels clients received extra-large food deliveries on Wednesday to fill the gap.

The service dates back to 1971 locally, and the current volunteer corps numbers 168, most of whom are retired.

"We need more volunteers," said Hannah Stone, ASLS' nutrition director. "Lots of clients rely on our volunteers to get them to a doctor's appointment or to get their dogs to the vet, or something like that, because our volunteers become their family."

Stone's team works under the guidance of Aimee Hanna, ASLS' executive director, with responsibility for advancing the agency's agenda of transportation, enrichment and nutrition.

"It's the people," said volunteer John Sauer, a retired land surveyor from Fort Wayne, Indiana. "They're just all very nice, so I get a lot of satisfaction out of just interacting with the people, and Aimee's staff, they're just great. They do whatever I ask within reason, and they're just really cooperative folks."

Surprises included "the lack of good street signage around Aiken," he said. "I had to explore. I had to pull into a house that I knew was the wrong one and knock on the door and ask somebody where Mr. Smith lived, and they're all very cooperative. It's a friendly place."

Sauer works the circuit on Tuesdays and Fridays, and his routes vary from 15 to 18 meals, covering homes in both Graniteville and Aiken. Graniteville offers "a real experience," he recalled.

"The poverty there is extreme, but the people are just the best people you'd ever want to meet. I mean, they're all cheerful and it's amazing."

Sauer is now in his third year of delivery service, having come on board just before COVID-19 became a part of everyday speech. "I was outspoken at the time that I didn't think you could shut down the whole country like we shut it down, and I think I was right."

Plenty of adjustments were involved in the meal-distribution process, as confirmed by delivery volunteer Bill Joos, an Aiken resident who retired from the textile industry and has been on board with ASLS' meals program for 10 years. "We've streamlined a little bit and got much better organized today," he said.

Joos covers two Friday routes per week, in Aiken, and also fills in as needed. "I retired at 69, and I felt I had the opportunity to give back to the community, and this was certainly an area that showed need, and it's very fulfilling to do this," he said.

Among other volunteers with plenty of mileage to their credit are Aiken-based retirees Debra and David Halm. They are from Maine, where she was a state administrator for Meals on Wheels and he was employed at Bath Iron Works.

Debra recalled that "some of the most heart-wrenching things" have come to her attention. She offered some thoughts on the value of social interaction and recalled a client who was more than 90 years old and "literally bent right in half, and blind."

"I'd knock on the door and ... she had a broomstick that she'd hit against her furniture, to get to the door. I'd ask, 'How are you?,' and she would say, 'I'm blessed to be alive.' Just as sunny as you can be. It was heartbreaking," she said.

Another client had a front door that could not be closed, due to his house's structural problems, and yet another client was wheelchair-bound, and access to her house required using a series of dirt roads, so she received several weeks of meals at a time.

"She lived completely on her own, in the middle of nowhere, and had just a sunny and grateful disposition. Those are things that really keep you going, as a volunteer. You recognize that whatever your day-to-day issue might be, it's nothing compared to what other people are facing."

On the other side of the economic spectrum was a woman in "one of the more well-heeled neighborhoods in Aiken," Debra said. "From the outside, her house looks lovely, but you have to give her a lot of extra time. She lives alone in this big house. She's sitting on her walker and ... walks on her walker to the door, shuffling her feet. She's alone – really disabled and ever so grateful and sweet when you come to the door with her meal."

Another client, well over 90 years old, lived in a middle-class neighborhood in Aiken. Debra noticed something unusual on one occasion of delivering a meal.

"Right behind me was a gentleman all dressed up in a suit with a rose with a ribbon on it. He said, 'Go ahead first. You're delivering the meal.'"

As things turned out, it was the client's birthday, and the client had decided it was "time to make her arrangements for her funeral and burial," Debra recalled. "I delivered her her meal, and ... they proceeded to do their business."