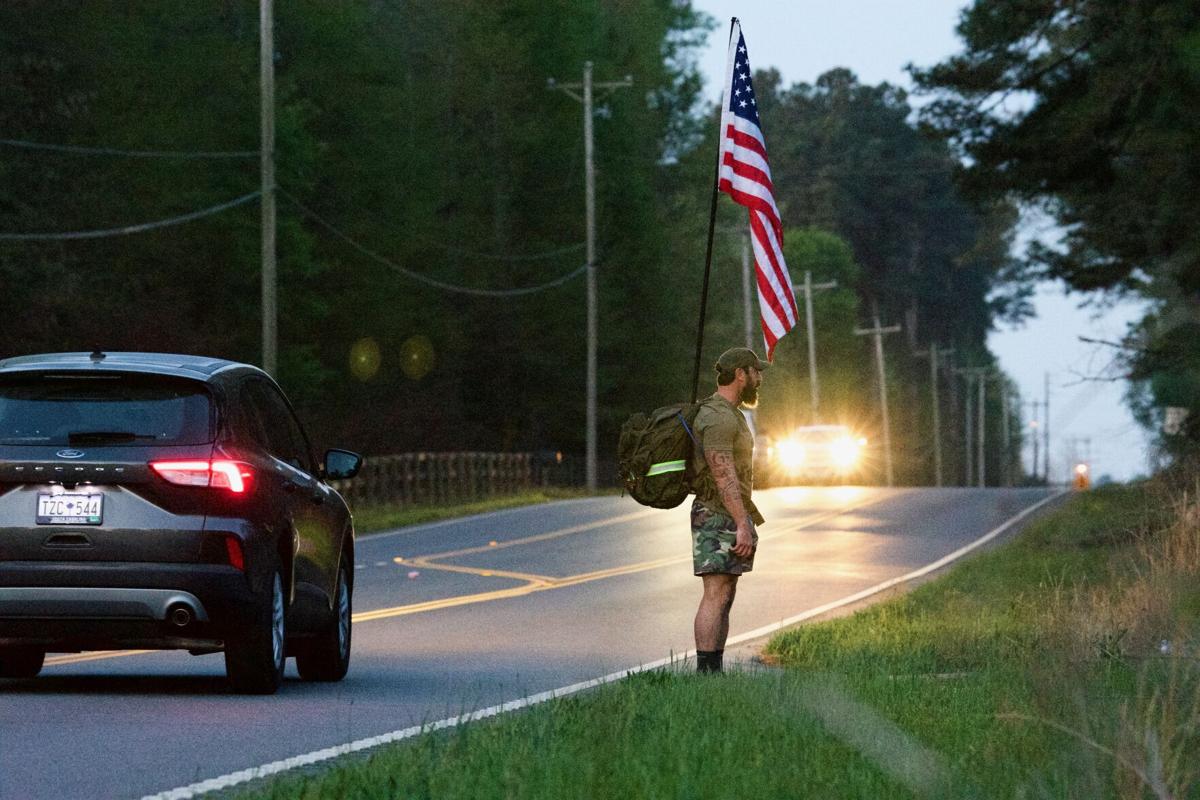 Lowell Koppert, the chairman of the Aiken County Veterans Council and a former Green Beret, stands on the side of Wire Road in Aiken County on his way to Columbia on Wednesday morning. (Colin Demarest/Staff) 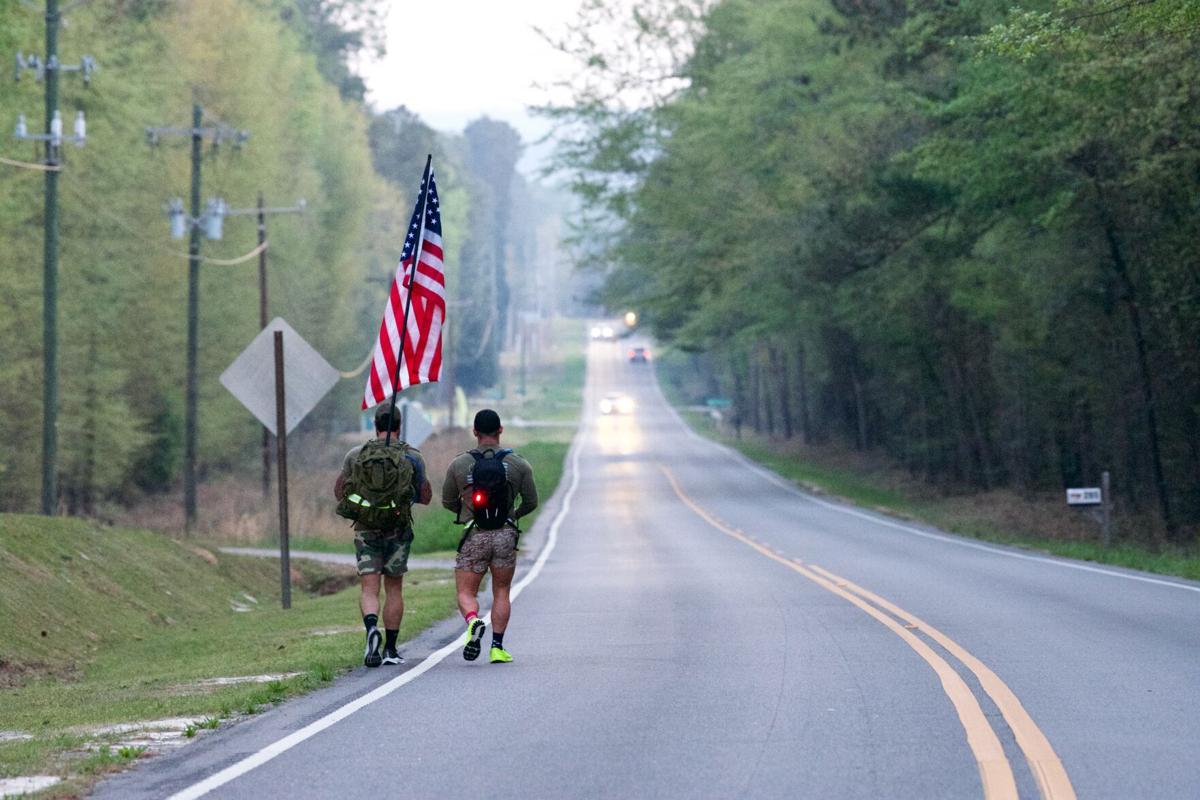 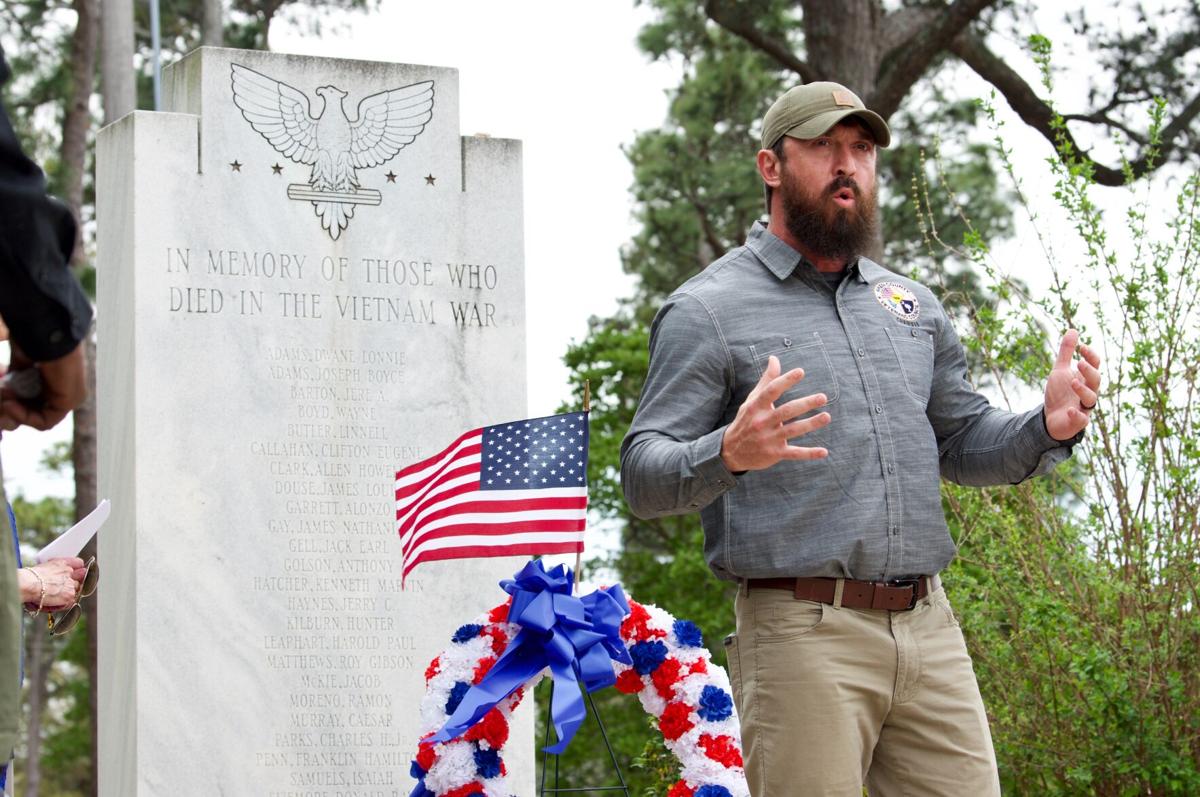 Lowell Koppert, the chairman of the Aiken County Veterans Council and a former Green Beret, speaks in March in front of the Aiken Vietnam War memorial. (Colin Demarest/Staff)

It was still dark when Lowell Koppert and Ray Care arrived at the Vietnam War memorial in downtown Aiken early Wednesday morning. The street lights were still buzzing, and the adjacent eternal flame was burning, tossing light upon the hulking men as they crossed an empty street, proceeded into the parkway and began setting up.

Koppert, a former Green Beret, and Care, a former Navy SEAL, had a long two days ahead of them; the pair would be trekking from the understated monument, caged by five lanes of traffic, to the S.C. Statehouse in Columbia, where they would spearhead a lobbying effort.

The duo’s 53-mile march – which began with 30 push-ups, the lashing on of packs and the mounting of an American flag – is, effectively, a publicity stunt. Few cameras followed, though, and in the pre-dawn hours, only passing cars put them in the spotlight.

“This isn’t a monument issue,” Koppert said at a wreath-laying ceremony March 28, one day before National Vietnam War Veterans Day. “This is a monumental issue about veterans.”

By 7 a.m. Wednesday, the veterans had reached Wire Road, where traffic picked up but generally gave the men a wide berth. Their spirits appeared high. Passersby waved.

Koppert and Care were expected to reach the Batesburg-Leesville region, the march’s approximate midpoint, much later. It's an hourslong trudge, GPS apps show.

By noon Thursday, the two hope to arrive in Columbia and begin meeting with state lawmakers. Relocating the Vietnam War memorial is, apparently, no simple task – it requires more than a crew and a truck and some available land.

Rep. Wilson, others urge Biden to invest in nuke modernization and pit production

South Carolina’s knotty Heritage Act complicates the matter, as the decades-old measure shields war-tied monuments and roads, parks and other places by requiring a two-thirds vote by the Legislature to effect change. The key to moving the monument in Aiken, then, rests in Columbia. Koppert has said as much.

Aiken and Aiken County officials are on board with transplanting the monument. Aiken Mayor Rick Osbon on Wednesday said he is writing a letter of support; Aiken County Council Chairman Gary Bunker already has.

A bill introduced earlier this year by state Reps. Bill Taylor, Bill Clyburn, Bart Blackwell and Melissa Oremus would authorize the city and county to begin transferring the Vietnam War memorial to the Richland Avenue destination – a place of honor and accessibility, according to the Aiken County Veterans Council. State Sen. Tom Young on Wednesday applauded Koppert's advocacy and said the Aiken County Legislative Delegation “supports doing this now.” But, the senator cautioned, it's not exactly clear when the necessary votes will happen because of “pending Heritage Act litigation.”

“For us, it was one mission, and we need to make the Statehouse understand that. We’re one group,” Koppert said in a speech late last month. “It’s your monument, you’re asking for it to be moved, and they work for you. So it’s time for them to put up, shut up, or get out. That’s all I’ve got to say.”

Young in 2013 sponsored a bill that ultimately enabled a similar relocation of a World War I and World War II monument in North Augusta.

Klint Griffin, who helped recon the rural route the war-on-terror veterans are on, described Koppert as “very headstrong,” as someone who time and again executes. A battle, it seems, is brewing.

“He's focused,” Griffin continued, standing beside the support truck he was driving. “He does a lot for not just the veteran community, but the community in general.”

The Vietnam War memorial is not the only Aiken County display stuck in the Heritage Act orbit. Officials recently sought guidance on ownership of the Meriwether Monument, an obelisk in Calhoun Park honoring the sole white man, Thomas McKie Meriwether, to die in the race-related Hamburg Massacre.