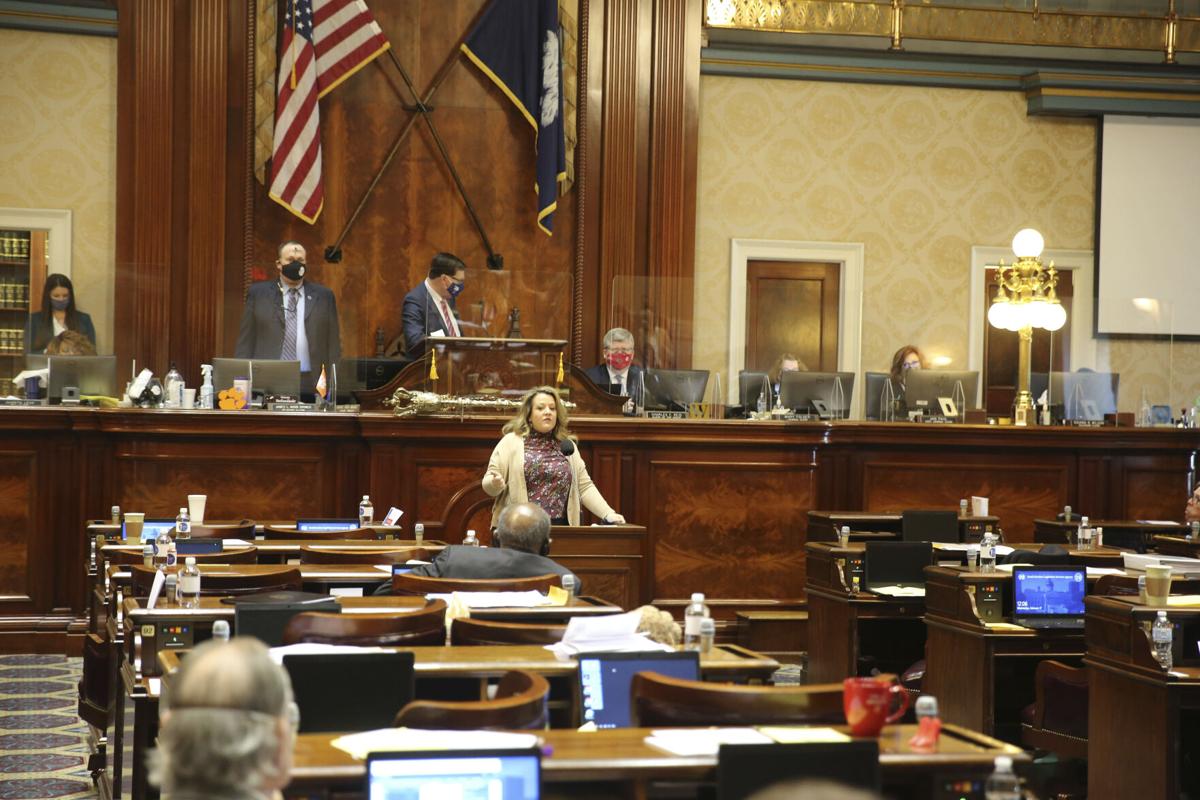 Rep. Melissa Lackey Oremus, R-Aiken, speaks in favor of an abortion bill as it is debated Feb. 17 in Columbia. Democrats walked out, leaving members to speak to many empty seats. (AP Photo/Jeffrey Collins) 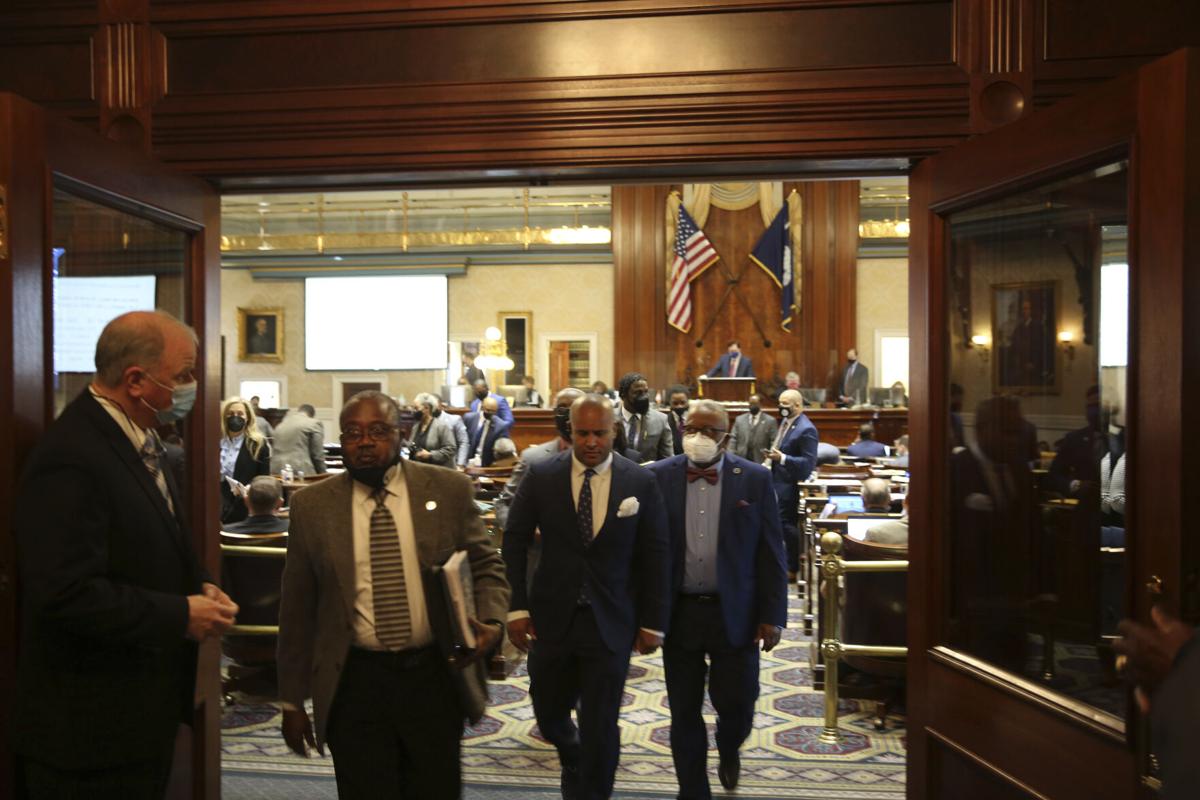 Black members of the South Carolina House walk out as an abortion bill is debated Feb. 17 in Columbia. (AP Photo/Jeffrey Collins) 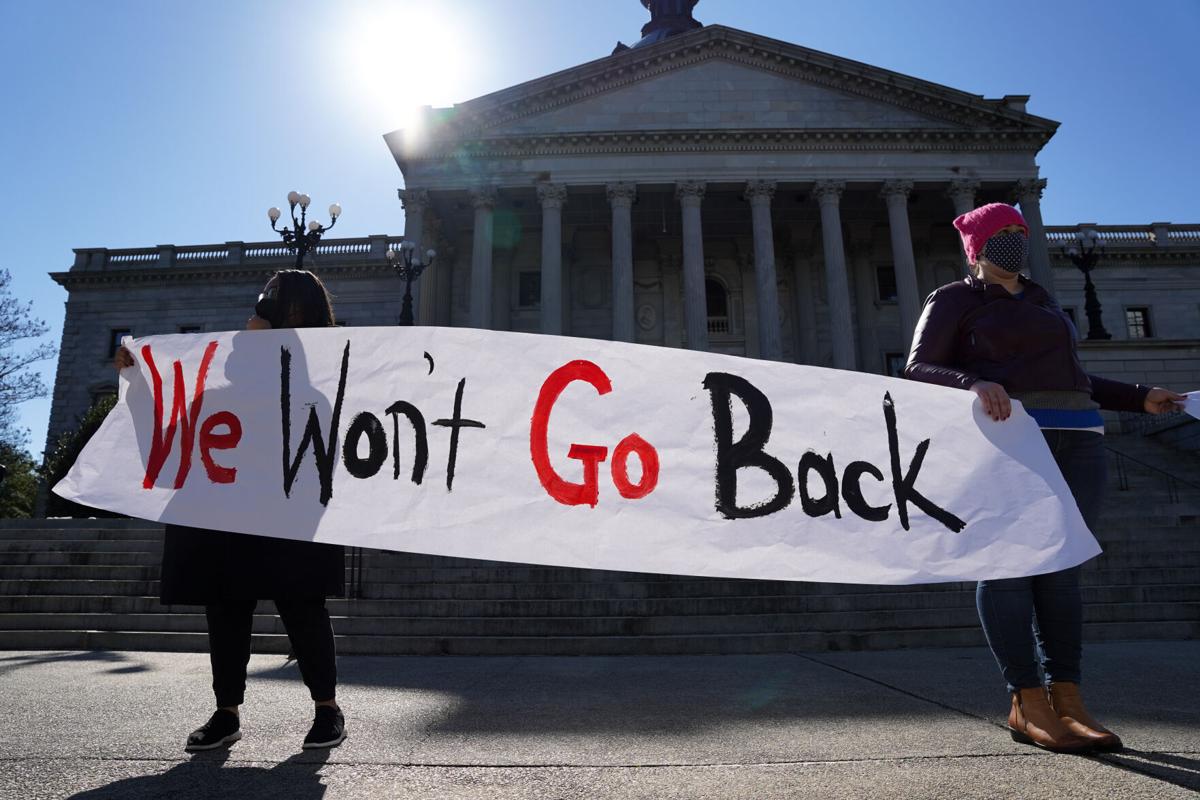 Demonstrators hold signs at the S.C. Statehouse during a protest against an abortion ban bill in Columbia, Feb. 17. (Sean Rayford/Special to The Post and Courier) 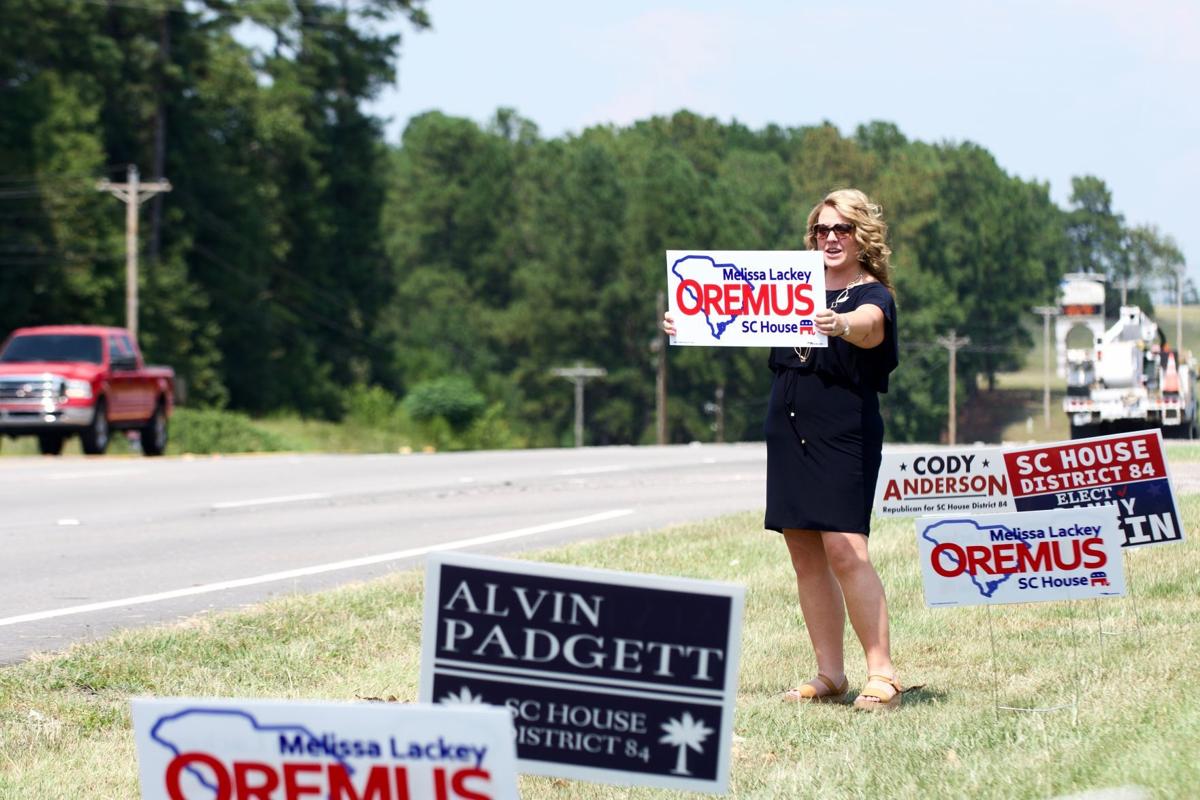 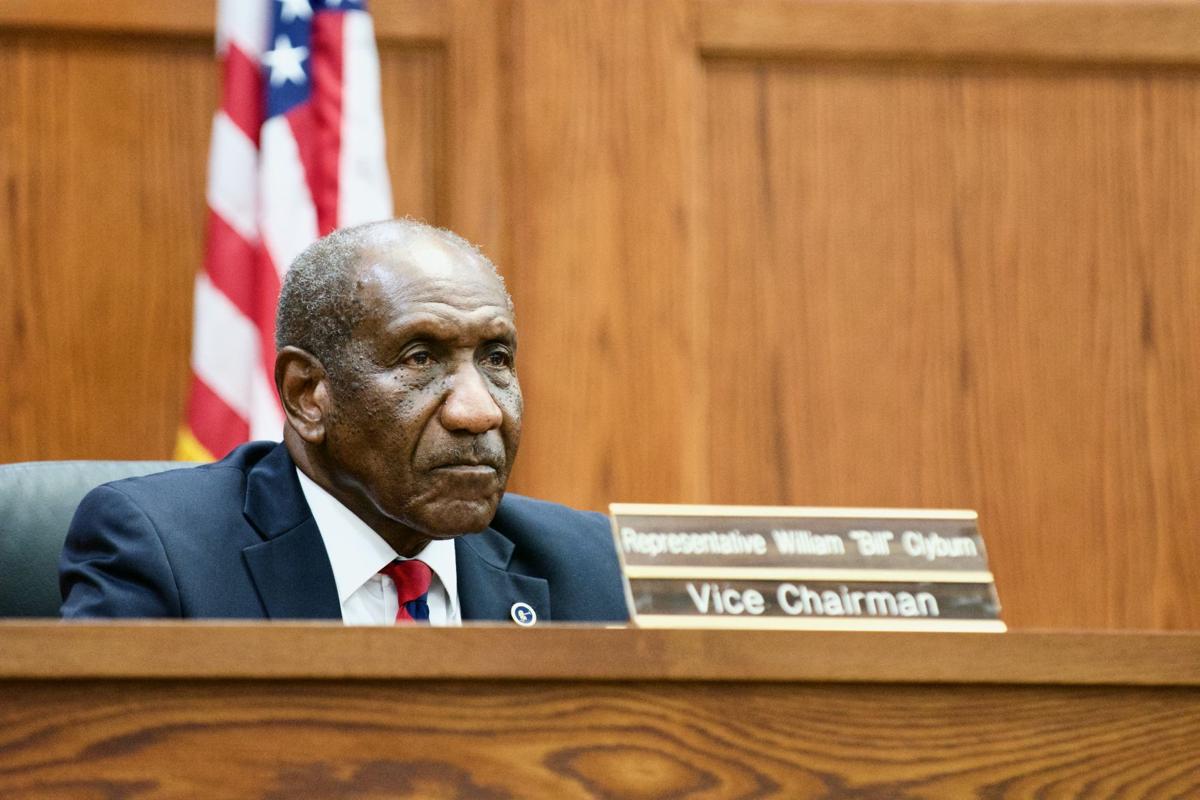 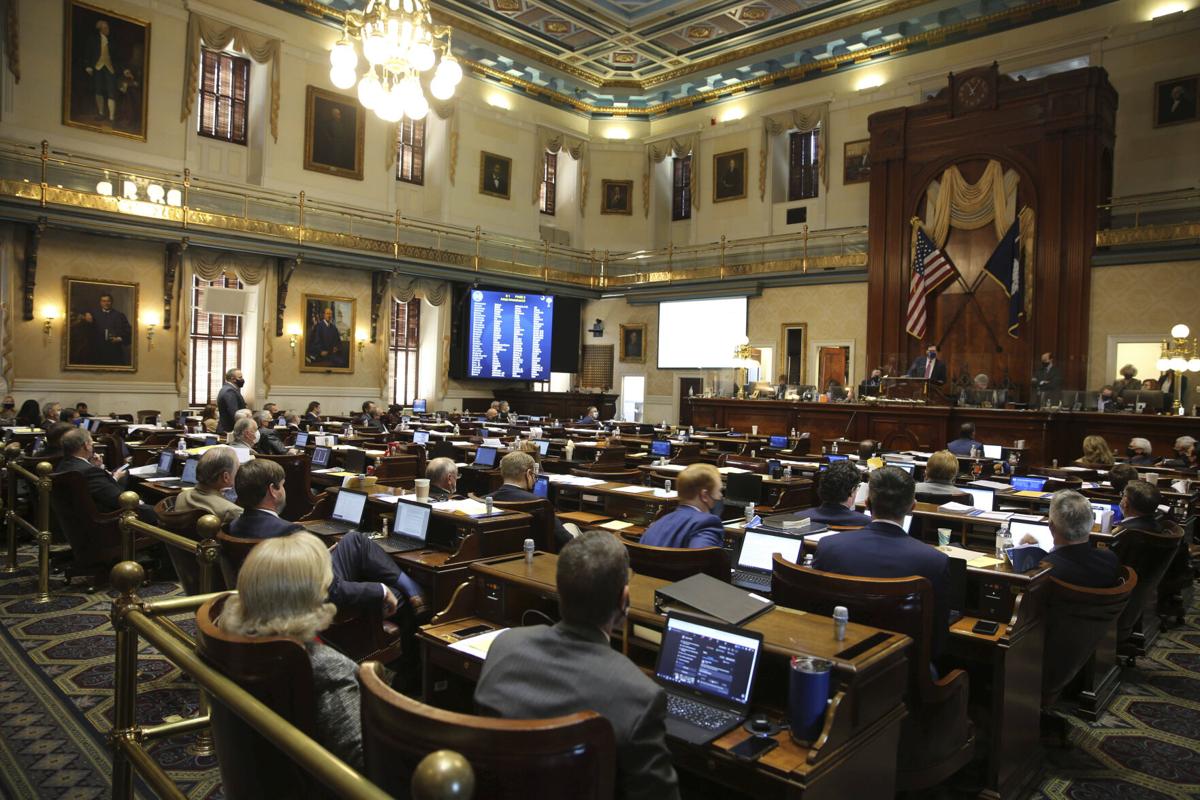 A number of empty seats are seen in the South Carolina House chamber on Wednesday, Feb. 17, in Columbia. Democrats walked out during the debate. (AP Photo/Jeffrey Collins) 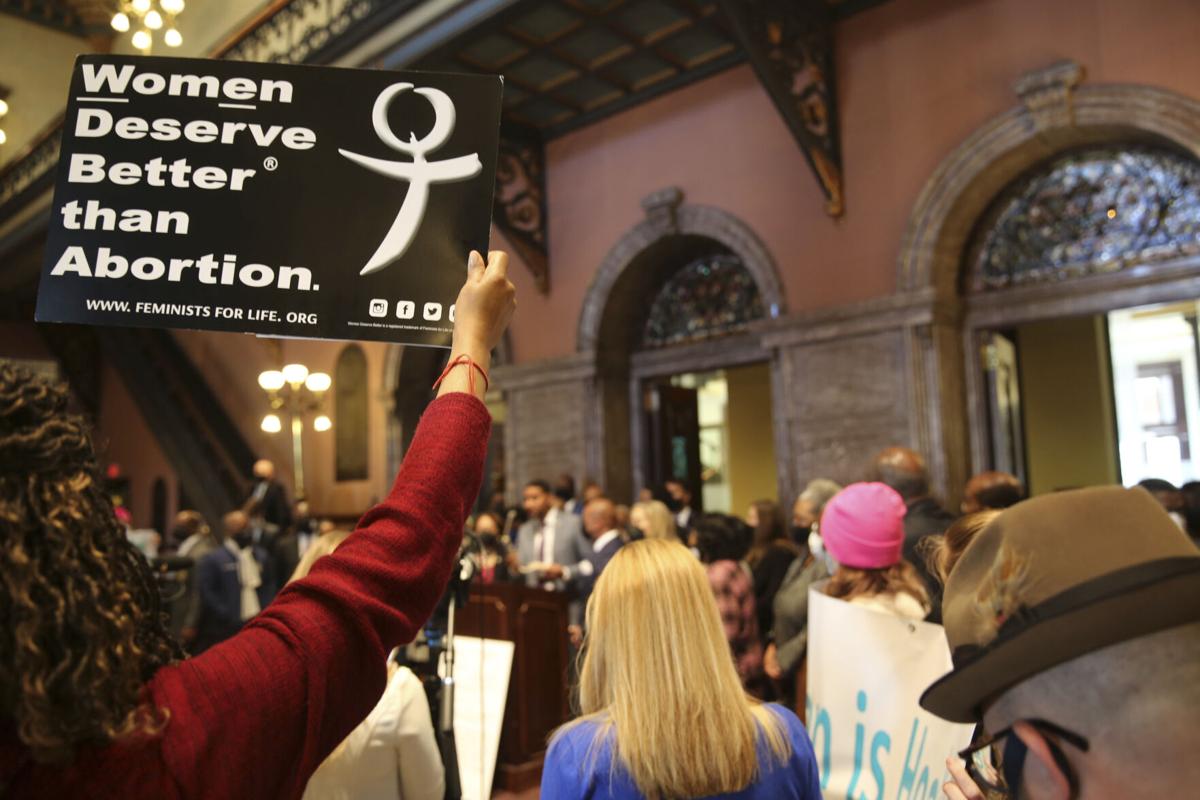 Rep. Justin Bamberg, D-Bamberg, speaks against an abortion bill at a news conference in the Statehouse on Wednesday, Feb. 17, in Columbia. Democrats walked out during the debate. (AP Photo/Jeffrey Collins)

Rep. Melissa Lackey Oremus, R-Aiken, speaks in favor of an abortion bill as it is debated Feb. 17 in Columbia. Democrats walked out, leaving members to speak to many empty seats. (AP Photo/Jeffrey Collins)

Black members of the South Carolina House walk out as an abortion bill is debated Feb. 17 in Columbia. (AP Photo/Jeffrey Collins)

Demonstrators hold signs at the S.C. Statehouse during a protest against an abortion ban bill in Columbia, Feb. 17. (Sean Rayford/Special to The Post and Courier)

A number of empty seats are seen in the South Carolina House chamber on Wednesday, Feb. 17, in Columbia. Democrats walked out during the debate. (AP Photo/Jeffrey Collins)

Rep. Justin Bamberg, D-Bamberg, speaks against an abortion bill at a news conference in the Statehouse on Wednesday, Feb. 17, in Columbia. Democrats walked out during the debate. (AP Photo/Jeffrey Collins)

Melissa Oremus was a teenager when she found herself pregnant. She was young, worried, ashamed. She hadn’t a clue who to consult or who to reach out to for help.

"I just know I was 16," Oremus said. "I was raised by a single mom, raising three kids on one income, and the last thing she needed was another mouth to feed."

It took her weeks to say something. And the people around her, she recounted, insisted she get an abortion. She resisted.

At an ultrasound appointment, Oremus "heard that little sound that you hear, that fast, 150 beat-a-minute little sound, a whipping noise. That sound to me was – proved to me – that I had a human being inside of me."

It was settled, then: "How could I have a choice, as you all call it a choice, to kill that sound, to make that go away?" she said. "My actions were my actions."

Fast forward some years. Oremus bests a clutch of other Republicans and wins a special election to represent S.C. House District 84, a region pinched between Aiken and North Augusta and stretching south toward the Savannah River Site and Jackson.

In 2021, she remains the only woman – and one of many conservatives – in the Aiken County Legislative Delegation. To repurpose her words, Oremus is a "House of Representatives member, just a poor girl from South Carolina who did it all with a baby in tow."

On Wednesday, standing on the House floor, Oremus relayed her story: the early months of her teenage pregnancy, the swirl of emotions, the struggle and her ability to succeed with the aid of prayer and those around her.

State Rep. Bill Taylor, a fellow Aiken Republican, on Thursday said what Oremus did – standing “not only in front of the House, but on television, livestreaming for everyone to see” – was courageous.

"She's very compelling in what she had to say," Taylor said.

Her remarks served a purpose – a pointy end of the spear. Lawmakers at the time were debating the S.C. Fetal Heartbeat Protection from Abortion Act, or heartbeat bill, for short, and were hurtling toward approval. As written, the measure bars most abortions once a heartbeat is detected, typically around six weeks and before a person might be aware of the pregnancy. Exemptions exist, namely in cases of rape and incest.

"I'm so tired of these celebrities saying, 'If I wouldn't have had an abortion, I couldn't have went on with my career.' What? What?" Oremus exclaimed Wednesday, addressing mostly her party colleagues, as Democrats had earlier stormed out in protest. "I'm here. I'm here. You can still have your life, it’s just going to be a little bit harder. So pull up your bootstraps and get ready for the war, because, listen, life is hard. You don't get a manual."

The House ultimately approved the bill, sending it to the desk of an eager Gov. Henry McMaster. (The Senate approved it prior, transmitting it to the House.) The Republican governor signed the bill Thursday, effectively banning most abortions in the state, and delivering on a long-running promise.

"I asked the citizens and I asked the General Assembly to send me a bill, send me the heartbeat bill, and I would sign it," McMaster said at an afternoon signing ceremony. "And you have. And now I will."

"I was so proud of that moment [Thursday]," she said, adding, "It sends such a message."

The law, though, will end up entangled in legal challenges and Supreme Court precedent; the right to an abortion has been repeatedly affirmed. In states where similar clampdowns have proceeded, like nearby Georgia, they’ve been dragged to court.

"These bills have not had any luck so far," said Dr. Sarah Young, an assistant professor of political science at USC Aiken, "and, of course, we already have groups that are contesting this."

Planned Parenthood South Atlantic and the Greenville Women’s Clinic announced their intent to sue Thursday. A federal judge on Friday granted a temporary restraining order, for now blocking the abortion ban and teeing up a longer battle.

"Even after voters elected pro-sexual and reproductive health majorities in both chambers of Congress and the presidency," said Alexis McGill Johnson with Planned Parenthood Federation of America, "state legislatures across the country are doubling down on their attempts to systematically block access to abortion."

S.C. Attorney General Alan Wilson has promised his office would "vigorously defend this law" in court.

"Every generation has a right and a duty to revisit issues as important as this one," Wilson said in a statement. "The heartbeat law protects life. Nothing is more important or fundamental."

‘One of the reddest spots’: GOP candidates make their case at Aiken virtual rally

In a Fox News segment early Friday morning, Oremus suggested she wanted the matter handled by the high court: "I'd say we're going to leave it to the Supreme Court and God, of course, and pray that it gets overturned. It's about time."

Former President Donald Trump's three momentous appointments to the Supreme Court – Neil Gorsuch in 2017, Brett Kavanaugh in 2018, and Amy Coney Barrett in 2020 – cemented a conservative majority on the bench. Some supporters of abortion restrictions hope such a tilt will cast a different light on landmark cases, like Roe v. Wade or the later Planned Parenthood v. Casey. Asked in 2018 if he would ask Supreme Court nominees how they would vote on Roe v. Wade, Trump said, "Well that's a big one, and probably not. They're all saying don't do that, you don't do that, you shouldn't do that. But I'm putting conservative people on."

Senate Majority Leader Shane Massey, R-Edgefield, in a statement Wednesday described the state's burgeoning abortion prohibition as a major win, and one that can withstand court scrutiny.

"Once signed into law, the heartbeat bill will save thousands of pre-born lives in South Carolina," Massey said, "and send a clear message that innocent life is respected in our state."

Thousands of abortions, data show, were performed in the Palmetto State in 2018 and 2019. Nationwide, nearly 620,000 abortions were reported to the Centers for Disease Control and Prevention for 2018. Abortions are safe medical procedures, research has shown, and complications are rare. Critics of the heartbeat bill have warned of a chilling effect, as providers could face punishment.

All but two members of the eight-member Aiken County Legislative Delegation supported the heartbeat bill as it cruised along in Columbia. In a state as red as South Carolina, said Young with USCA, "this is a very emotional issue for the Republican base."

Clyburn on Thursday emphasized that he is pro-life, "there's no question about that." His issue with the measure, he explained, stems from a dislike of domineering government. The decision to have an abortion, he added, should rest between a woman, her partner and her doctor.

"In cases that have come prior, where states have attempted these kinds of bans, there’s been some real punitive behavior that’s been directed at women," Young said. "It sometimes ignores the very real health issues that are at play with this."