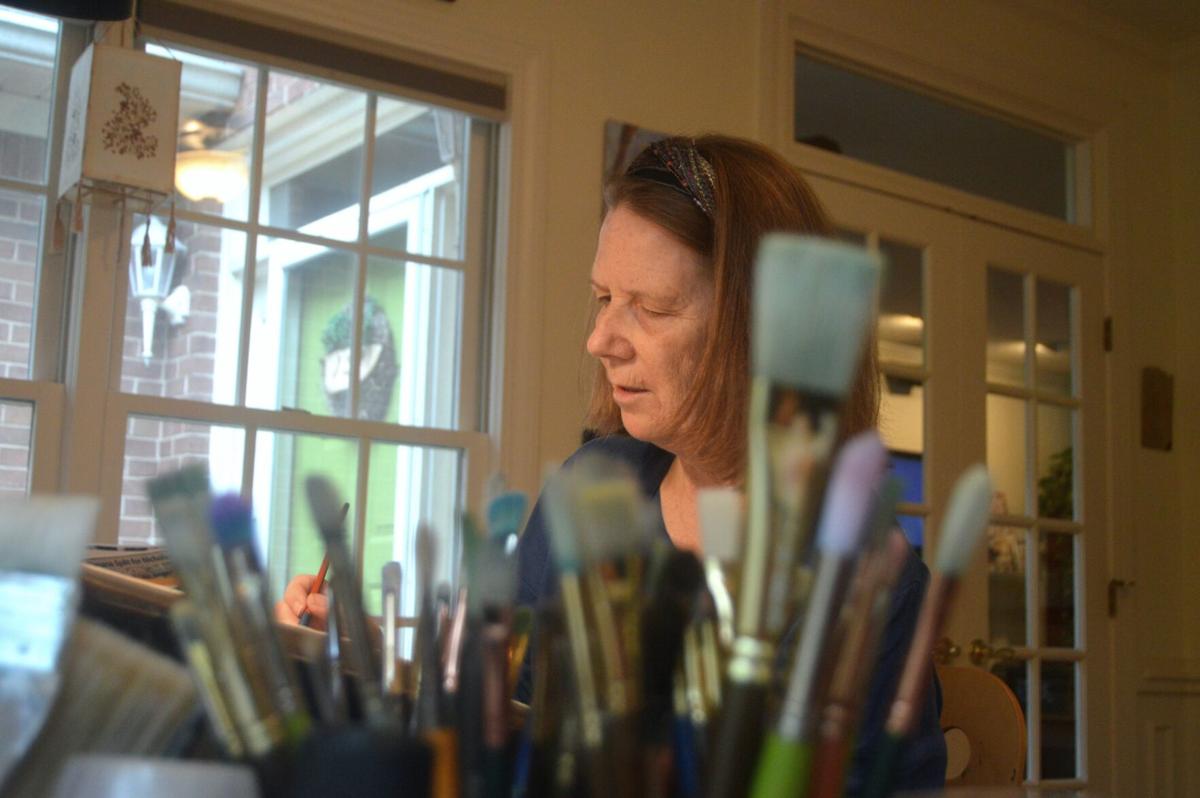 Amy Ness works on a series of illustrations for a commission project. Working from home has a whole new meaning for artists. 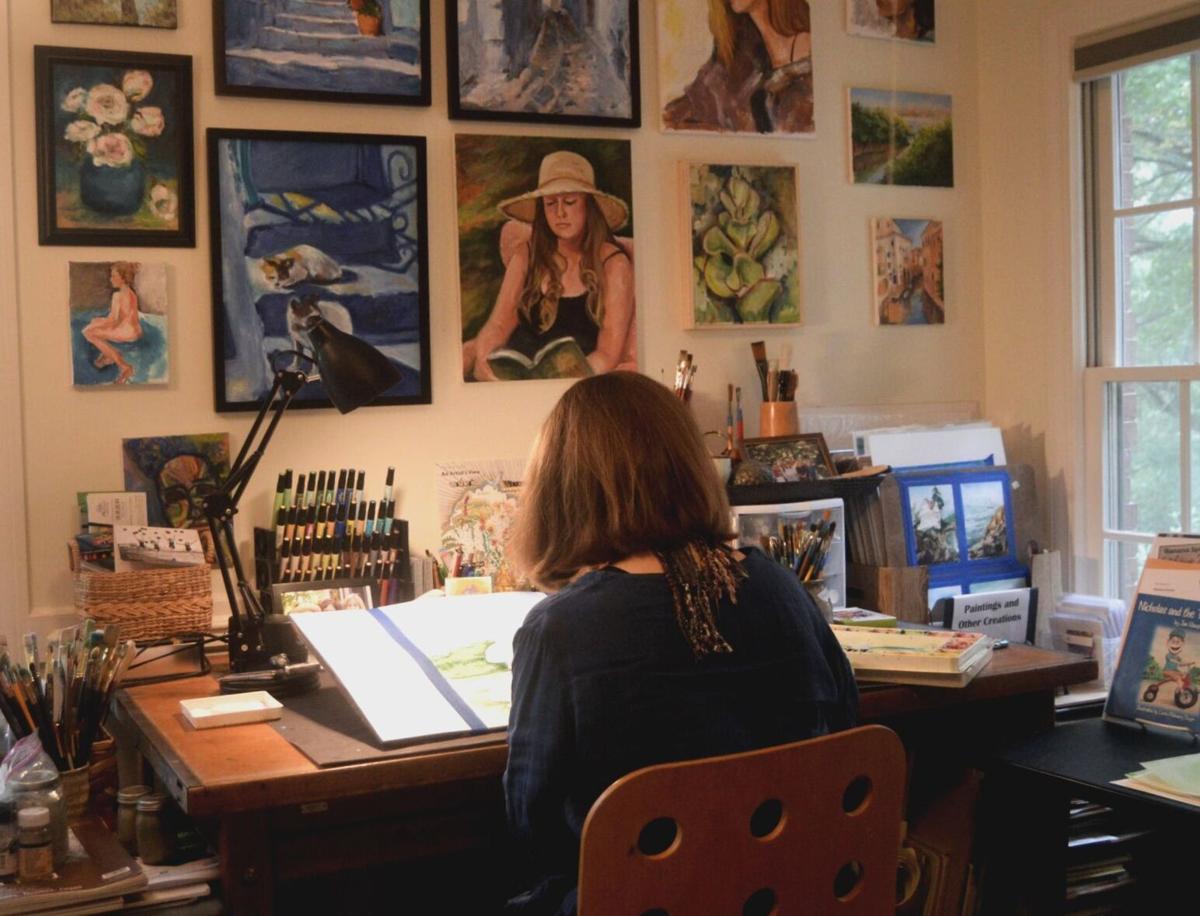 Amy Ness works on an illustration project in her home in Aiken. The painter is striving to continue working during the pandemic, though the current atmosphere has stalled her creative process to create "lively" portraits.

Amy Ness works on a series of illustrations for a commission project. Working from home has a whole new meaning for artists.

Amy Ness works on an illustration project in her home in Aiken. The painter is striving to continue working during the pandemic, though the current atmosphere has stalled her creative process to create "lively" portraits.

As theaters, stages and even an art class or two cautiously begin to reopen, a shadow still lurks over the creative minds of members of Aiken's arts community.

Many artists have had to practice their craft in more constrictive environments since the coronavirus pandemic began, taking away some of the interpersonal constructiveness they need to thrive in their work and, in some cases, altering the way they create altogether.

The pandemic overall has created both negative and positive effects on performers and their work, suggests Paul Crook, the executive director of USC Aiken's Etherredge Center.

"From Broadway to high school drama club, people just can't practice their craft," Crook said. "For people where (performing) is their job or career, it's affecting them ..."

However, Crook also notes that artists have had the chance to more thoughtfully work on their art and can use online platforms to stay in touch with their fellow artists, even if such communications severely contrast from most artists' preferred setups.

"(The pandemic) has spurred people to get even more creative," Crook said. "You see people figuring out ways to do online performances and virtual plays or readings ... people are really trying to engage in their art more."

Art on any level requires some level of social interaction, whether it's asking a model posing for a sculpture to change positions or asking another artist for feedback on one's work.

For Aiken painter Amy Ness, the loss of that contact with her fellow artists and the rest of the outside world took its toll on her art – and on her heart.

In the earlier days of the pandemic, after she and her circle of painters had to leave their art class due to safety concerns, Ness retreated to a guest room-turned-studio to paint.

However, the anxiety taking place in the world reached her as well and began to severely affect her creative process.

The subject of some of her earlier pieces featured "faceless, masked" figures, and even a self-portrait that showcased the tiredness and fear she felt from ongoing isolation.

Nearly six months later, a new self-portrait sits on her easel, one that is still in its early stage and has the potential to showcase any number of emotions she feels after half a year.

"It's just staring at me, but I can't get back to it yet," she said. "I can't go back to making happy, quaint little paintings. I know that they're there, but I'm not ready (to create them), there's too many people suffering."

As the world cautiously reopens, Ness is finding the inspiration to return to the art class she was attending earlier this year, and has even started teaching one of her own.

However, there's a new absence she feels around her fellow artists now, one that's disturbingly different from the carefreeness she once felt.

"Even (with masks), we don't feel comfortable or relaxed so much," Ness said. "For me, it feels like I still don't want to let my guard down, and it's coming true in my art. I have to really spend some time loosening up before anything comes out."

Through it all, Ness still tries to find brighter angles to focus on and still counts herself lucky that she lives in a place where the coronavirus and political turmoil has remained calm compared to other areas.

Recently, Ness made an arrangement to create a series of 17 different illustrations for Aiken children's book author Jan Waugh, a project that has offered a bit of light on her dark creative streak.

Artists involved in the movie and theater industry particularly have taken a hard hit this year. Actors, animators and writers alike have lost their jobs or have had to significantly alter the way they continue with current and future projects.

Independent Augusta filmmaker Christopher Forbes, who has used several Aiken hotspots in a handful of his films, said the pandemic has slowed down production for many of his ongoing projects due to the number of areas he and his crew were able to use.

Forbes recently wrapped up production for his Western drama "Once Upon a Time in Tombstone," a film shot mostly in South Carolina and Georgia.

He had plans to film many of the outside scenes in New Mexico to get an "authentic desert feel" to the film but had to stick closer to home when the pandemic tightened travel restrictions around the world.

"With all that was going on, we said no, and made do with what we had here," Forbes said.

As someone who has personally lost acquaintances to the pandemic, Forbes said he recognizes the severity the virus poses on himself and his crew members, and plans for such.

"I wore a mask the most because I was the one behind the camera ... it wasn't required for everyone else because they could space out where we were," Forbes said. "They'd wear them as needed ... these people (are) committed to doing whatever they have to (in order to) safely to get this done."

Distributing his films will remain the same, Forbes said, as the majority of his films are direct digital releases; however, theatrical releases – a rare treat for Forbes – are still up in the air.

"There were a few (films) we talked about sending to theaters on a limited run, but we're going to back off on that because theaters are having a really hard time," he said.

Forbes currently has plans to have a showing of his film "Hampton's Legion" at the Aiken County Historical Museum after its completion, but such plans will depend on the state of the pandemic in the next several months, he said. The film is currently in post production.

All the world's a stage ... of inconveniences

When spring break came around for USC Aiken students, the coronavirus was still barely a blip  on Aiken's radar.

However, when the semester was finally cut short due to rising coronavirus cases throughout the state, students like Andrew Randolph quickly picked up their laptops to attempt to continue their education online, something the junior fine arts major found increasingly challenging.

He and several classmates were rehearsing a skit for a class when the pandemic hit, and they instantly attempted to continue online.

"Of course, it's much more difficult trying to act when you're looking at someone through a computer screen and not in an actual theater," Randolph said.

Randolph is a theater writer who plans to own his own theater company one day, a future he is still striving  for even if masks have to be worn during rehearsals.

With classes reopening for the fall, rehearsals can be held in person as long as everyone dons masks. The long summer did little to stifle Randolph's creativity, though it made him more thankful not only for the social interactions in his life but on stage as well.

"Theater requires more people than, I think, any other art form," Randolph said. "When you're disengaged from that, it's a lot harder to be creative mentally, spiritually or emotionally. It's so much harder to (be creative) when you're sitting at home and nobody's there to help encourage you."

The pandemic is still far from over, Randolph notes, but finding little joys throughout the day has helped him stay positive and to continue writing and creating.

"(Find) a new song, or read a new script or book, or anything really that's stimulating," Randolph said. "Just keep trying to create ... keep thinking. You really don't know what you can come up with."