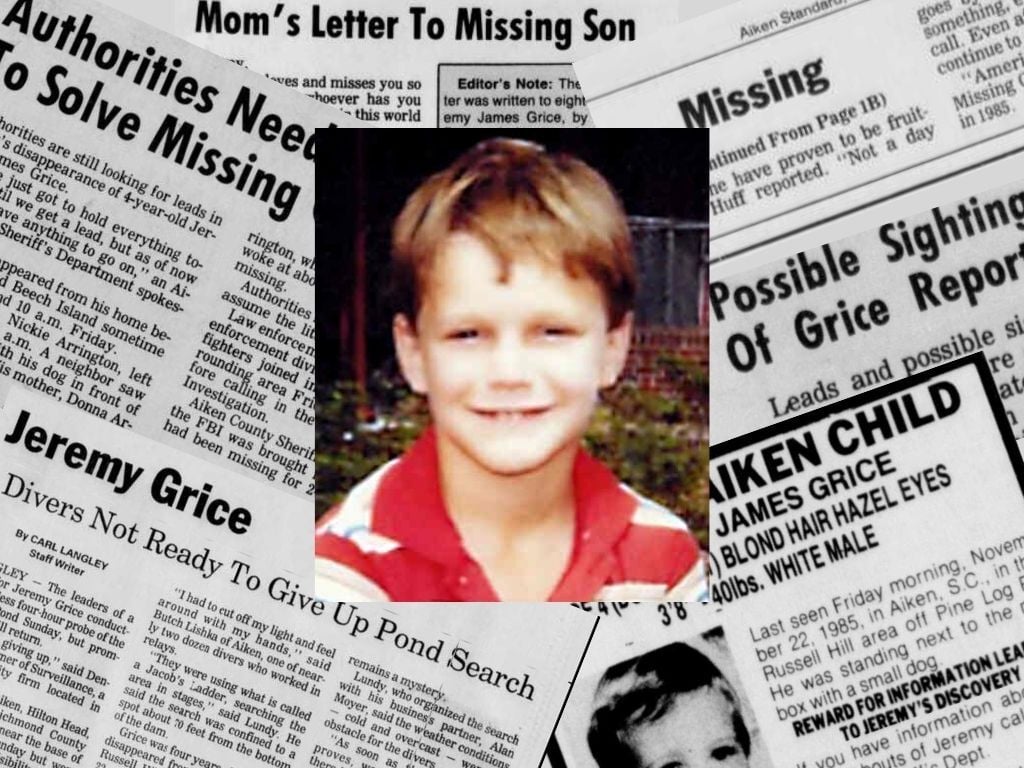 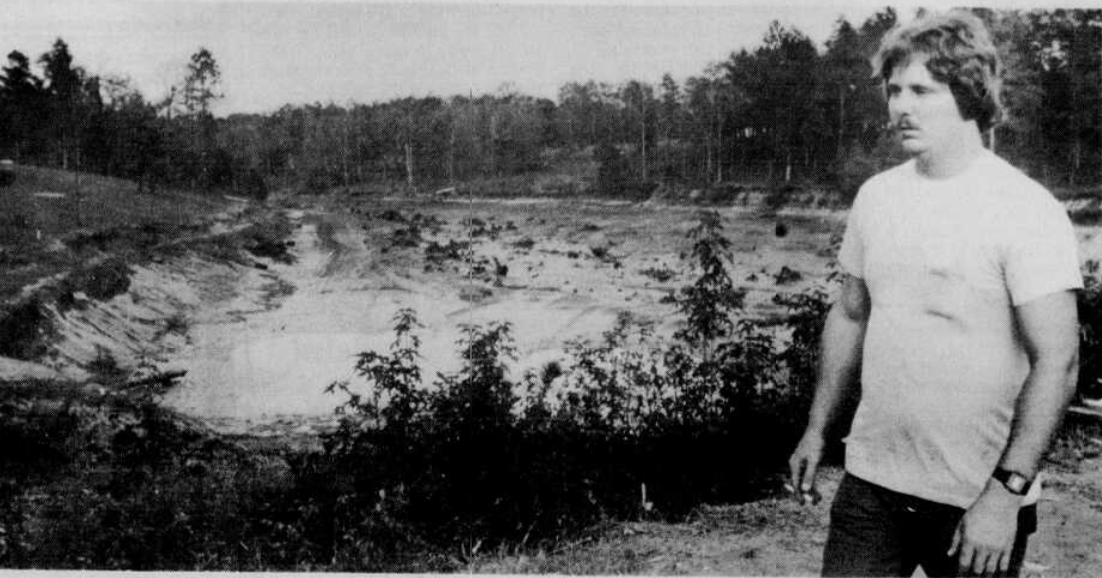 Ray Grice, the father of missing Jeremy Grice, walks past the larger of two ponds that were drained in a search for his missing son. 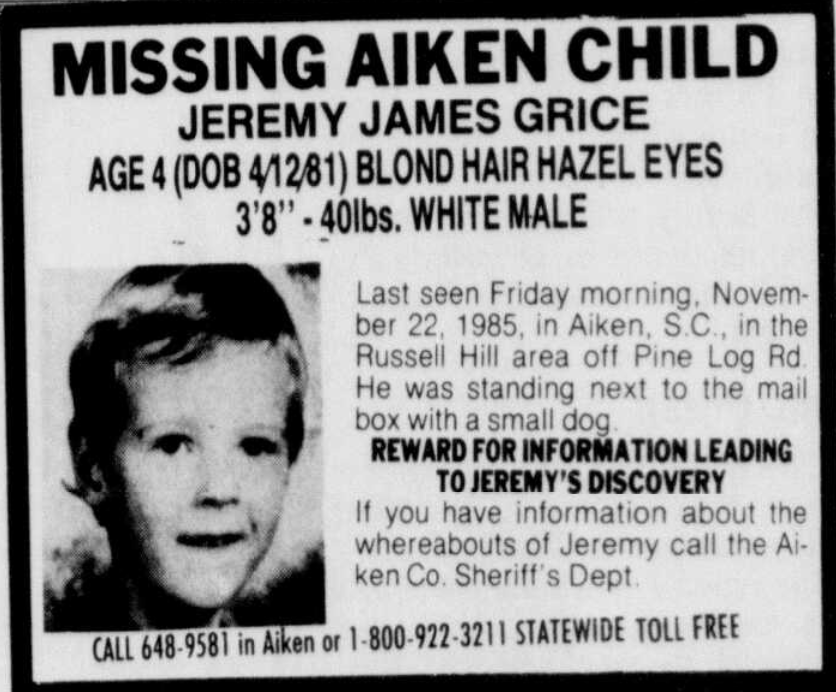 An ad in an archived Aiken Standard newspaper shows details of Jeremy's case. 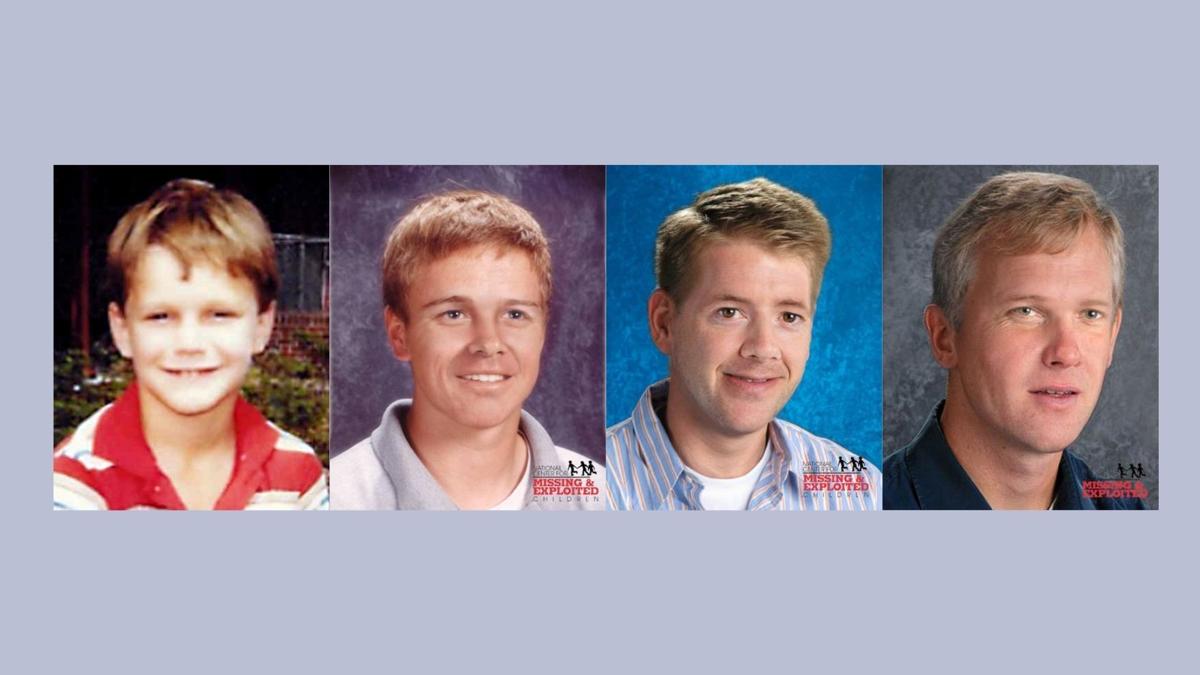 The National Center for Missing and Exploited Children released digitally aged progressed photos of Jeremy as his case continued to remain unsolved. The last photo shows what Jeremy could have possibly looked like at 34-years-old. 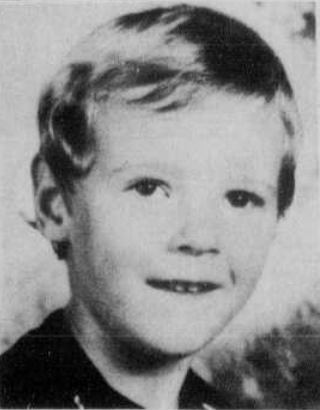 Jeremy Grice was described as being 4 feet tall and weighing 40 pounds at the time of his disappearance in 1985. He had blonde hair and hazel eyes.

Searchers head home after failing to find Jeremy in the area around his home a day after he was reporting missing.

An ad in an archived Aiken Standard newspaper shows details of Jeremy's case.

The National Center for Missing and Exploited Children released digitally aged progressed photos of Jeremy as his case continued to remain unsolved. The last photo shows what Jeremy could have possibly looked like at 34-years-old.

Jeremy Grice was described as being 4 feet tall and weighing 40 pounds at the time of his disappearance in 1985. He had blonde hair and hazel eyes.

A 35-year-old question remains unanswered: Where is Jeremy Grice?

The question has echoed around Aiken County after Jeremy, a 4-year-old, was reported missing on Nov. 22, 1985.

This May would have been his 39th birthday.

“This investigation has and continues to have an impact on the Aiken County community, to where people who were in Aiken County the day that Jeremy went missing can tell you what they were doing at the time of his disappearance,” said Capt. Eric Abdullah with the Aiken County Sheriff’s Office.

Cold winds and heavy rain beat down that morning as panic struck in a small, quiet neighborhood when Jeremy was reported missing.

He lived in a trailer with his mother and stepfather, Donna and Nickie Arrington, along with his 7-month-old sister in the Russell Hills development located between Bath and Beech Island, just off Pine Log Road.

Jeremy’s mother came home at approximately 1 a.m. after working a late shift at her job, according to previous articles in the Aiken Standard. Her husband had tucked Jeremy into bed the night before.

She went to sleep but woke up around 7 a.m. to make coffee for her husband as he got ready for work.

On her way back to bed, she stopped by Jeremy's room to check on him as he slept. Past articles state that she didn't actually see Jeremy but saw the covers on his bed rumpled in a heap. Jeremy had a habit of burrowing under the covers when he slept, so she thought nothing of it.

She was later awakened at 10 a.m. by the cries of Jeremy's 7-month-old sister. After tending to her daughter, Donna realized Jeremy was not in the home.

She began to frantically search in and around the trailer, but there was no sign of Jeremy. She called the Aiken County Sheriff's Office, and deputies arrived on scene within the hour.

Sheriff Carrol G. Heath called in all off-duty personnel to respond to the scene for a thorough search of the area. However, there was still no sign of Jeremy.

A next-door neighbor, possibly the last person to see Jeremy, said she saw the 4-year-old outside of his family’s trailer playing with his dog by the mailbox at approximately 8:45 a.m., according to previous reports.

Jeremy’s mother told police that it was “odd” that Jeremy would have been outside because of the severe inclement weather, an incident report by the sheriff’s office states. She pointed out to officers Jeremy left his favorite jacket and shoes in his room. Also, the dog he was reportedly seen playing with was known to always stay by his side. The dog was still home, but Jeremy was not.

The severity of the situation began to grow. The sheriff’s office responded by organizing a large search throughout an approximately 3-mile radius around Jeremy’s home.

Men and women from the S.C. Law Enforcement Division, the S.C. Wildlife and Marine Resources Department, and the Aiken County Sheriff’s Office combed through the woods and fields surrounding the Russell Hills area in hopes of finding Jeremy. Volunteer firefighters and Aiken County community members joined in making the search’s participants number over 100 people, according to past reports.

Officers canvassed the neighborhood and followed up on any possible leads. Family members were questioned several times, and many were polygraphed with negative results, an incident report by the sheriff’s office states.

Two ponds less than half a mile from Jeremy’s home were drained as fears arose that the boy may have accidentally drowned.

Among the group of searchers was former Aiken Standard reporter Fran Chapman Smith, who said she responded to the area when the newsroom heard about the search over the police scanner. From that day on, she would continue to follow Jeremy’s case throughout her reporting career.

“There were a lot of cases over the years, but this one captured everyone’s attention and everyone’s hearts,” Smith recalled. “As a mother now, I can’t even fathom waking up and your 4-year-old child not being there.”

Smith said searchers held out hope for days, trekking through muddy, drained ponds and checking every area in the surrounding woods in hopes of finding any trace of Jeremy.

A helicopter flew overhead searching for Jeremy from above.

Among those searching on the ground was Jeremy’s biological father, Ray Grice, who reportedly would spend all hours of the night calling out for Jeremy.

“I walked most of these woods hollering for him myself,” Ray Grice said in a Nov. 27, 1985, Aiken Standard article. “Just anybody who hollered for him and he didn’t know them, he wouldn’t answer. He was shy.”

After nearly three days of fruitless searching, the sheriff’s office announced they believed Jeremy was kidnapped.

A fear swept over the Russell Hills neighborhood and the Aiken County area. It’s a fear that neighbors Tony and Lynn Prosser said they still haven’t forgotten.

The two have lived in the Russell Hills neighborhood since 1980. They were next-door neighbors of Jeremy’s family and would often see him playing in his front yard. He was just about the same age as their own son.

“I was so messed up because my kid played in the front yard, too, at the time,” Tony Prosser said. “From that day forward until mine got older, he played in the back.”

The Prossers still live in the same home and say most of the people who lived in the area have either moved or passed away. Jeremy’s trailer is no longer in the neighborhood. They haven't heard from the Arringtons in years but they say Jeremy's case still comes to mind often.

“Many times we would be sitting down to eat and, while we would say the blessing, my boy would say, ‘I hope whoever has Jeremy is being good to him, Mama,’” Lynn Prosser said. “It was just a sad and scary time. It made you pick up your own and hold them closer.”

Throughout the years the Aiken County Sheriff’s Office has received tips and possible sightings of Jeremy. However, each one has turned out to be a dead end.

Fliers were printed and passed around. Reward money was offered for any information leading to Jeremy being found.

“The challenge to this case is that this case has been under investigation since the 1980s,” Abdullah said. “The assigned investigators were not employed with this agency when this case was initiated and are having to work off of case notes from the original investigation and pick up where the investigator left off.”

The sheriff’s office confirmed that until Jeremy’s case is solved, it will continue to be an ongoing investigation. The department still keeps a DNA file on Jeremy’s case to assist in the investigation, and his case is still listed on the National Center for Missing and Exploited Children's website.

Abdullah encourages anyone with any information that could assist in Jeremy’s case to contact the sheriff’s office at 803-648-6811.

“Anytime a child goes missing, it has a great and lasting impact on a community; but, as long as someone cares, there is always hope,” Abdullah said. “We hope that someday, the final answers will come not for us, but for Jeremy and his family.”