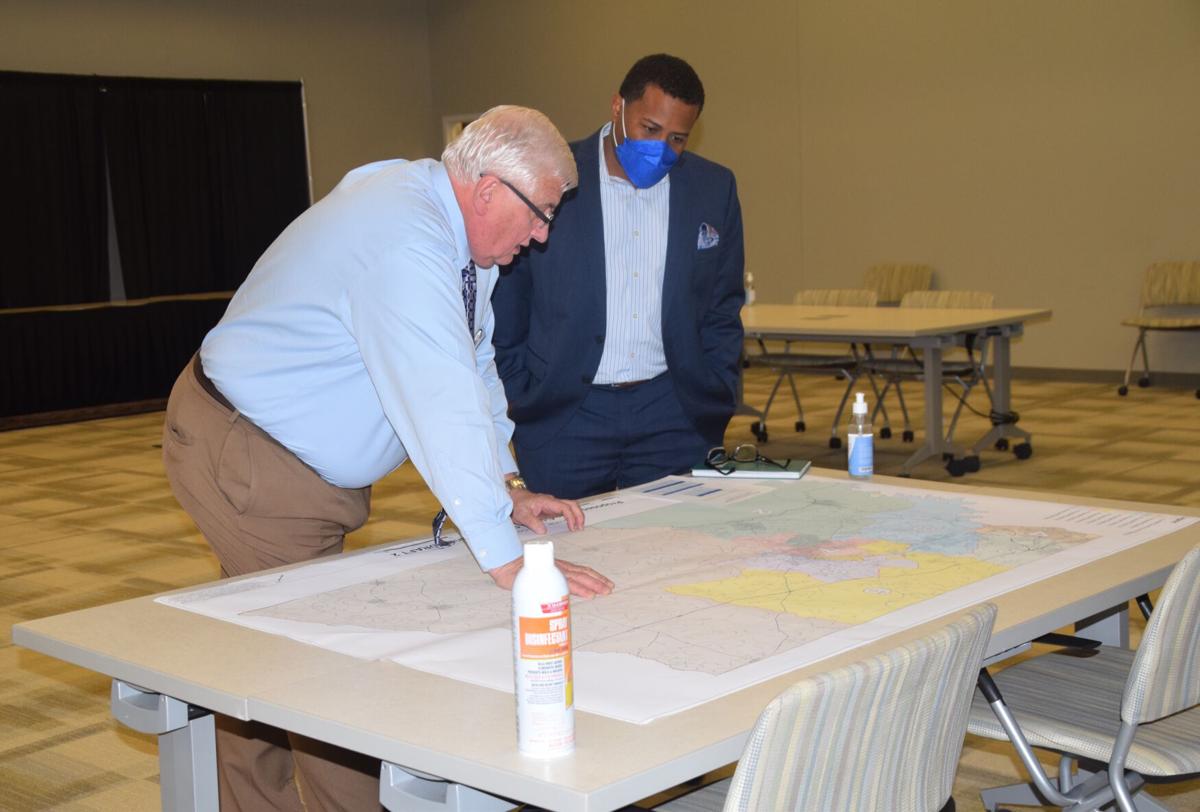 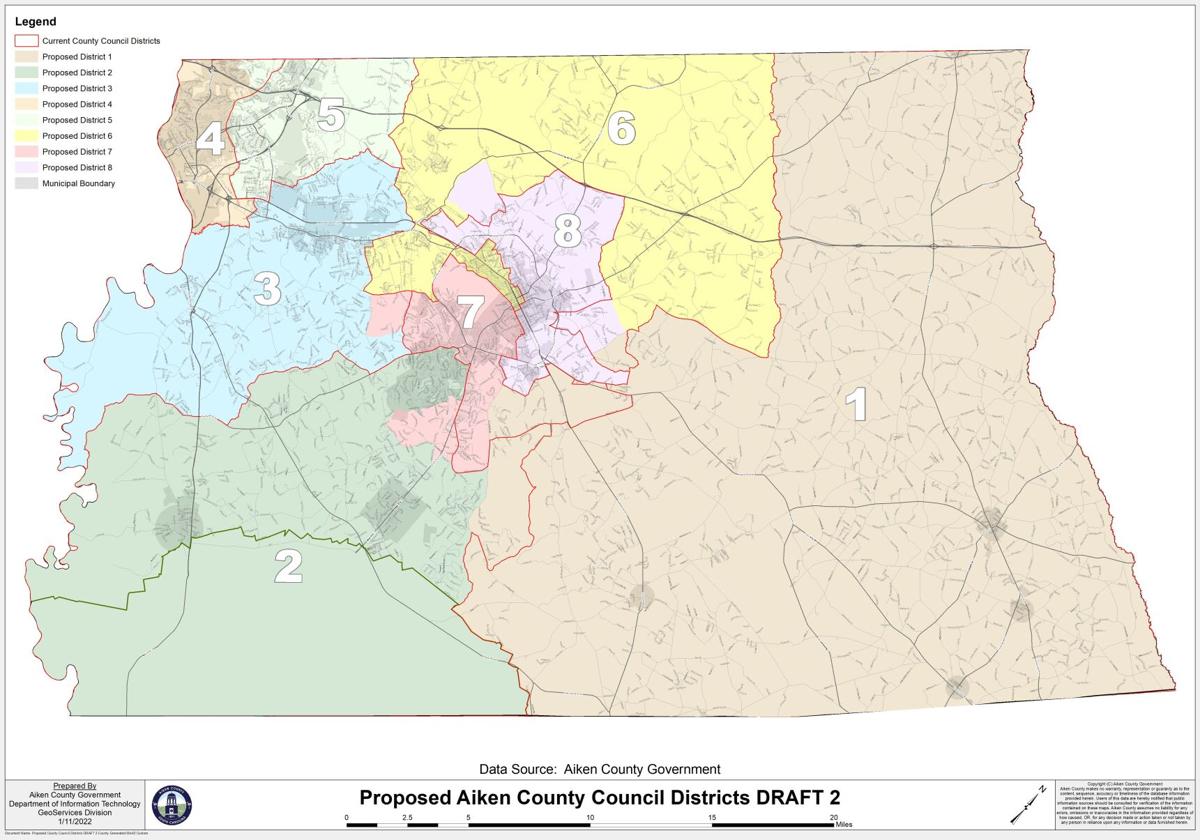 This map shows proposed changes to the eight Aiken County Council districts. The red lines are the current boundaries for the districts 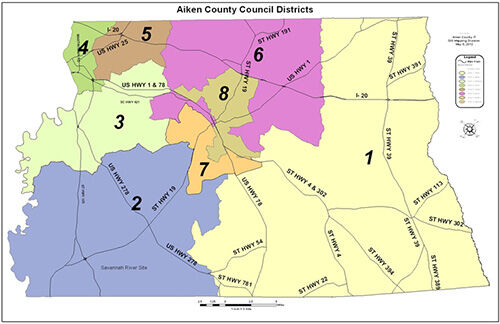 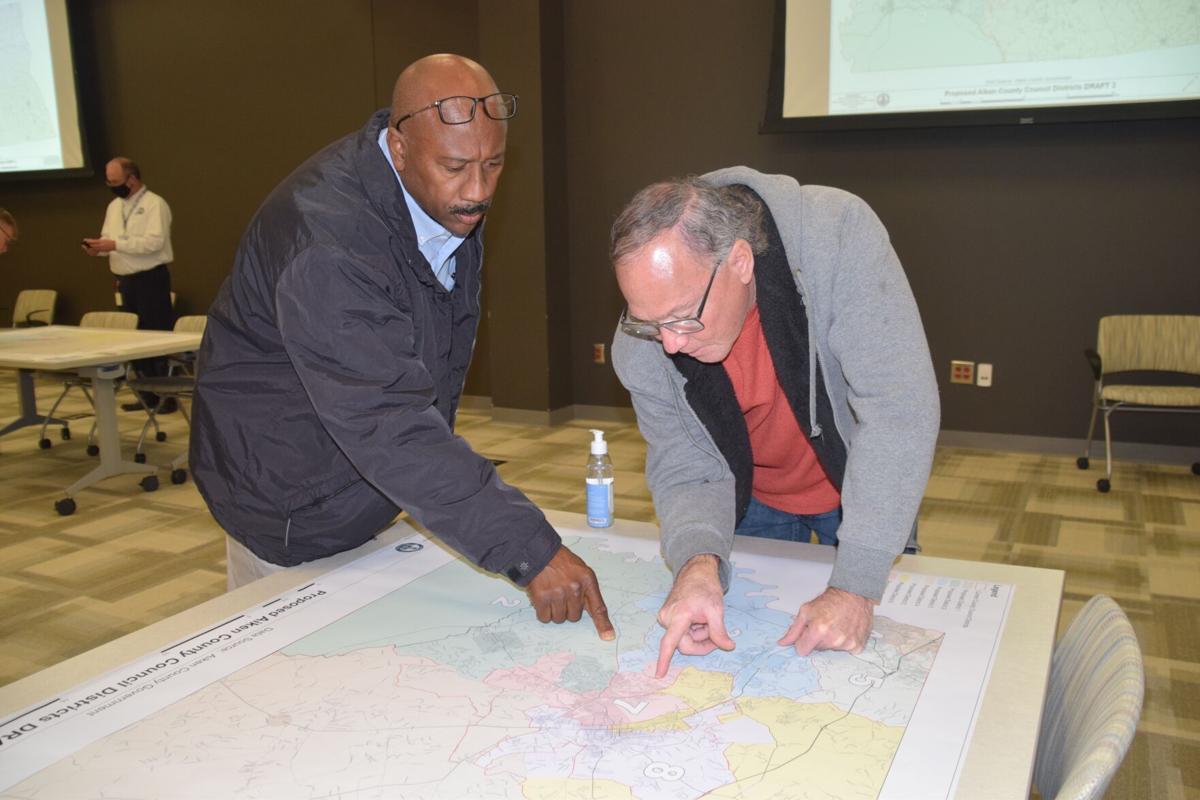 This map shows proposed changes to the eight Aiken County Council districts. The red lines are the current boundaries for the districts

Aiken County Council Chairman Gary Bunker attended the public information session, and he provided an overview of the alterations.

“I would call them (the changes) relatively minor,” Bunker said. “Obviously, some people are going to wake up one day and see that they’re in a different district. But Council really wanted to try to minimize the amount of disruption.”

The goal is to make the districts roughly equal in terms of their number of residents, based on the 2020 U.S. census.

There were population changes from the census in 2010 that made the adjustments necessary.

“The other thing you can see (on the proposed map) is that the districts are generally drifting to the west,” Bunker said. “That really reflects the fact that population growth in the county is really in the southwestern quadrant.”

The South Carolina Revenue and Fiscal Affairs Office is assisting County Council and county staff with the redistricting process.

There are constitutional and statutory provisions that need to be considered.

In December 2020, County Council approved the first reading of the redistricting ordinance. The second reading is scheduled for Jan. 18.

A public hearing and the ordinance’s third reading are set for Feb. 1.

That timetable, however, could change.

Also at the information session was Eugene White, president of the Aiken County Branch of the NAACP. The NAACP did its own redistricting analysis and “submitted a draft proposal (to the county) about how the districts should look before Christmas,” White said. “We’ll go back now and do some further evaluation. We like to see ourselves as a partner in this process as we protect the vote in our democracy and in our county.”

Under the proposed redistricting plan, District 8, represented by Willar H. Hightower Jr., remains a majority-minority district. In such a district, “a racial minority group or groups comprise a majority of the district's total population,” according to ballotpedia.com.

“I’m just here as a resident,” he said. “I used to work close to this sort of process. I used to be the executive director of voter registration and elections (for the county), and I find this stuff interesting.”

North Augusta resident Mike Cercy said he was at the information session because he was “just curious about what is changing and how it is going to affect the North Augusta area, which has seen a lot of growth.

“I also just wanted to understand what was happening in the rest of the county,” Cercy added.

To submit comments or questions about redistricting and/or the proposed redistricting map, send an email to councilredist@aikencountysc.gov or mail them to the Aiken County Council Office, 1930 University Parkway, Aiken, S.C. 29801.