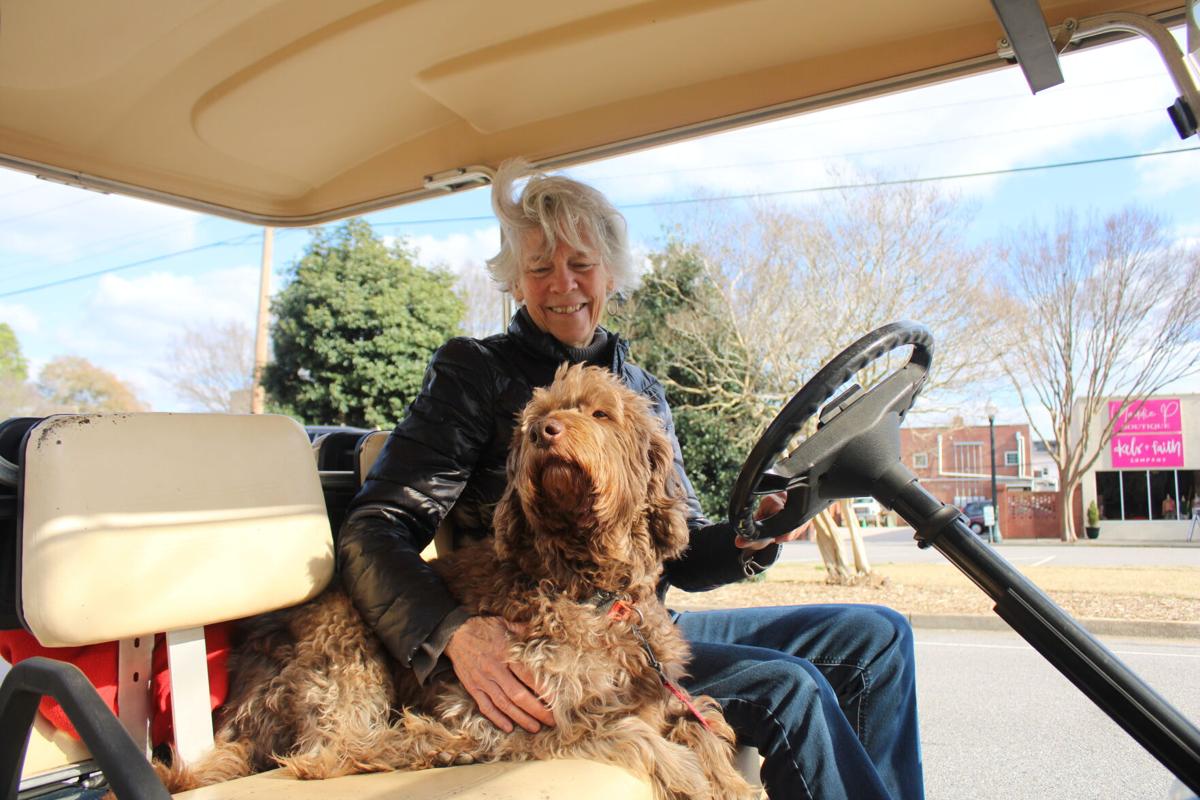 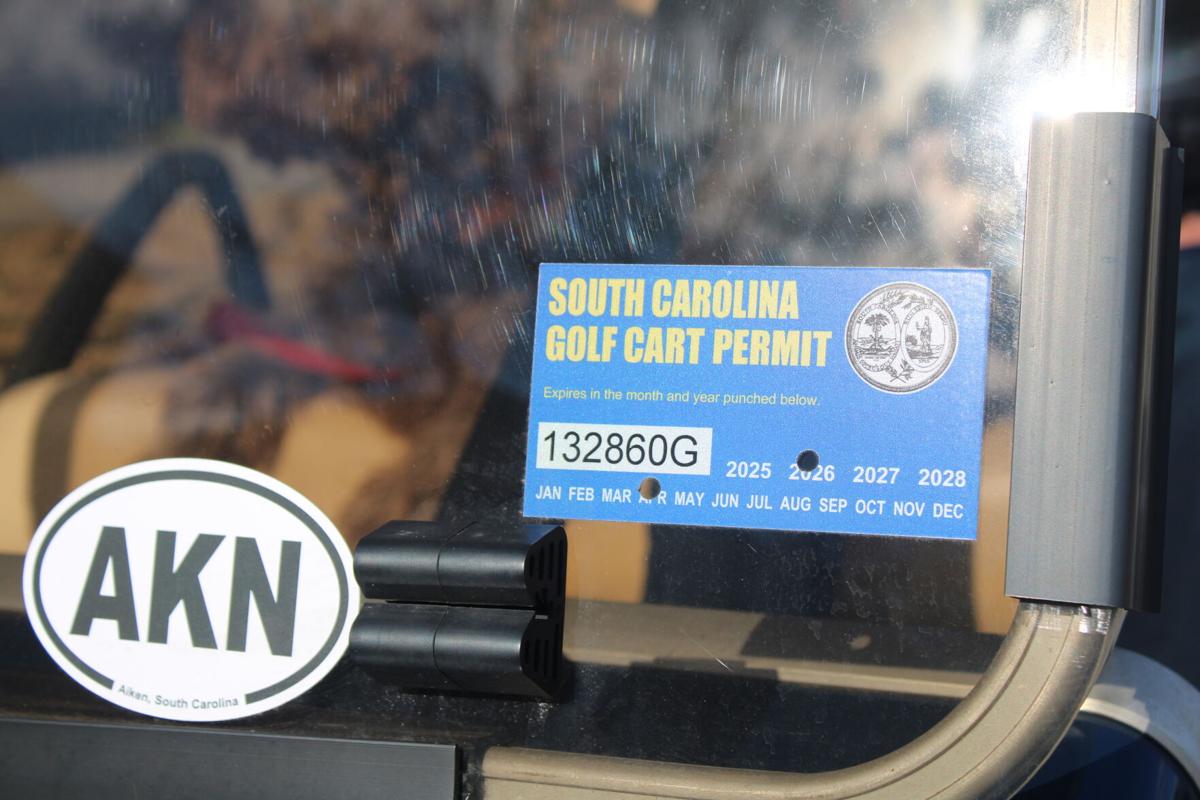 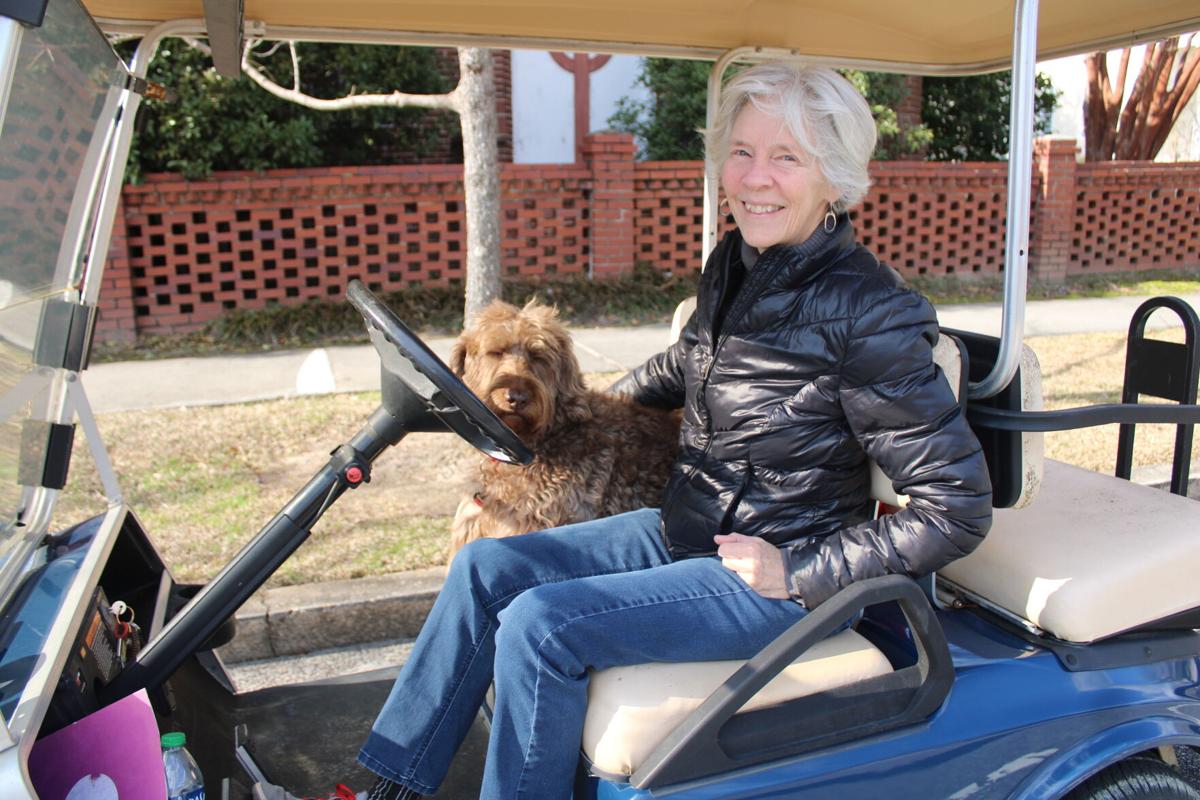 Jane Keisler and her dog Anne Lamontt riding around in a golf cart in downtown Aiken. (Staff/Bianca Moorman) 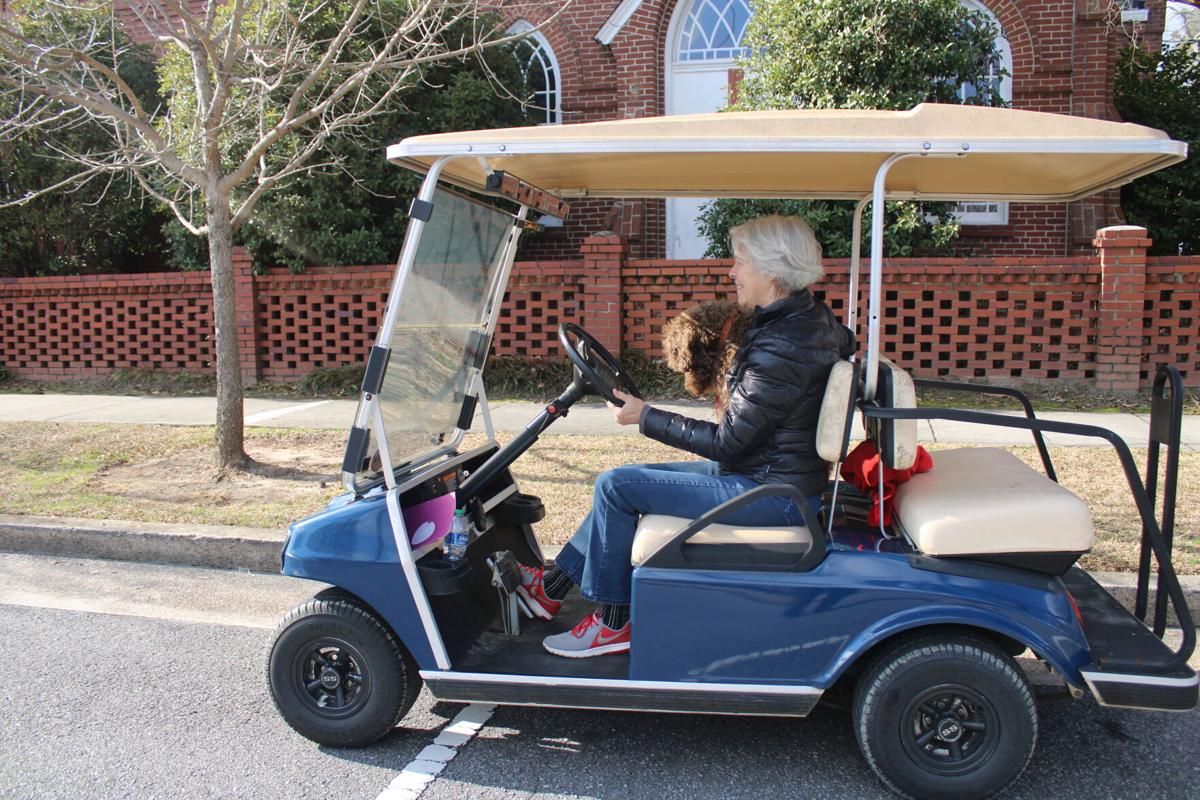 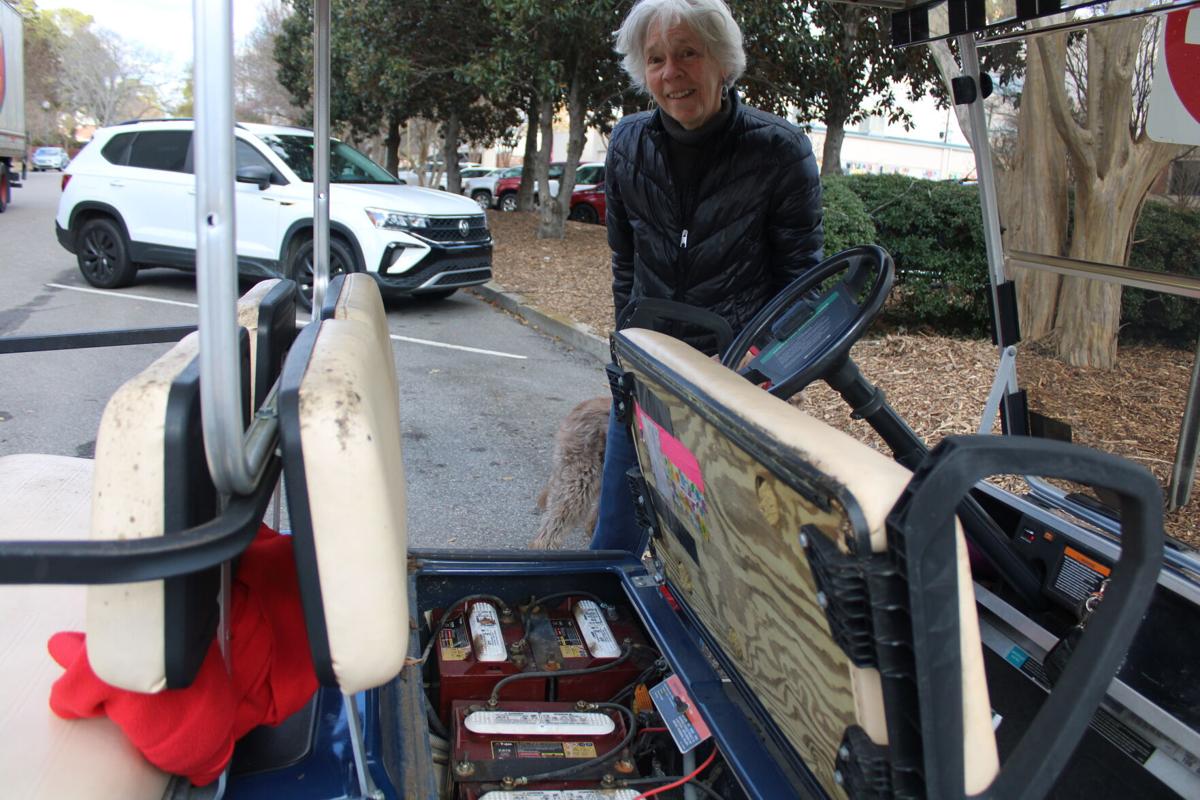 Jane Keisler and her dog Anne Lamontt riding around in a golf cart in downtown Aiken. (Staff/Bianca Moorman)

With her dog Anne Lamott in her golf cart, Jane Keisler of Aiken is having a good time.

Even if it's a short drive into downtown Aiken, Keisler enjoys taking a ride in her golf cart to get there.

“I use it for the convenience and for the joy and fun of it,” Keisler said.

Keisler is not alone.

Many people and families in Aiken drive golf carts in downtown and in neighborhoods to get around.

If it is a quick trip to the grocery store, bank, post office, church or coming back from a game of golf, people enjoy a drive in a golf cart.

“The dog thinks it's her cart,” Keisler said.

According to a Global Market Insights report in 2022, 62% of golf carts were driven on golf courses, while 38% were driven in commercial spaces and other public places for travel and leisure.

“It’s a great mode of transportation,” Keisler said. "It's been a wonderful experience to me."

Golf carts are powered by gas or electricity.

Keisler said the price is worth it because golf carts last a long time.

With proper maintenance, a golf cart has a life span of 30 to 40 years, according to online data.

Additionally, golf carts are limited to roads with a posted speed limit of 35 mph or less, during daylight hours and the driver must be 16 years old with a valid driver’s license.

Drivers also need a permit to drive golf carts within the city limits of Aiken.

Most of the complaints have been for golf carts spotted on Highway 1 (York Street), Highway 19 (Laurens Street) and Powderhouse, Whiskey and Silver Bluff roads.

Those roads are main roads and state highways, so golf carts are not allowed.

“They just think if they can ride them at 35 mph, which is part of the law as well as they can ride it (golf cart) anywhere they want, but that is not the case,” she said.

The mix of residential and commercial businesses could be a reason why families are driving golf carts more frequently, Hayes said.

Hayes said the only thing law enforcement wants people to do is follow the state golf cart laws.

“Basically, the complaints are people driving on roadways they are not supposed to, underage drivers on the roadway and unsafe driving, '' she said.

But Keisler said she follows the golf cart rules and drives her golf cart on South Boundary, a designated road.

“I use it for the convenience and for the joy and fun of it,” Keisler said.

Keisler owns an electric golf cart, and she takes  it to church, the bank, the post office and the grocery store.

She said the golf cart allows her to travel short distances without putting miles on her car.

Aiken's Michelle Orr purchased her gas golf cart in the summer 2018 and hasn't looked back. Orr lives in the Westcliff neighborhood and, when the weather is nice, sees many families drive their carts around the neighborhood or to the community pool.

"We use it as an alternative mode of transportation and we kind of take it to our friend's house who live in the neighborhood when the weather is nice, "she said.

Orr said some days she takes her son to the golf course .

"Me and my younger daughter will hop in the cart and follow him as he plays golf," Orr said.

Orr said following the golf cart rules are important, so getting a permit and insurance were a top priority because she wasn't sure where golf carts could be driven in Aiken.

Orr said when her kids were younger, she would drive her kids in the golf cart to relax them.

She said the holidays are fun because people decorate the golf carts.

"It is pretty cute, it is almost like a caravan of golf carts on Halloween and it is pretty fun," Orr said.

Curtis Holt, store manager of Ronnie’s Hitches and Trailers, sells golf carts and has seen an increase over the last two years.

“Golf carts have gained a lot of popularity right now since COVID hit, as a lot of people have been wanting to ride around in their neighborhood," Holt said.

Holt said most of the store’s customers are homeowners with children looking for something to do in the afternoon.

Most people are buying them now just to keep them at home, he said.

As more homes are being developed near the Bettis Academy, Holt said he has seen people take their children to school on a golf cart.

“They jump on the golf cart and run the kids to school,” he said.

Holt also said people on farms have also been buying golf carts to ride around on because it is more convenient than driving a four-wheeler . He said people are also buying them as gifts.

“If you have nothing to do on a Saturday, jump on a cart and just ride, cruise through the neighborhood, hang out with your friends and meet your neighbors,” he said.

Holt said the extra seating provides room for people to bring their friends along.

With more people wanting to be outside, Holt said he expects the purchase of golf carts to increase.

“It’s something that has grown in popularity,” he said.

Keisler and Orr are thankful they live in a community that allows them to drive golf carts.

"I do feel like Aiken is a golf cart-friendly community," Orr said.