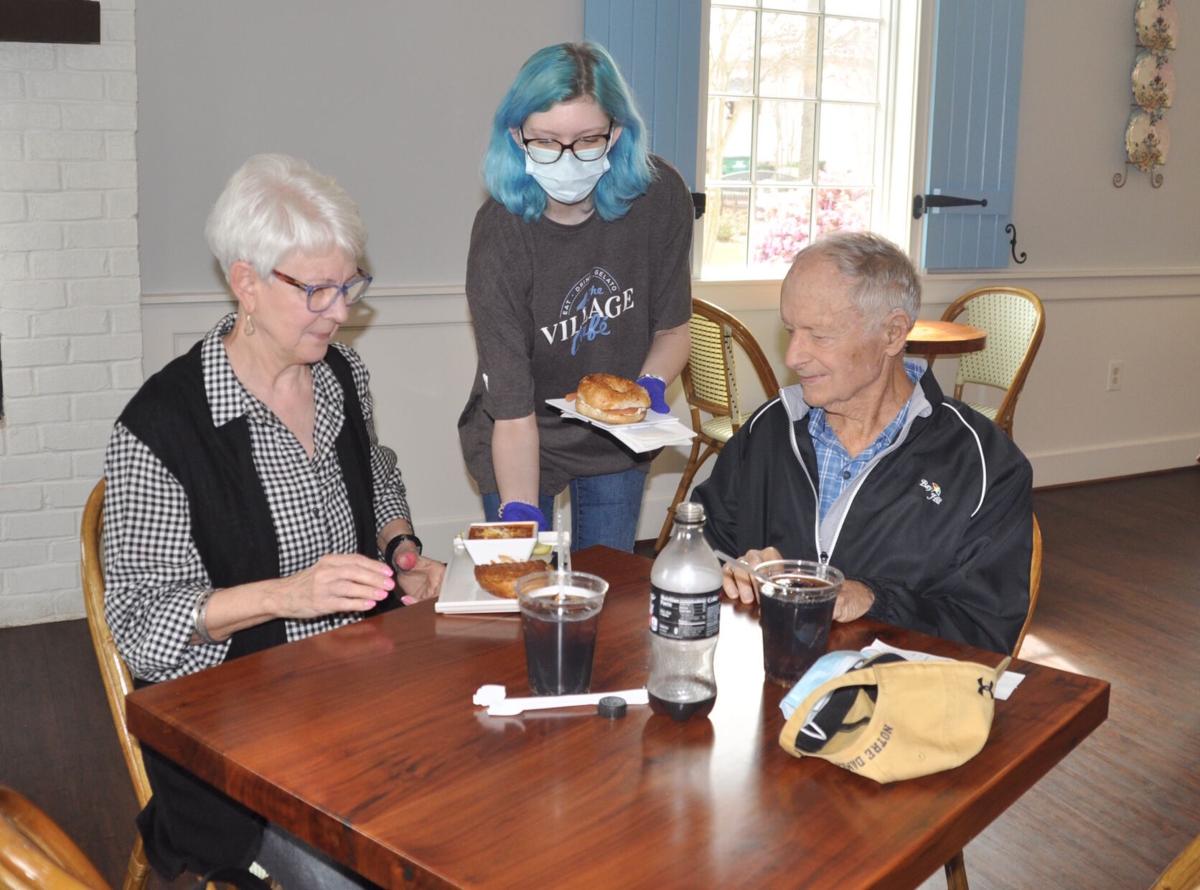 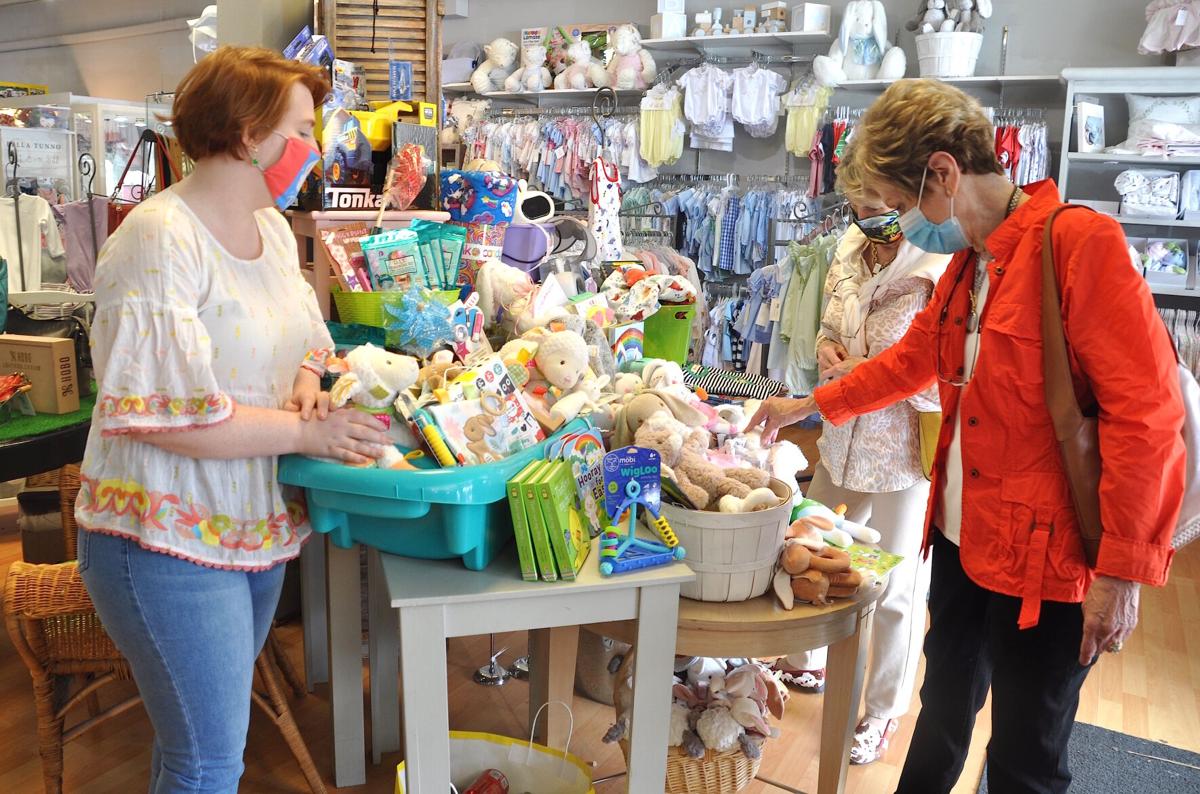 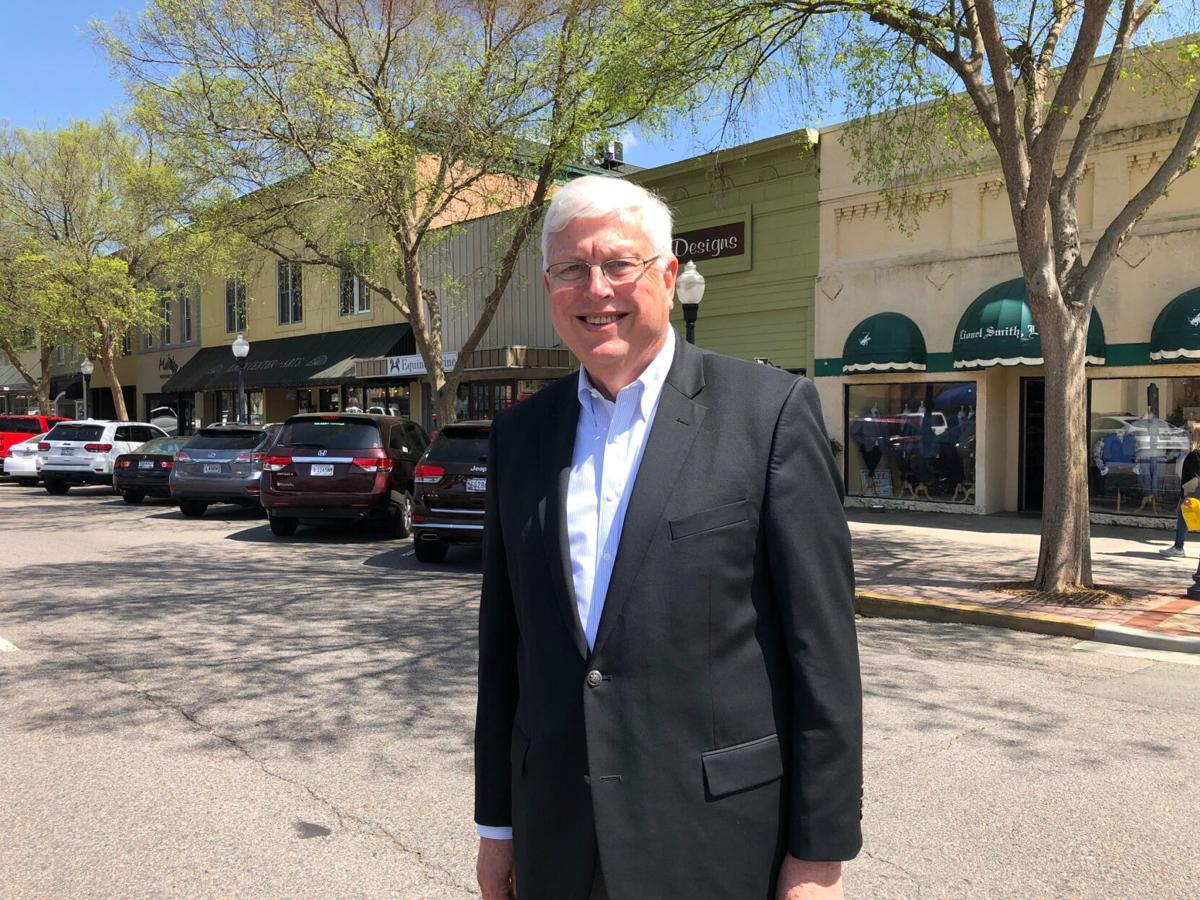 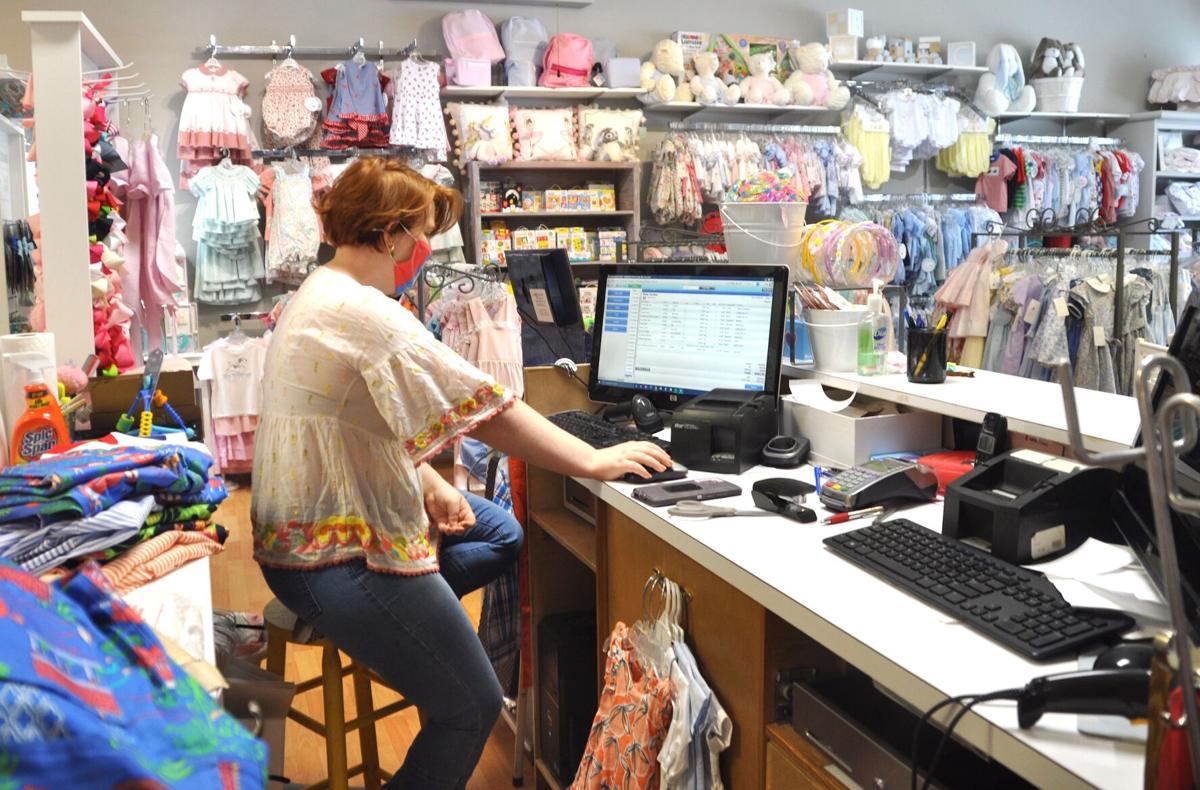 Catherine Gouge works on the computer at Pitter Patter and Caroline's in downtown Aiken. (Dede Biles/Staff) 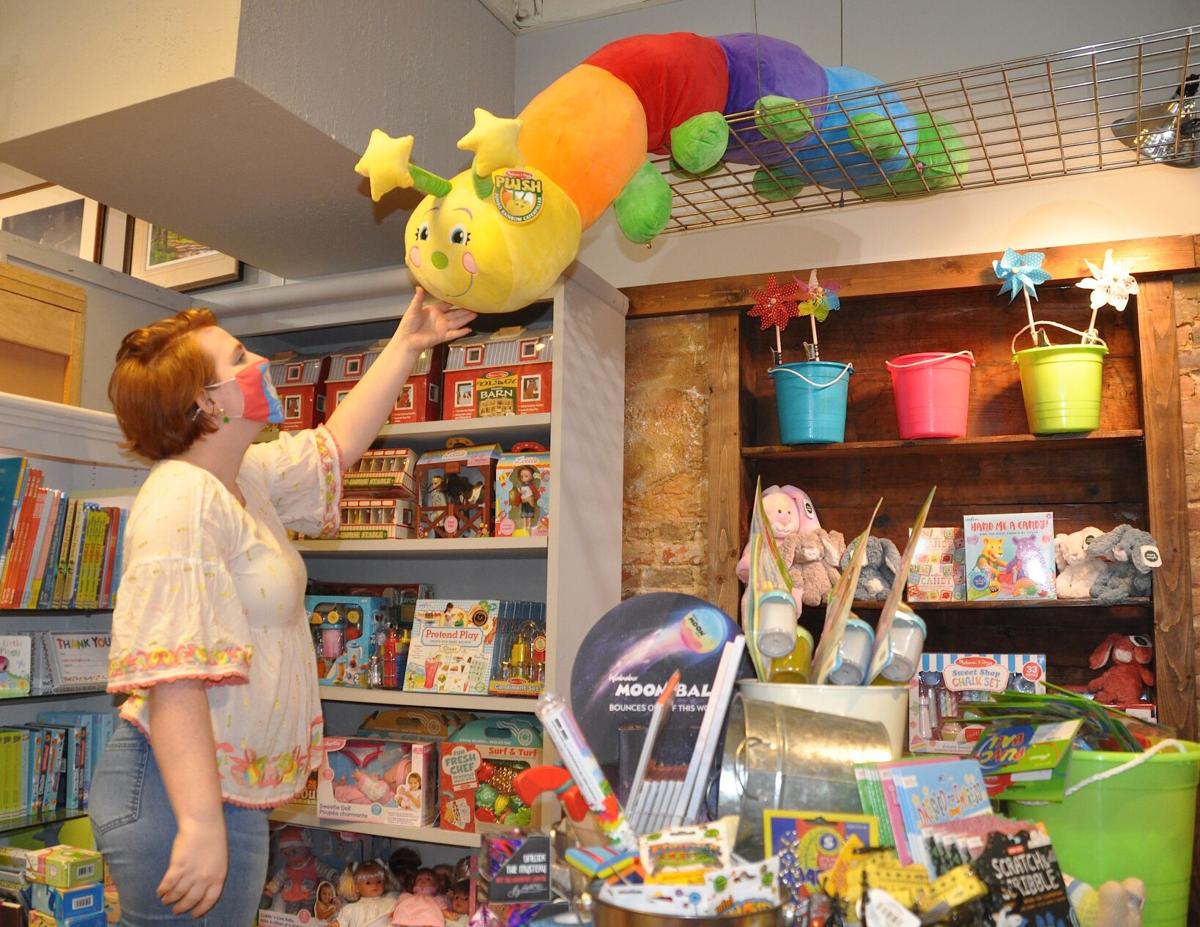 Catherine Gouge looks at one of the stuffed animals for sale at Pitter Patter in downtown Aiken. Caroline's, another business, also is located in the same space. (Dede Biles/Staff) 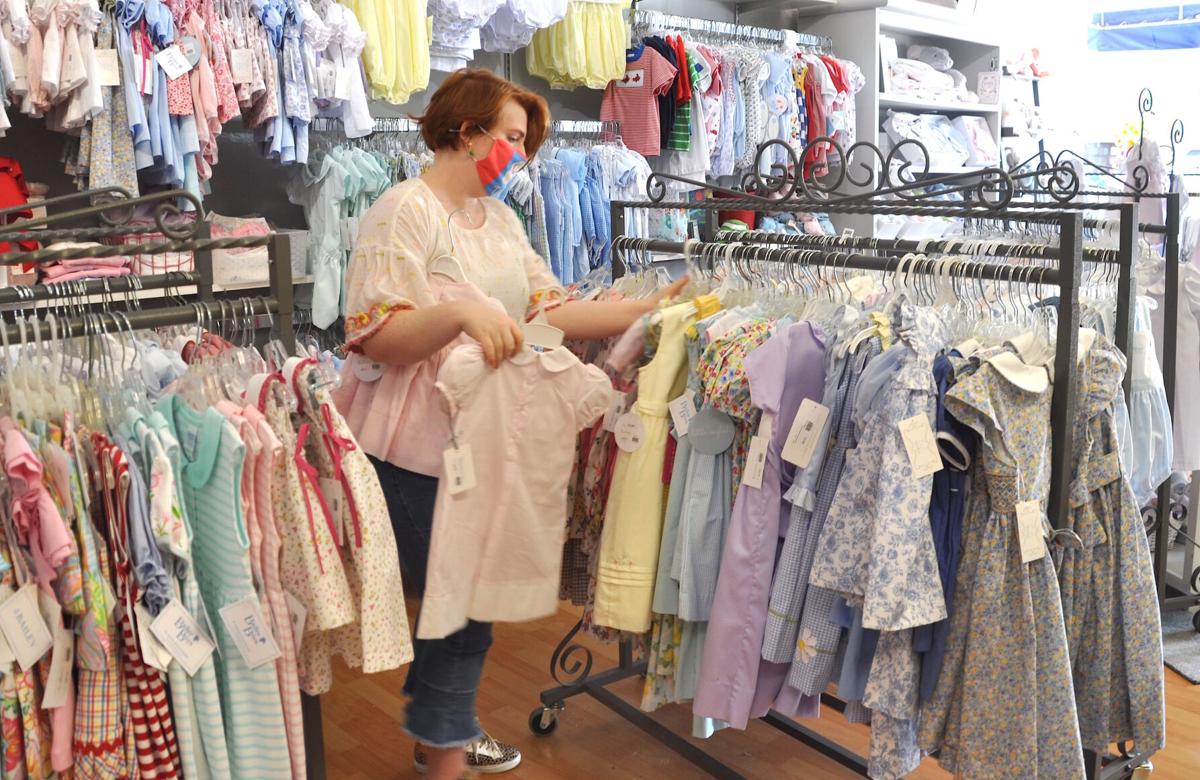 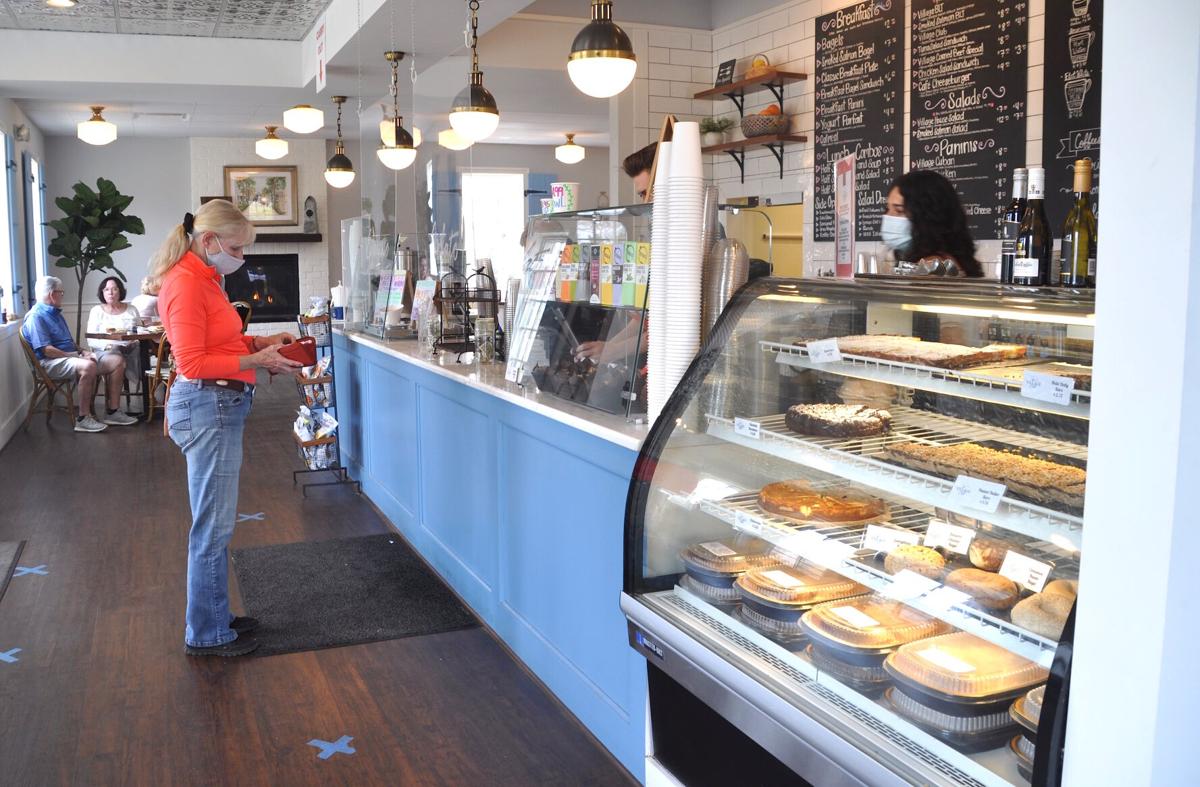 A customer places an order at The Village Cafe, which is located in The Village at Woodside in Aiken. (Dede Biles/Staff) 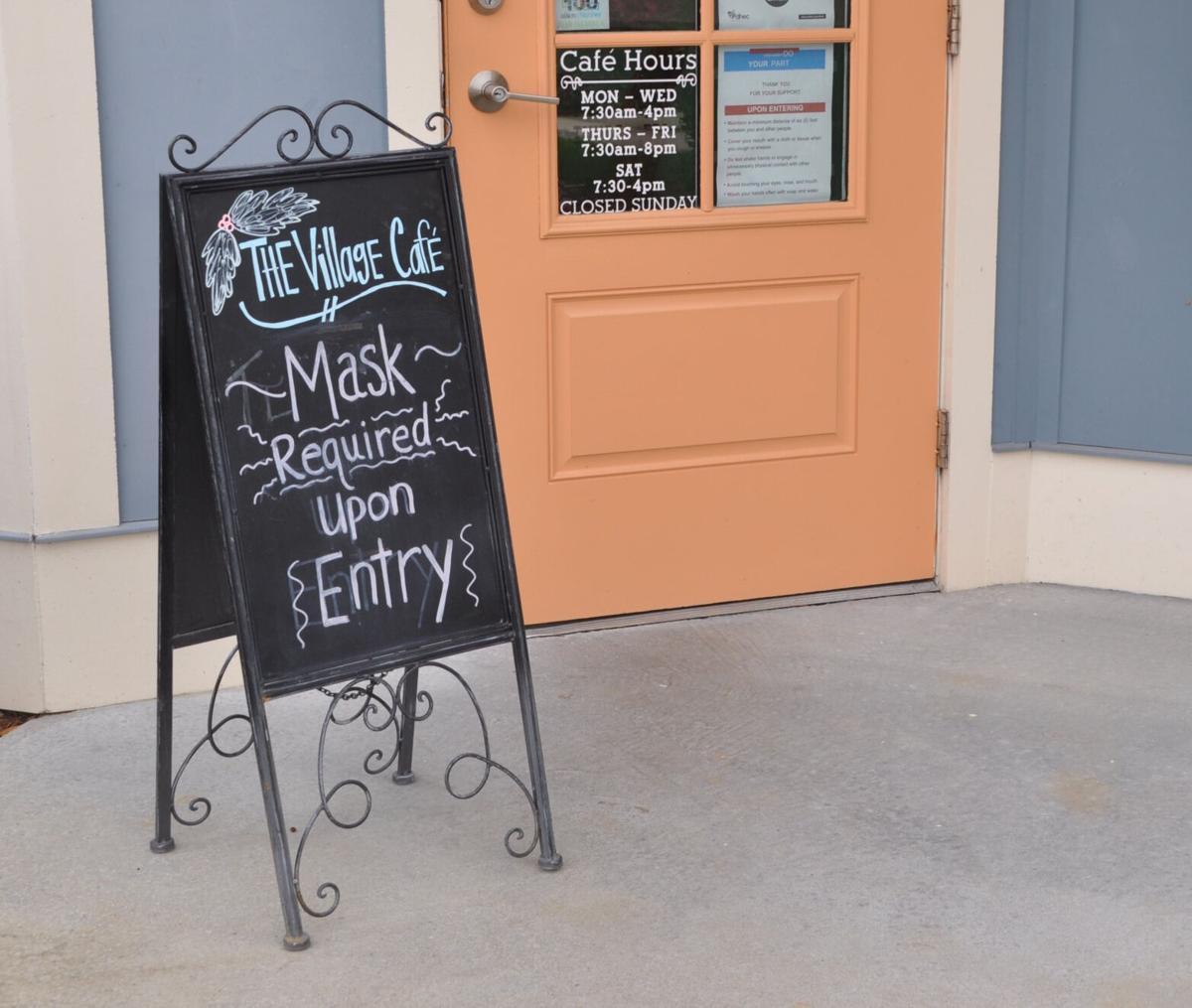 Face masks are required at The Village Cafe in The Village at Woodside on Aiken's Southside. (Dede Biles/Staff) 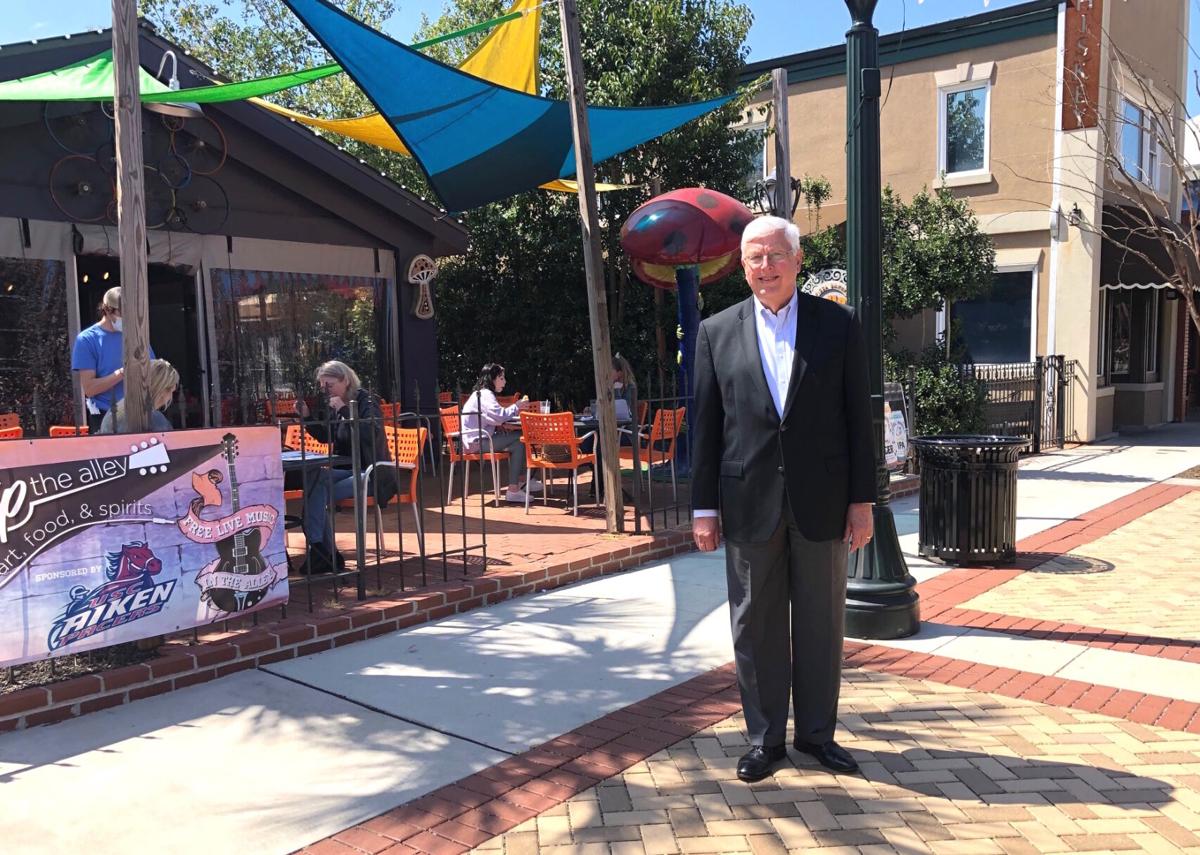 Aiken Chamber of Commerce President and CEO David Jameson visits The Alley, where diners were eating around lunchtime at Mellow Mushroom. (Dede Biles/Staff)

Catherine Gouge works on the computer at Pitter Patter and Caroline's in downtown Aiken. (Dede Biles/Staff)

Catherine Gouge looks at one of the stuffed animals for sale at Pitter Patter in downtown Aiken. Caroline's, another business, also is located in the same space. (Dede Biles/Staff)

A customer places an order at The Village Cafe, which is located in The Village at Woodside in Aiken. (Dede Biles/Staff)

Face masks are required at The Village Cafe in The Village at Woodside on Aiken's Southside. (Dede Biles/Staff)

Aiken Chamber of Commerce President and CEO David Jameson visits The Alley, where diners were eating around lunchtime at Mellow Mushroom. (Dede Biles/Staff)

For Aiken businesses that have struggled because of disruptions caused by the novel coronavirus pandemic, the ability to adapt to change has been the key to survival.

“There have definitely been some parts that were rougher than others during the last year, but we’re coming out on the other side okay,” said Catherine Gouge, who manages Pitter Patter Children’s Boutique and Caroline’s Boutique for her parents, Tony and Leslie Gouge. “We’ve learned a lot of really good things,” she added.

The downtown stores have strengthened their online presence, with improvements to websites that Gouge described as “not really functional” prior to COVID-19.

“We didn’t have a lot of our products online, but now I would say about 75% of our products end up on the websites at some point,” she said earlier this month. “We typically get an order a day, if not more. We have found new customers in different parts of the country that have become regulars. Last week alone, we shipped to Texas, California and Rhode Island.”

Curbside pickup and free delivery in Aiken, which weren’t offered before, now are available at Pitter Patter and Caroline’s. Virtual baby registries also are another new option.

And Gouge believes all are here to stay.

“There is such a convenience factor,” she said, “especially for busy moms.”

Sanitization has become routine in the stores, and Gouge doesn’t plan to abandon the more rigorous cleaning process anytime soon.

“I never thought before how many people touch a pen in a day,” she said. “We work around kids in here, and when they’re in school, they’re exposed to a lot of germs. This (disinfecting surfaces) helps keep away the stomach bugs and things like that.”

In general, Gouge concluded, “There hasn’t been anything that’s been too cumbersome or too hard to do during this pandemic. All the things have ended up being helpful; and they have, I think, made us a better business.”

She also believes that area residents have made it a priority to shop at downtown Aiken stores, which has provided an important financial boost.

“We are very lucky to live in Aiken, where so many people support small businesses,” Gouge said. “Especially around Christmastime, we had people specifically say, ‘I’m doing all my shopping locally.’ They just really made a point of letting us know they were trying to support us. They were shopping with intent. They weren’t shopping for just anything. They wanted to buy it in Aiken.”

Based on what Aiken Chamber of Commerce President and CEO David Jameson has observed and heard from others in the business community locally, Gouge’s experiences during wave after wave of COVID-19 outbreaks have been typical.

“In the last 12 months, I would say that every business owner or manager has really had to think hard about ways to survive,” Jameson said. “That probably was the first thing on everybody’s mind last March: How am I going to survive? What’s going to happen to my business? There really was a lot of creative thinking, innovative thinking. You had to dig deep into your soul and say: ‘Can we do this? How are we going to do this?’ I saw that all around town in so many different business sectors.”

A $1-million small business loan package put together by the City of Aiken helped some establishments stay afloat.

The Aiken Corporation, Security Federal Bank and the Chamber of Commerce also were involved in that coronavirus relief effort.

"Certainly, there were some weak spots, but I honestly believe that Aiken came through 2020 better than most people thought we would," Jameson said.

As the owner of The Village Cafe in partnership with Rick Steele, Charlie Hartz has had to explore new ways to serve customers at the restaurant, which is located in The Village at Woodside.

“In the past, what people cared about was a clean restaurant that served good food and had good service,” Hartz said. “While those things are still important to people, what has really move up the list and is at the forefront of people’s minds is safety and sanitation. And part of that is the trust between restaurants and their customers.

“At The Village Cafe,” he continued, “we feel like we have a bond with our customers and that they really trust us to have their best interests and their health in mind. We clean and sanitize. The employees wear masks and gloves. And if we determine that there is an issue with our employees, we won’t hesitate to close the restaurant until everybody has been tested and the restaurant has been sanitized again.”

Service options that were offered for the first time or grew more popular during the pandemic included takeout, curbside delivery and DoorDash delivery.

“We also started doing meals that you can heat up at home,” Hartz said. “We get them ready for your oven.”

For a while during the pandemic, no indoor dining was allowed at restaurants in South Carolina. Then there was a 50% occupancy limit along with other restrictions.

But not all customers, Hartz has found, have been ready to enjoy dine-in meals yet.

Before to the pandemic, “we had takeout, but it was only a very small portion of our business,” he said. “Now, it’s probably 30%.”

Hartz also is a Dunkin’ franchisee who has three stores, two in Aiken and one in North Augusta.

“Pre-COVID, about 60% of our business was drive-thru and 40% came in the front door,” he said. Now, even though all of the various pandemic-related restrictions have been lifted, 80% of the business at the Dunkin’ stores operated by Hartz is drive-thru and only 20% takes place inside.

Going forward, “what the big brains are telling us” is that the new Dunkin’ restaurants will be “drive-thru only or have much smaller lobbies,” Hartz said. “People are creatures of habit, and I think their habits have changed.”

His Dunkin’ on Whiskey Road in Aiken used to have a Baskin-Robbins ice cream parlor inside, but Hartz stopped selling frozen desserts there in December.

Vaccination of Savannah River Site workers expected to 'ramp up'

“It had run its course; it became unprofitable,” said Hartz of his Baskin-Robbins franchise.

He also believed that the restrictions on restaurants earlier during the pandemic made it more difficult to sell Baskin-Robbins products.

“Ice cream is very visual, and for a long time, we didn’t have people in the store,” Hartz said. “Sales slowed down, so we decided to focus our efforts on the Dunkin’ side of the business.”

At Whiskey Alley and The Alley Downtown Taproom, business is back to usual in many ways, said Norman Dunagan, who is a co-founder of both Aiken establishments.

Early during the pandemic, Whiskey Alley became more like a grocery store than a restaurant, selling essentials such a milk, toilet paper and bread.

“We could get supplies that the grocery stores couldn’t,” Dunagan said.

After a temporary shutdown and before customers were allowed to hang around inside again, The Tap Room served beer in plastic cups that purchasers could drink in The Alley.

“Moose Nicholson, our marketing director, did an amazing job of communicating anything we did to our audience (on social media),” Dunagan said. “He had a good mixture of COVID updates and made sure that people saw pictures of the food we were serving at Whiskey Alley.”

Nicholson also engaged customers by using photos of them in a campaign that praised them for doing things like wearing a face mask and visiting the Whiskey Alley kiosk for a touchless food pickup, Dunagan said.

Also during the pandemic, The Tap Room started a Froth Scouts program that has a monthly membership fee.

Benefits include discounts on beer served in The Tap Room. Members also receive a curated variety pack of bottled craft beer each month to drink at home.

“The Froth Scouts membership brings something special for everyone. Do we stay home? Do we get on with our lives? Well, a Froth Scout gets the benefit of both,” according to the Taproom’s website.

Not every business, however, has had to fight to remain solvent during the coronavirus era.

“We had some sectors that got surprised by having great business after the pandemic started,” Jameson said. “All of a sudden, home improvement and landscaping were rocking and rolling.”

Two groups of buyers living in urban areas primarily were responsible for the increase in demand for housing in Aiken, according to Jameson.

“In one group were people of retirement age or people who could have already retired and were still working,” Jameson said. “They said, ‘I’m getting out of here. I’m throwing in the towel. I’ve had my eye on Aiken for a while, and I’m going to do something about this and get some elbow room.’ Then there were other people who learned from their employers that they could continue to work remotely. They also wanted to find another place to live that felt safe and comfortable and down-to-earth.”

As a result of the growth in residential home sales, other businesses thrived.

“When people buy houses and move into a community, there is a tremendous impact,” Jameson said. “Residential home sales affect (in a positive way) appraisers, pest inspectors, painters and floor covering, drapery and decor businesses.”

Pat Cunning, president of Woodside-Aiken Realty and also the broker in charge, was anticipating a downtown because of COVID-19.

“We’ve had people who have made offers on houses without looking at them in person,” Cunning added. “They’ll see something on the internet (where virtual tours often are available) and say, “I want to put it under contact, but give to me two weeks to get there so I can physically go through it.’”