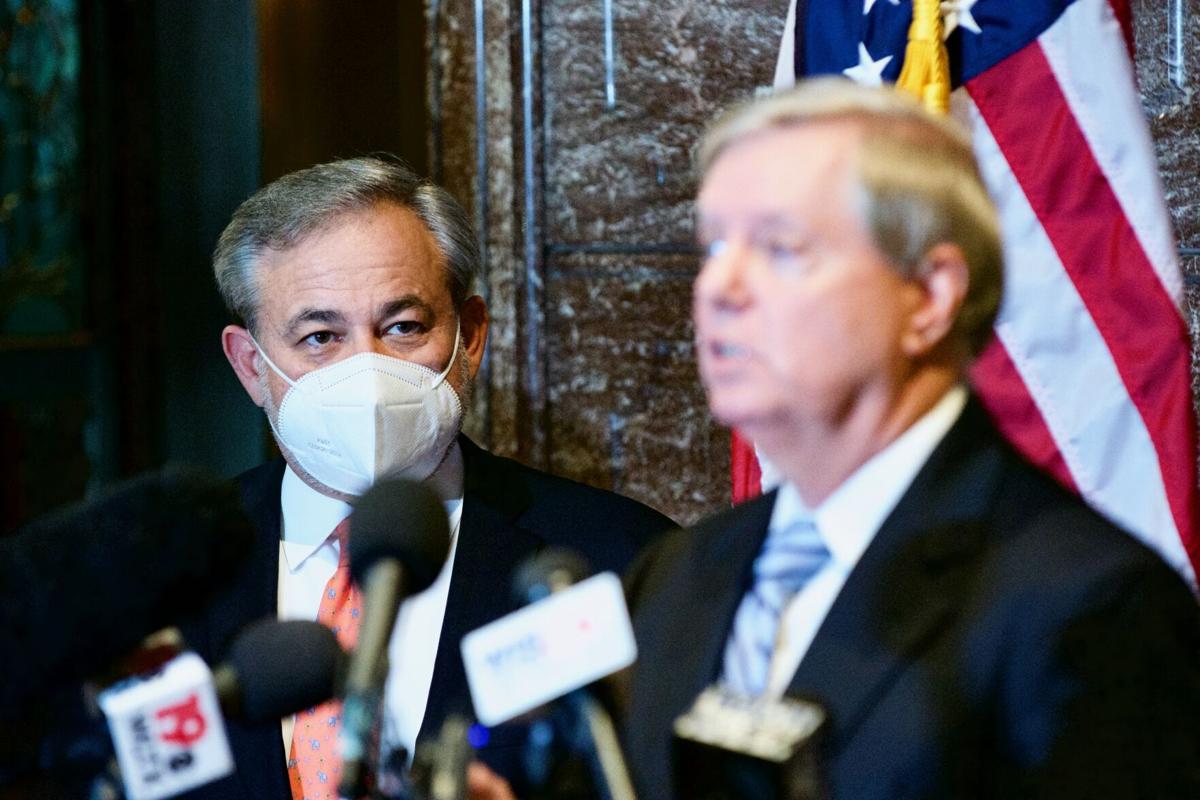 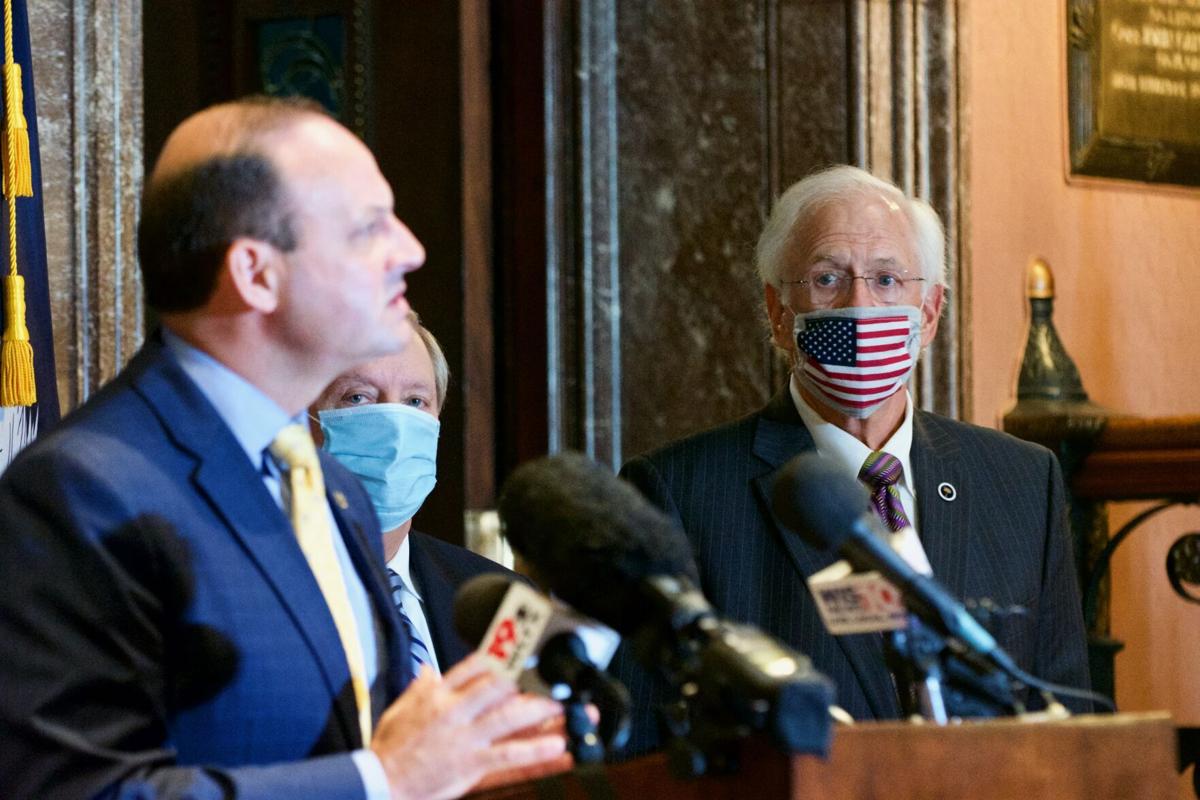 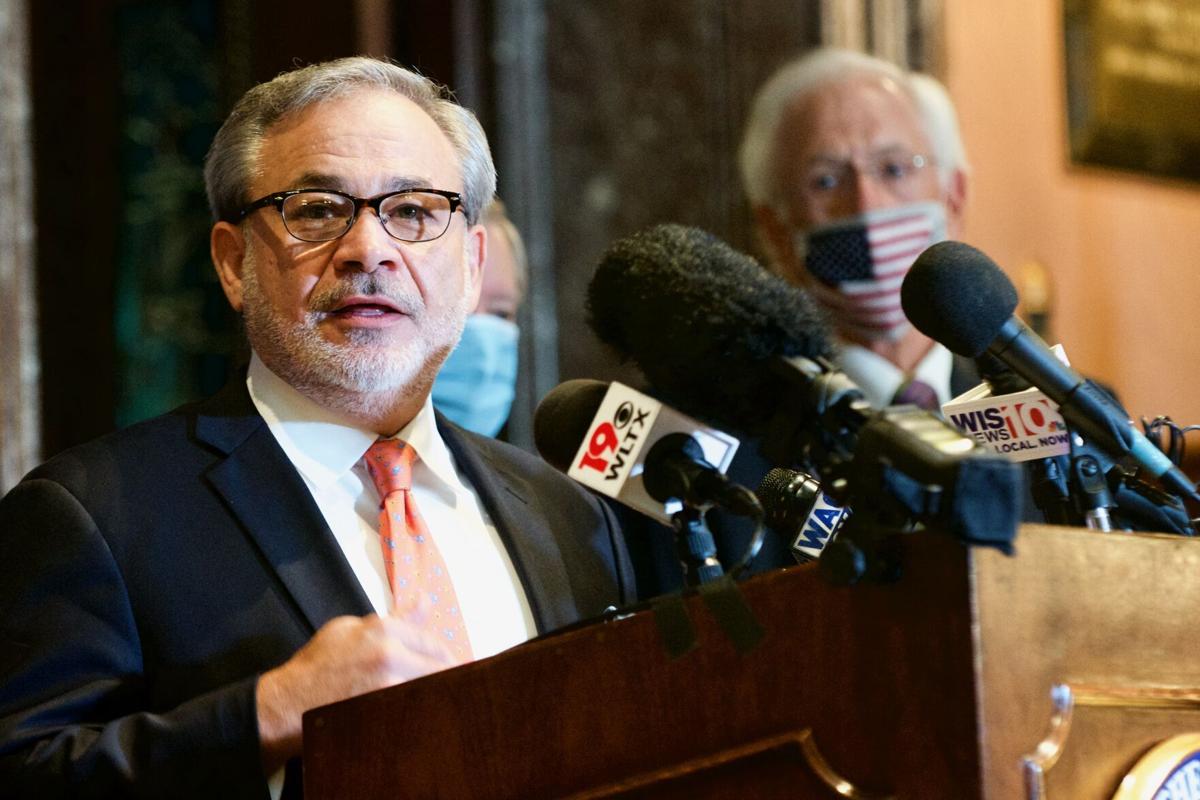 U.S. Secretary of Energy Dan Brouillette speaks Monday at the Statehouse in Columbia.

COLUMBIA — A monumental agreement has been struck between South Carolina and the federal government, namely the U.S. Department of Energy, concluding a years-long standoff and resolving expensive litigation over the long-term storage of plutonium at the Savannah River Site south of Aiken.

Terms of the deal include a DOE promise to remove from South Carolina 9.5 metric tons of plutonium by 2037, years ahead of prior projections, and an upfront $600 million payment from the Trump administration – the single largest legal settlement in the Palmetto State's history.

The money, to arrive in a few weeks, is sourced from a national judgement fund, effectively circumnavigating a preoccupied and deadlocked Congress. U.S. Attorney General William "Bill" Barr signed off on the move, officials said.

Should the cache of plutonium not be removed by Jan. 1, 2037, fines against the Energy Department, among other things, will be reinstated.

A senior Energy Department official said the common ground found was "more satisfactory" than what was statutorily called for.

Metric tons of plutonium are kept at the Savannah River Site, about 80 miles southwest of Columbia, at a retrofitted reactor complex known as K-Area. Its keeping and handling there has been controversial. The material is toxic and radioactive and is a key component of nuclear weapons. Plutonium has also been used to fuel deep-space vessels.

The high-wire accord, months in the making and recently polished, was unveiled Monday morning at a Statehouse ceremony featuring S.C. Attorney General Alan Wilson, U.S. Secretary of Energy Dan Brouillette and other elected officials.

"The Trump administration is committed to tackling our nation's toughest challenges where previous administrations have failed," Brouillette said, "including the removal and disposal of Cold War-era plutonium from the state of South Carolina."

He added: "This is a good day for South Carolina."

Wilson, a Republican who has openly and repeatedly sparred with the DOE, emphasized his and his team's "long-term commitment to preventing South Carolina from becoming a dumping ground for nuclear waste." It's a remark similar to one employed by opponents of Yucca Mountain in Nevada, and has often been applied locally by lawmakers like U.S. Sen. Lindsey Graham, R-S.C.

Asked by the Aiken Standard how the plutonium would be removed or where it would go, Brouillette suggested the plans are not yet finalized. But, he continued, the material could be processed and sent to southeastern New Mexico for burial at the Waste Isolation Pilot Plant, an approach known as dilute-and-dispose; could be staged elsewhere at another Energy Department facility; or could be utilized in a nuclear reactor.

Together, it's a grand effort to be shared by the National Nuclear Security Administration and Environmental Management, the Energy Department's nuclear remediation office. The two agencies already operate at SRS.

Exactly what will be done with most of the $600 million is up to the General Assembly and Gov. Henry McMaster, who was conspicuously absent from Monday's ceremony.

The governor, it turns out, objected to the arrangement. McMaster was not looped in, according to an Aug. 30 letter reviewed by the Aiken Standard, and believes the landmark deal neuters the state's position.

"To be clear, I appreciate your efforts to recover the economic and impact assistance payments owed to the state and your pursuit of this litigation more generally," the Republican governor and former attorney general wrote. "However, as I have repeatedly conveyed, it is of paramount importance that South Carolina not become a permanent plutonium waste repository."

Approximately $75 million is earmarked for attorney fees. McMaster took umbrage with this, too, and Wilson on Monday recognized the optics.

The congressman plans to work hand in hand with the local delegation, which includes Senate Majority Leader Shane Massey, R-Edgefield.

Both the consolidation of plutonium at the Savannah River Site and the underlying dispute from which Monday's historic settlement sprung predate Donald Trump's time in the White House and Brouillette's position atop the DOE.

But a lawsuit – now moot – spearheaded by Alan Wilson a few years ago gets to the heart of the matter.

South Carolina in early 2018, when Brouillette was the deputy energy secretary, sued the federal government seeking $200 million. The sum comprised two years, 2016 and 2017, of fines charged to the Energy Department for failing to remove plutonium from the Savannah River Site in a timely fashion.

Federal law mandated beginning in 2016 that the DOE pay South Carolina $1 million for each day, up to 100 days per year, the department did not process the metal at the Mixed Oxide Fuel Fabrication Facility or get 1 metric ton of it out the state.

The National Nuclear Security Administration, the Energy Department's semiautonomous weapons-and-nonproliferation arm, axed the languid MOX project in October 2018 – ahead of its forecasted completion date, months after then-Energy Secretary Rick Perry moved to do so, and after a separate legal battle with South Carolina that, at one point, reached the U.S. Supreme Court.

The MOX project, past due and cost bloated at the time of its protracted death, was a favorite of South Carolina politicians. Canceling the nuclear fuel venture, according to Graham, was a "shortsighted" and "colossal" mistake.

"Stopping a program that is 70% complete and replacing it with a new half-baked program that won't work is yet another example of what is wrong with Washington," Graham said in 2018, alluding to dilute-and-dispose, the cross-country MOX alternative. Exactly how complete the MOX plant was remains unclear.

Graham on Monday lamented the mixed oxide flop, saying the world is worse for it.

A federal judge last summer tossed the Palmetto State's $200 million case, a dismissal that followed a failed round of settlement negotiations and a months-long hope things could be fixed sans judge.

"Congress could have appropriated money for economic and impact assistance, or it could have broadened the DOE's discretion to reprogram funds," Federal Claims Judge Margaret M. Sweeney wrote on Aug. 20, 2019. "But it did neither."

In oral arguments heard May 5 by a panel of judges from the U.S. Court of Appeals for the Federal Circuit, the Palmetto State's counsel likened the outstanding fines to unpaid rent.

"When we use the term rent, it's more in an analogous way," John W. Roberts said. "We're saying that Congress gave them a choice: You either can store the plutonium in South Carolina and make the payments, or you can remove it and you do not have to make the payments. And that's the choice."

The federal government's counsel, Tara K. Hogan, quickly pushed back on the characterization. A judge also probed the comparison.

The agreement publicized Monday corroborates what Alan Wilson, the state attorney general, told the Aiken Standard in late July: That South Carolina and the federal government had reached a deal in principle, and that the finer deals were being ironed out.

"We're just trying to get the numbers to work with the federal government and what they owe the state of South Carolina," he said last month. "I am guardedly optimistic that we are going to get this thing settled, but I want to be extra guarded in managing expectations."

"This is as about as well an ending as you could've expected," the senior senator said.

Both the state attorney general and Brouillette were personally involved in crafting the arrangement reached this summer, a senior Energy Department official said. The two committed to "find common ground that would be mutually beneficial to both parties," the official elaborated, "and I think having those two involved at the highest levels of their respective departments is really what greased the skids on this deal and made it happen."

Alan Wilson in July described the energy secretary as a "great guy" able to recognize a win-win situation.

"We've had some of the most productive conversations with the federal government in the last six weeks than I've had in the last six years," he said at the time. On Monday, he thanked Brouillette and other Trump administration executives for what had been accomplished.

"Our state did not waiver in demanding what is right and just for our people," he said.