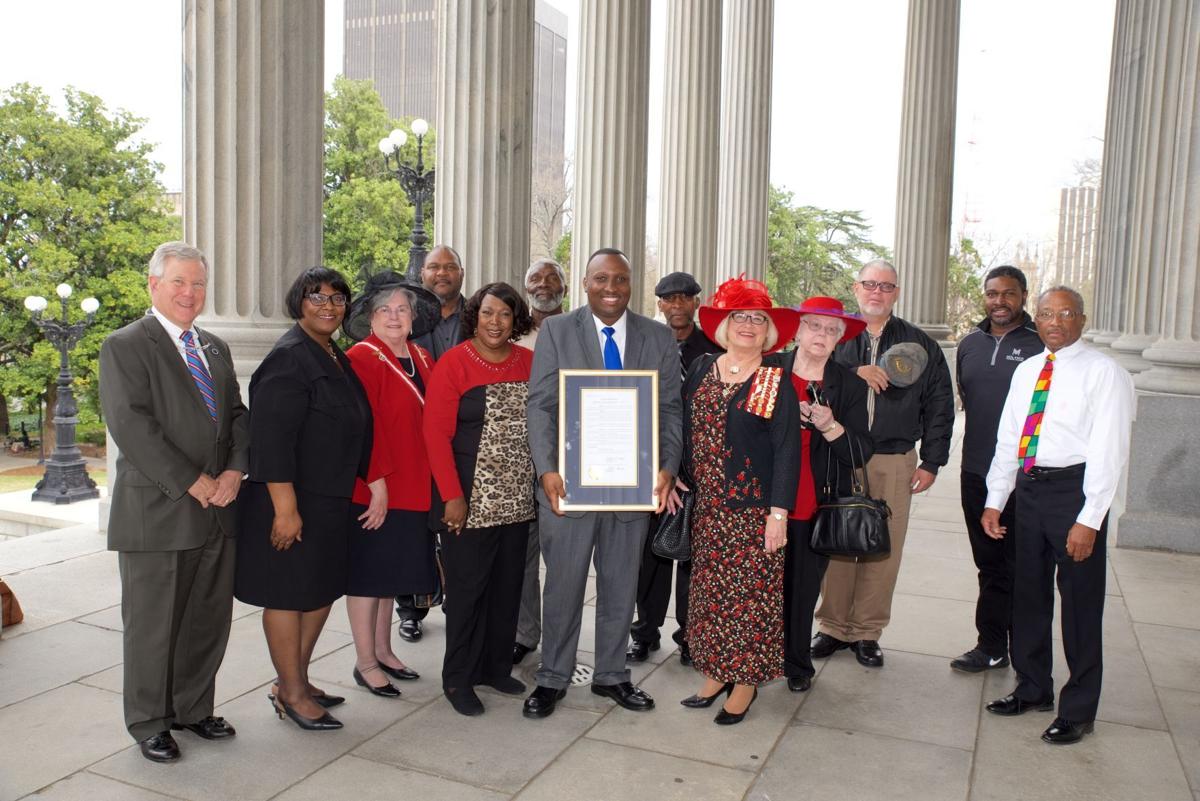 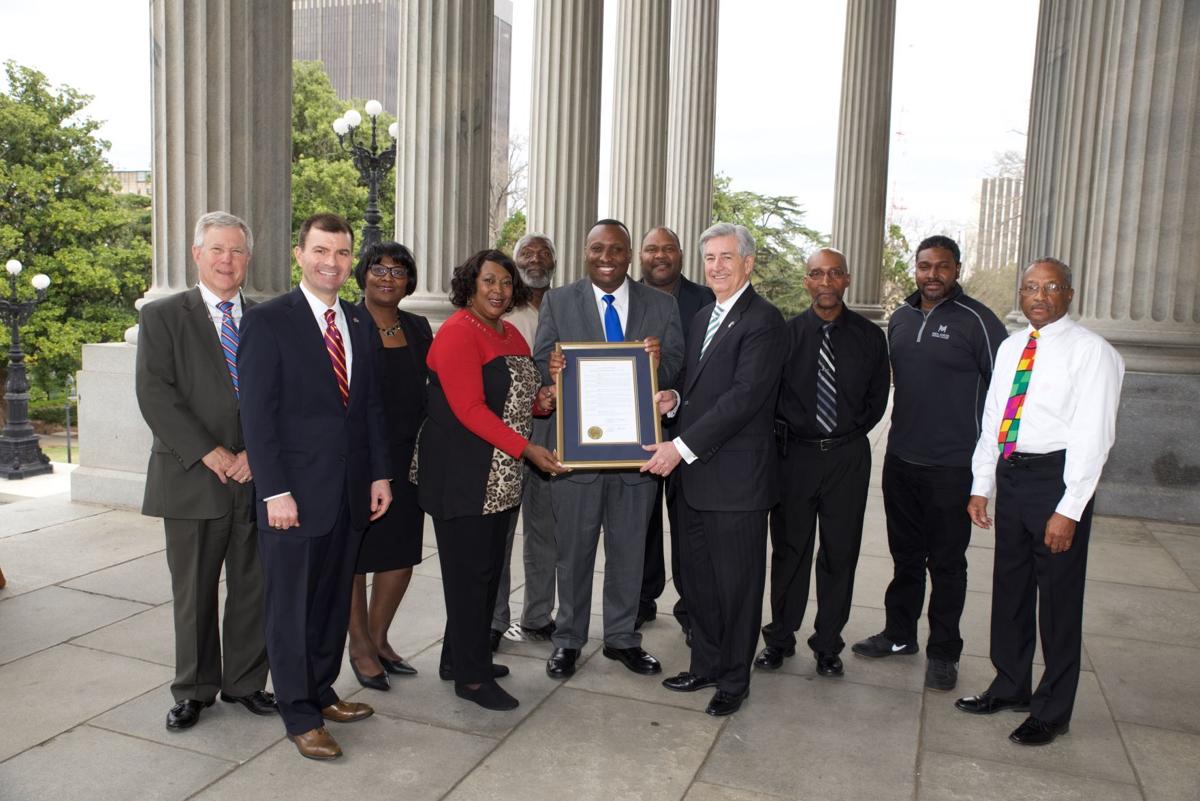 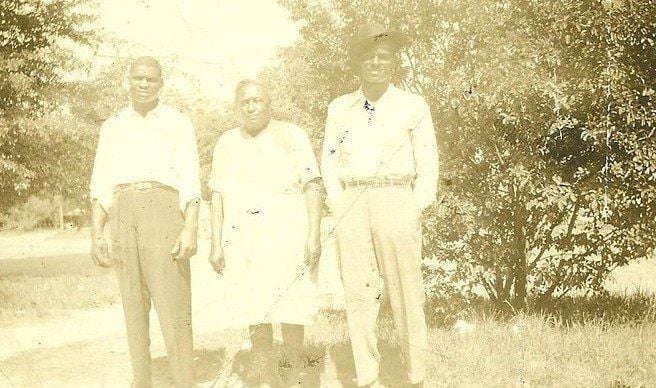 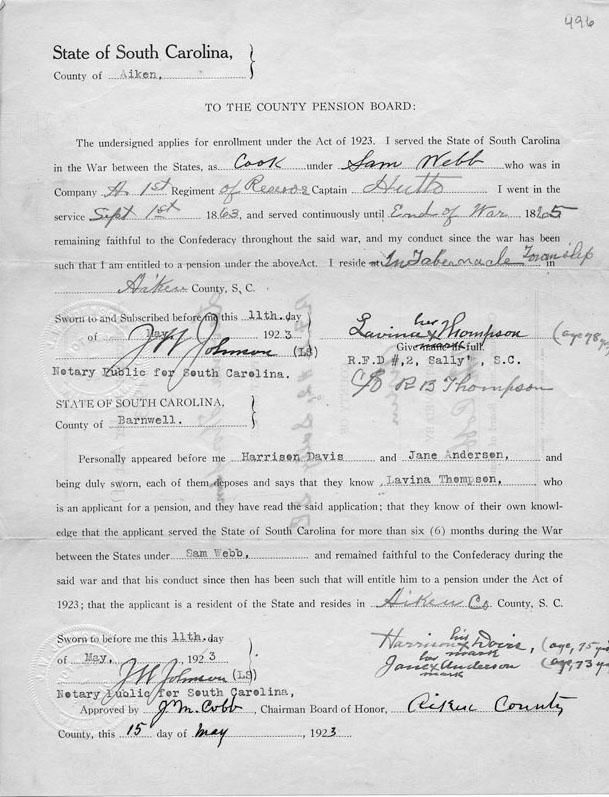 An African-American Confederate veteran with ties to Aiken County was recently recognized by the S.C. Senate after her family discovered what they describe as a remarkable story.

The Senate presented a resolution on Feb. 21 to the family of Lavinia Corley Thompson, of Salley, to honor Thompson, who served in the Confederacy during the Civil War.

Thompson is the only known female African-American Confederate veteran in the state of South Carolina at this time, said Tonya Guy, with the Old Edgefield District Genealogical Society.

Guy conducted the research on Thompson in collaboration with Betsey R. Bloomer. It was nearly 10 years ago when researchers discovered Thompson, she said.

Later, one of her relatives, Dr. Walter Curry, of Columbia, also was conducting research on her. Guy said she then turned over the information to him.

"I sat on it for a while, for a couple of years until something came to me and said well, we need to kind of get her recognized," Curry said.

Thompson is Curry's great-great-great-grandmother, who he calls "Grandma Viney." He said after learning more about her life, he thought her story was remarkable.

Curry began speaking to descendants and family members, who agreed she needed recognition, as well. He then sent the information to Sen. Nikki Setzler, D-Lexington, who represents the Wagener-Salley area. He said Setzler presented the resolution, which has been approved by the body.

Thompson was born June 3, 1844 to Robert Staley and Phillis Corley, according to information provided by Guy from the Old Edgefield District Genealogical Society.

Thompson served as a cook for the Confederacy under Sam Webb, who was in Company A, 1st Regiment of the Reserves. Curry said she served continuously from Sept. 1, 1863 to the end of the war in 1865.

Thompson would have been wherever Webb went, Guy said.

"Even if she was in camp, it could have been treacherous because they could've been overrun by a cannon, fire coming over," she said. "It was treacherous to be in camp. They were just as much in the line of fire as if they were on the battlefield."

"We're actively collecting information about all of the African-Americans we can find that served in the war in any capacity, because we consider them to be Confederate veterans," she said. "We have all these fabulous stories that come out of the war. It is an unsung part of our heritage that we would really like to explore and make known that these people are heroes in our eyes."

She added there were African-Americans who later received Confederate pensions but some could have died before that could happen. An exact number of how many black people served for the Confederacy is unknown.

Thompson, whose occupation was in farming, applied for a Confederate pension in 1923 and the pension was approved, Curry said.

"I can tell you, she was a sharecropper and her being a sharecropper in the South during that time, money was very scarce and so for her to apply for that pension and the state approved it, I mean that money was used to help the family," he said.

Thompson had several children. One of them was Curry's great-great-grandfather, Oscar Thompson.

"He had my great-grandmother, three outside children, and then got married and had 10 kids. He was also a landowner. He owned over 100 acres of land that we still have in our family today," Curry said.

He said he can infer that he may have received some of Thompson's pension money and used it to purchase land for his family.

Thompson died at the age of 84 on June 4, 1928 in Aiken County, Tabernacle Township and was buried at an unmarked grave at Smyrna Baptist Church in the same community. Guy said there are efforts to get a Confederate tombstone on her grave.

Curry calls his Grandma Viney's courage a legacy to the Thompson family. He and several family members and supporters joined him at the Statehouse for her recognition.

Many have called into question the representation of African-Americans as Confederate veterans.

In a (Charleston) Post and Courier news story published in October, Boston historian Kevin Levin told the newspaper, the idea of black Confederate soldiers took hold in the 1970s as a response to the popular TV miniseries, "Roots."

He called the stories about slaves in the war "distorted to make them out to be soldiers."

This story has been updated from its original version.