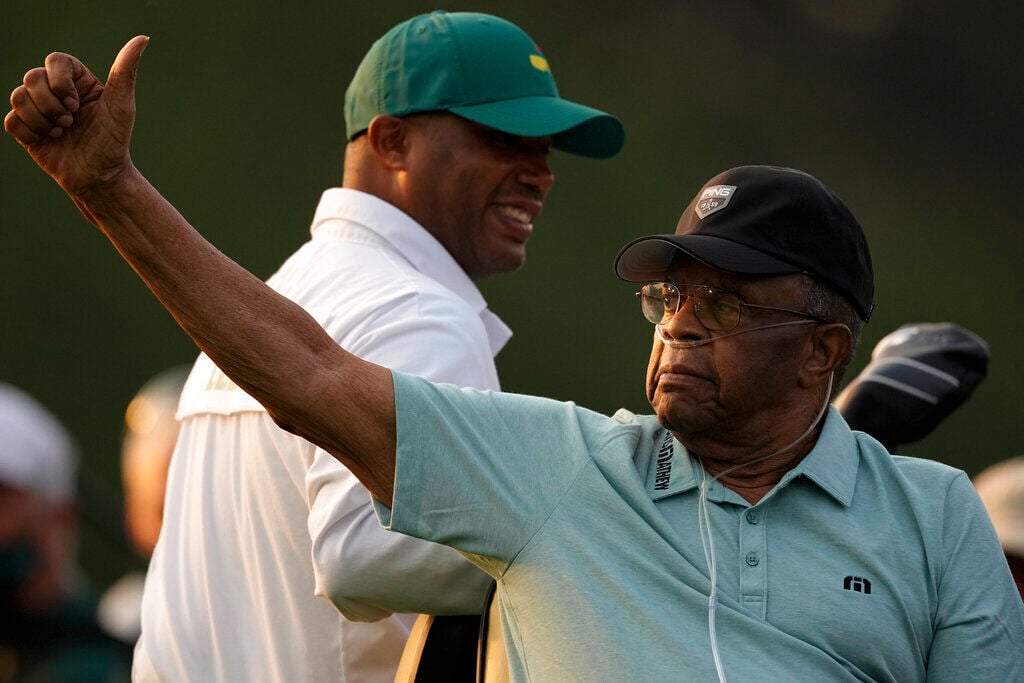 Lee Elder gestures as he arrives for the ceremonial tee shots before the first round of the Masters golf tournament on Thursday, April 8, 2021, in Augusta, Ga. (AP Photo/Charlie Riedel) 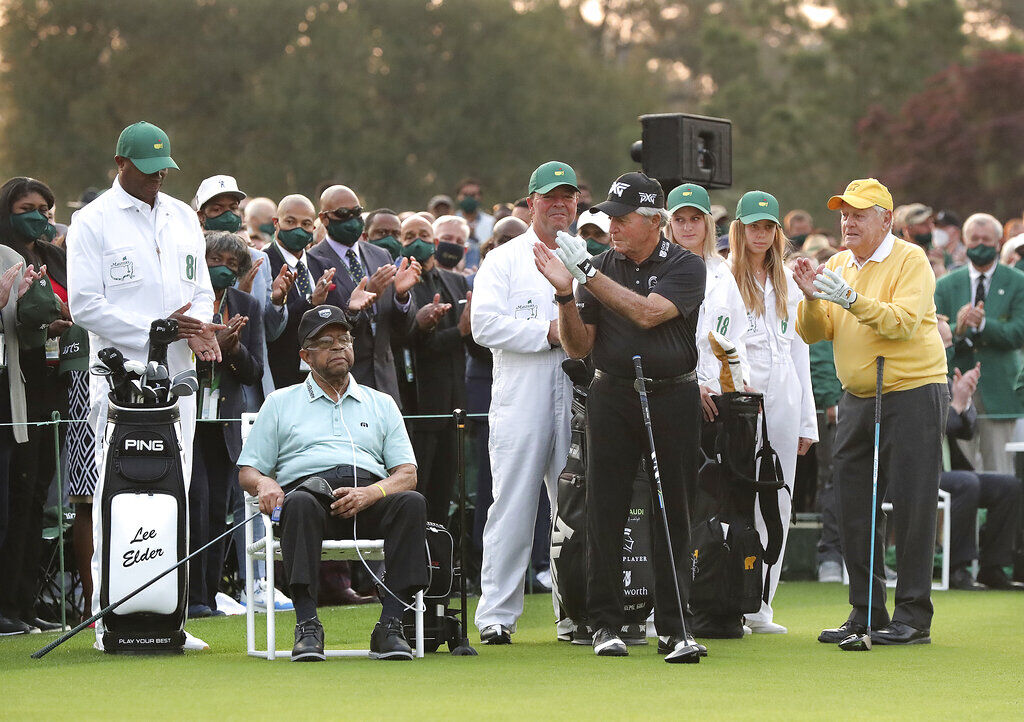 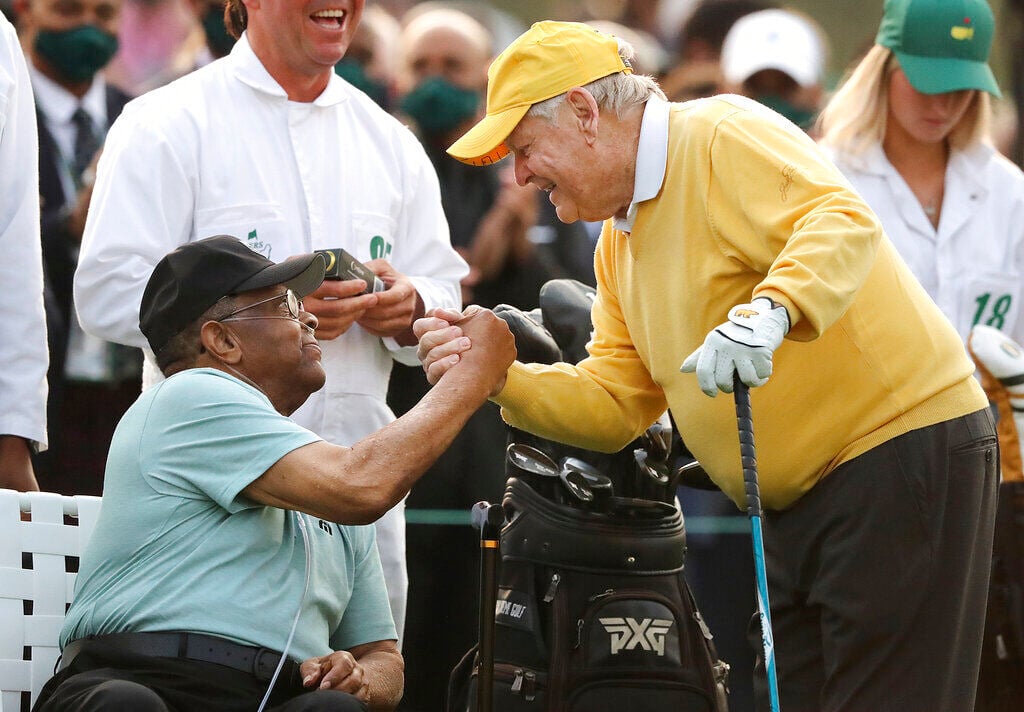 Lee Elder gestures as he arrives for the ceremonial tee shots before the first round of the Masters golf tournament on Thursday, April 8, 2021, in Augusta, Ga. (AP Photo/Charlie Riedel)

AUGUSTA — In 1975, Lee Elder made history when he became the first Black golfer to compete in the Masters Tournament.

Forty-six years later, Elder made history again at Augusta National Golf Club. And this time, he didn’t even have to hit a single shot.

“For me and my family, I think it was one of the most emotional experiences that I have ever witnessed or been involved in,” Elder said. “It is certainly something that I will cherish for the rest of my life because I have loved coming to Augusta National and playing here the times that I have played here with many of my friends that are members here.”

In November, Augusta National and Masters Chairman Fred Ridley announced that Elder would be invited to participate this year as an honorary starter. The club also established endowed scholarships at Paine College, an HBCU in Augusta, for men’s golf and women’s golf.

Elder, 86, is not in good health. He was driven to the first tee Thursday morning in a cart, and he carries oxygen with him.

So, instead of hitting a tee shot in front of hundreds of patrons, he acknowledged the moment by raising his driver into the air.

In his opening remarks, Ridley praised Elder as a man who “blazed a trail that will inspire the game of golf and future generations of players.”

He also noted that several Black members of the PGA of America were in attendance, as well as dignitaries from Paine College.

Elder missed the cut in his 1975 debut, but later came back to compete five more times. His best finish was a tie for 17th in 1979.

“I think that having Lee there was the right thing to do, a nice thing to do,” Nicklaus said after the ceremony.

Player, the first international champion at the Masters, recalled bringing Elder to his home country of South Africa in the late 1960s.

“You can imagine at that time in history how encouraging it was for a young Black boy to see this champion playing, and then of course with Tiger Woods coming on, it was just absolutely fantastic for the people of any color around the world,” Player said.

Woods, the first minority golfer to win the Masters, is not in Augusta this week because of injuries he suffered in a February car crash. In 1997, Elder drove to Augusta to witness firsthand Woods’ historic victory.

Masters champions Phil Mickelson and Bubba Watson were among those playing this week who were on hand for the 7:40 a.m. ceremony.

There also was a large group of patrons wearing green caps with “1975” emblazoned on the front. The caps, designed by NBA star Steph Curry, were an homage to the year Elder made his Masters debut. One side featured a quote from Elder – “Stay the course” – and the back of the cap features Curry’s logo.

“I came here to celebrate a wonderful man, Mr. Lee Elder,” said James Williams of East St. Louis, Illinois. “Certainly in 1975 he was breaking the barrier here in a way, opening up golf to everyone. I’m so glad to see so many Black professional golf individuals here today to celebrate all of his accomplishments.”

Williams, who was making his third trip to the Masters, said the cap would be a keepsake.

“Celebrating this is extremely important,” he said. “(Golf) is making significant strides in the right direction, all around the country.”

“I came here to celebrate a wonderful man, Mr. Lee Elder. Certainly in 1975 he was breaking the barrier here in a way, opening up golf to everyone."

John Boyette is executive editor of the Aiken Standard. Reach him at jboyette@aikenstandard.com or 803-644-2364.