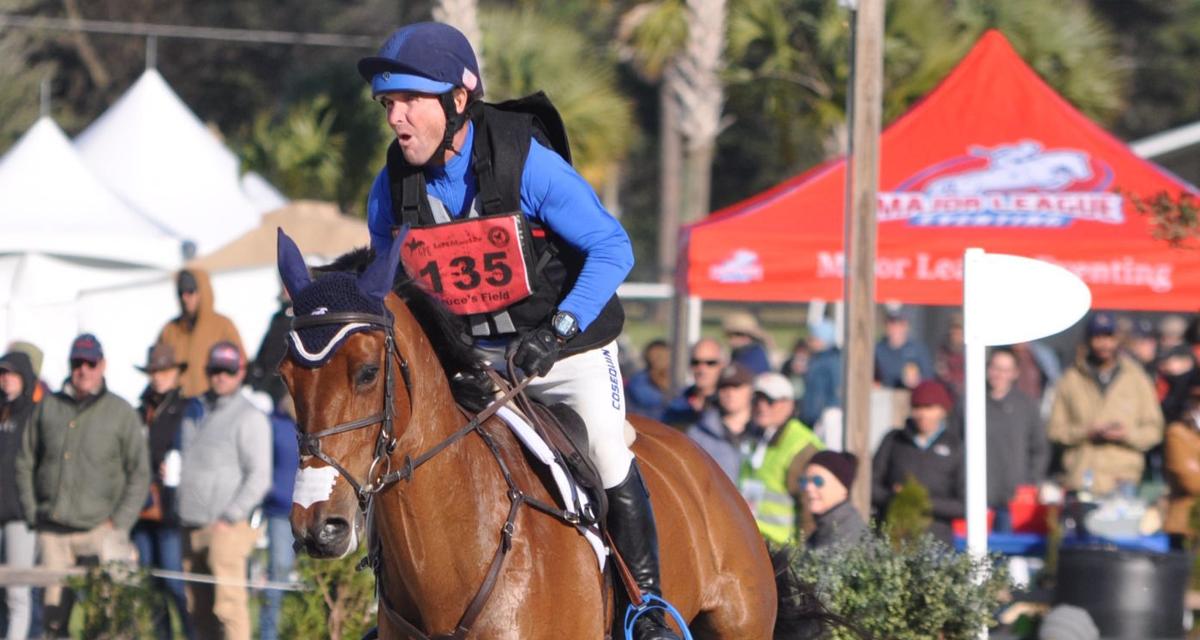 Phillip Dutton rides in a past $50,000 Grand-Prix Eventing competition at the Aiken Horse Park's Bruce's Field. 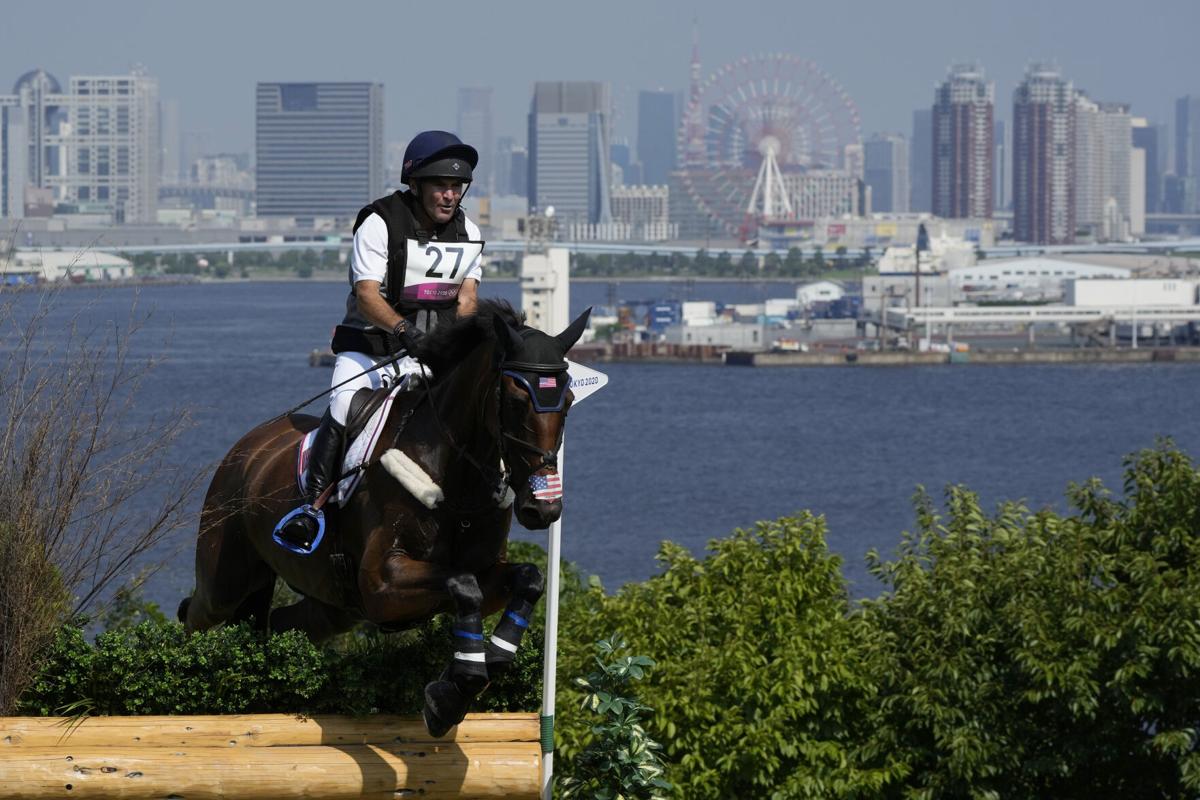 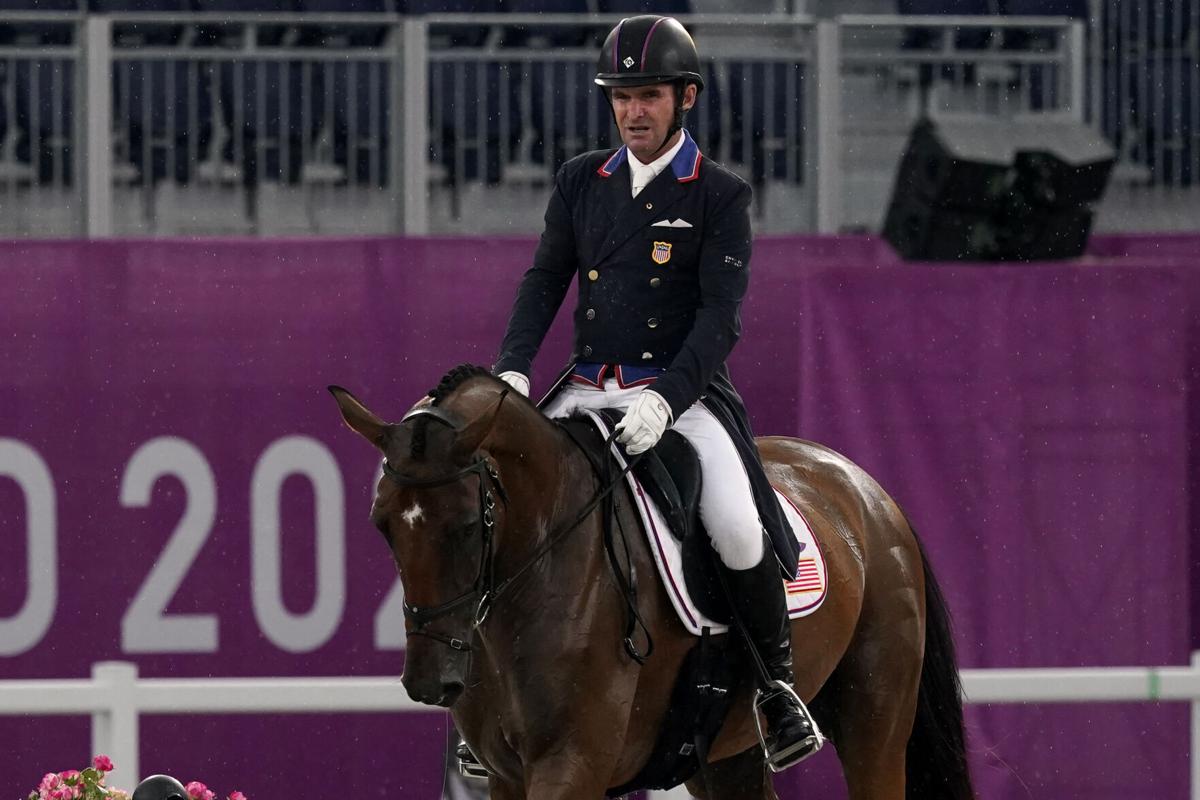 Phillip Dutton, riding Z, competes during the dressage phase of eventing at the Summer Olympics in Tokyo. (AP Photo/Carolyn Kaster) 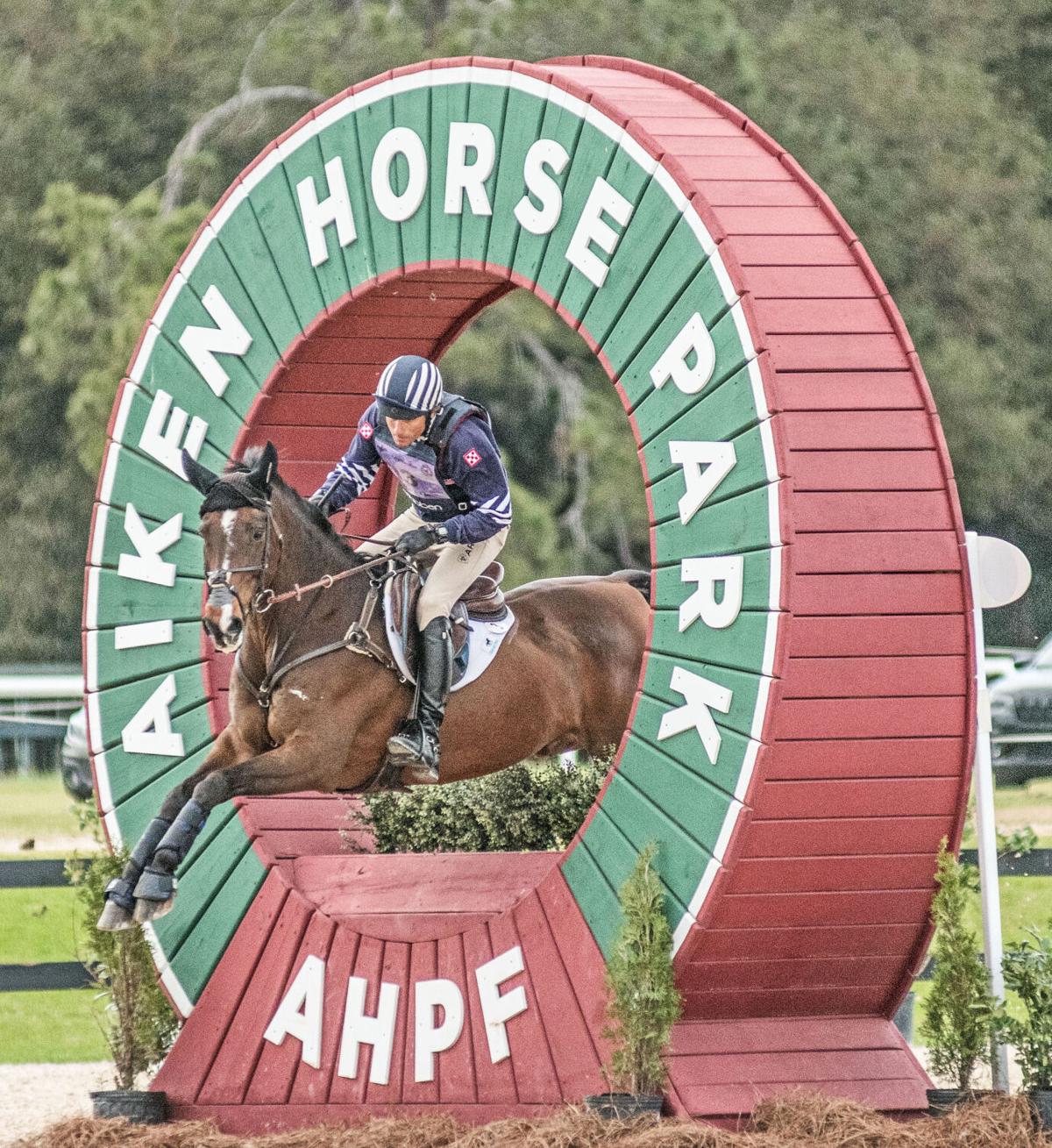 Boyd Martin his mount clear a jump in a past $50,000 Grand-Prix Eventing competition at the Aiken Horse Park Foundation's Bruce's Field. 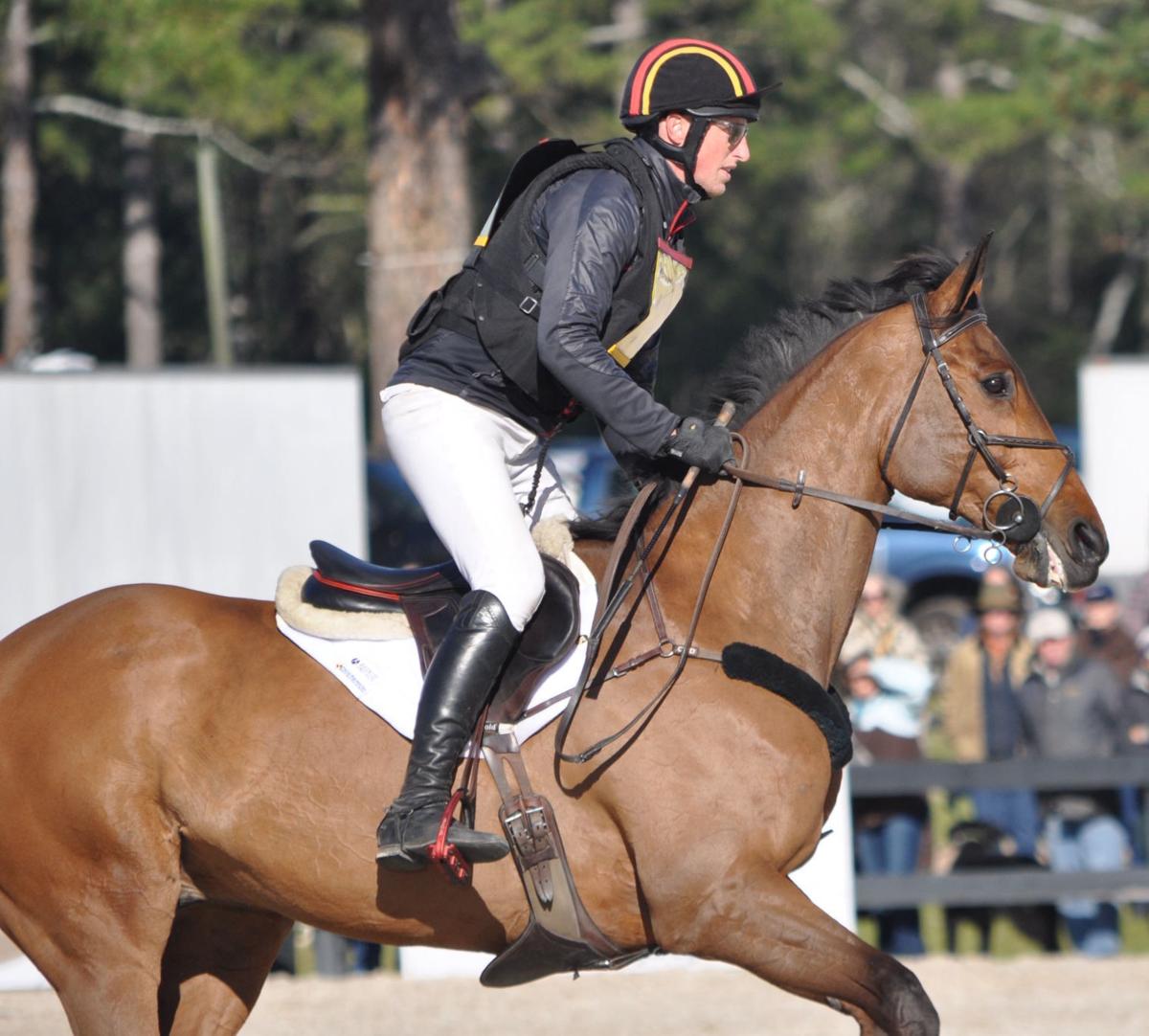 Phillip Dutton rides in a past $50,000 Grand-Prix Eventing competition at the Aiken Horse Park's Bruce's Field.

Phillip Dutton, riding Z, competes during the dressage phase of eventing at the Summer Olympics in Tokyo. (AP Photo/Carolyn Kaster)

Boyd Martin his mount clear a jump in a past $50,000 Grand-Prix Eventing competition at the Aiken Horse Park Foundation's Bruce's Field.

Even though he’s 58 years old, Phillip Dutton isn’t ready to stop pursuing his sport’s top prizes while being challenged by younger rivals.

He’ll be among the riders competing Friday and Saturday in the $50,000 Grand-Prix Eventing Festival at the Aiken Horse Park Foundation’s Bruce’s Field.

And Dutton isn’t ruling out the possibility of yet another appearance in the Summer Olympics, which is scheduled to take place next in Paris in 2024.

“It’s a bit too far away … but that’s not to say I’m bowing out,” said Dutton during a telephone interview Monday when asked if a return to the Olympics is one of his goals. “I’ll take it year to year and see what the horses are doing and how I’m doing.

“I’m far from retiring,” he continued. “While I’m doing it well and still have the horses (capable of high-level performances) I think I’ll keep going. I’m still enjoying it and still trying to improve.”

Dutton was a member of the U.S. eventing team that finished sixth in the Tokyo Olympics last year. It was the best Olympic performance by an eventing squad from this country since the 2004 Summer Games in Athens, where the U.S. earned a bronze medal.

“I’ve had a great run in the Olympics,” Dutton said.

While representing Australia, where he was born, Dutton won team gold medals in the 2000 Sydney Olympics and the 1996 Atlanta Olympics.

Dutton is the chairman of the Organizing Committee for the Grand-Prix Eventing Festival.

According to the Eventing Festival entry list as of Tuesday afternoon, Dutton is planning to ride two horses: Z and Sea of Clouds.

“He’s doing great,” Dutton said. “It will be his first run of the year. It will be good to get him out and get him back into the swing of things.”

Sea of Clouds is an 11-year-old thoroughbred gelding.

Dutton and his wife, Evie, used to own Red Oak Farm in Aiken, where he formerly trained during the winter.

Boyd Martin and Doug Payne, who were Dutton’s fellow U.S. team members at the Tokyo Olympics, also have horses entered in the Grand-Prix Eventing Festival.

Martin, who trains at Stable View near Aiken during the winter, is scheduled to ride Fedarman B, On Cue and Tsetserleg. The last-named was Martin’s Tokyo Olympics mount.

Both Martin and Payne are on the Grand-Prix Eventing Festival's organizing committee.

Among the other riders in the Eventing Festival’s field is William Fox-Pitt, who has three Olympic team medals – two silvers and a bronze.

While representing Great Britain, Fox-Pitt earned silver medals in 2004 in Athens and 2012 in London.

Fox-Pitt’s bronze medal is from the 2008 Summer Games in Beijing.

In the Grand-Prix Eventing Festival, Fox-Pitt will ride Rock Phantom.

Eventing, which has been described as an equestrian triathlon, has three phases: dressage, show jumping and cross-country.

During the Grand-Prix Eventing Festival, the dressage test ride is scheduled for 7:30 a.m. Friday, and the dressage competition will begin at 8 a.m.

Show jumping will start at 3 p.m.

On Saturday, the cross-country phase will begin at 12:30 p.m.

General admission tickets, if purchased online, are $25 each for a two-day pass or $20 apiece for a single day.

They will be available through Thursday at aikenhorsepark.org.

At the gate, no two-day passes will be sold. Single-day tickets will cost $25 each.

“We’re really excited because we are able to have spectators again (after restrictions in 2021 because of COVID-19),” Bostwick said. “We’ve expanded the event and have festival in the name because we have a number of different activities throughout the two days."

They include a Retired Racehorse Project Master Class during the lunch break on Friday between the first group of dressage competitors and the second.

Set for Saturday are a course walk with Martin at 10 a.m., a Double Dan Horsemanship demonstration at 11 a.m., a Remembering Annie Goodwin ceremony at 11:55 a.m., and an Aiken Hounds Parade at 12:05 p.m.

There also will be an Aiken Polo Demonstration later in the day during a cross-country competition break.

The Ride for Charity fundraiser also will be held.

“We hope everybody will come out and enjoy the Grand-Prix Eventing Festival,” Bostwick said. “The weather forecast looks amazing.”

The high temperature is expected to be in the 70s Friday and near 80 degrees Saturday, according to the National Weather Service in Columbia.

The chance of precipitation is low both days.

When the competition began in 2019, it was known as the LiftMaster Grand-Prix Eventing showcase.

Bruce’s Field is at the corner of Audubon Drive and Powderhouse Road.