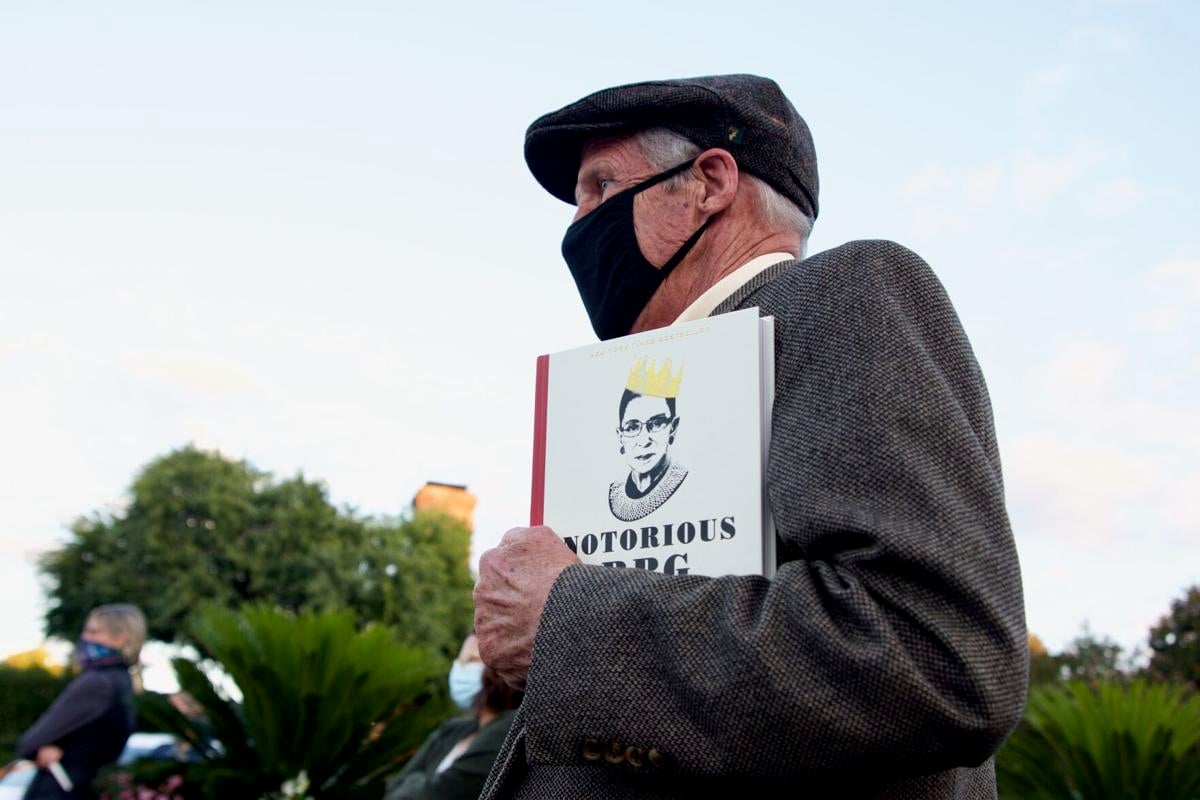 A man at the Newberry Street vigil clutches a "Notorious RBG" book, a reference to the late Ruth Bader Ginsburg, a U.S. Supreme Court justice. 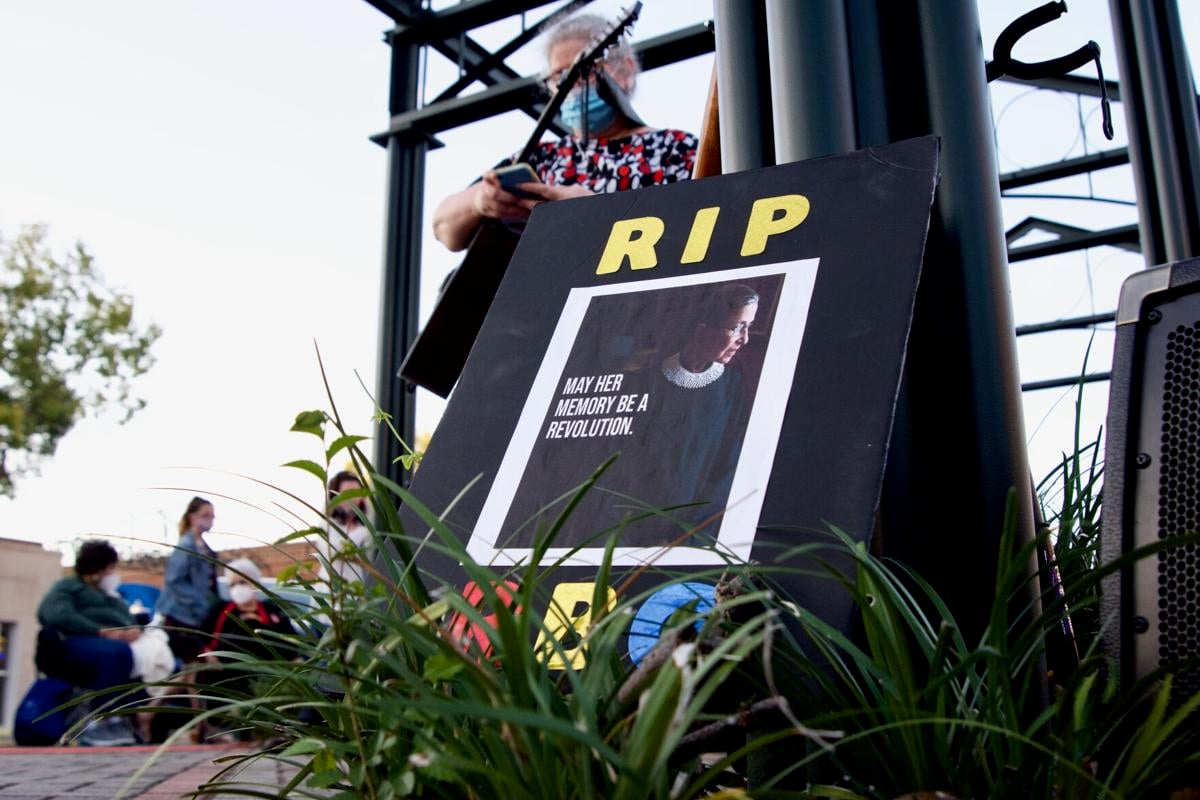 This sign, "RIP RBG," was propped up at the vigil along Newberry Street in Aiken Sunday night. 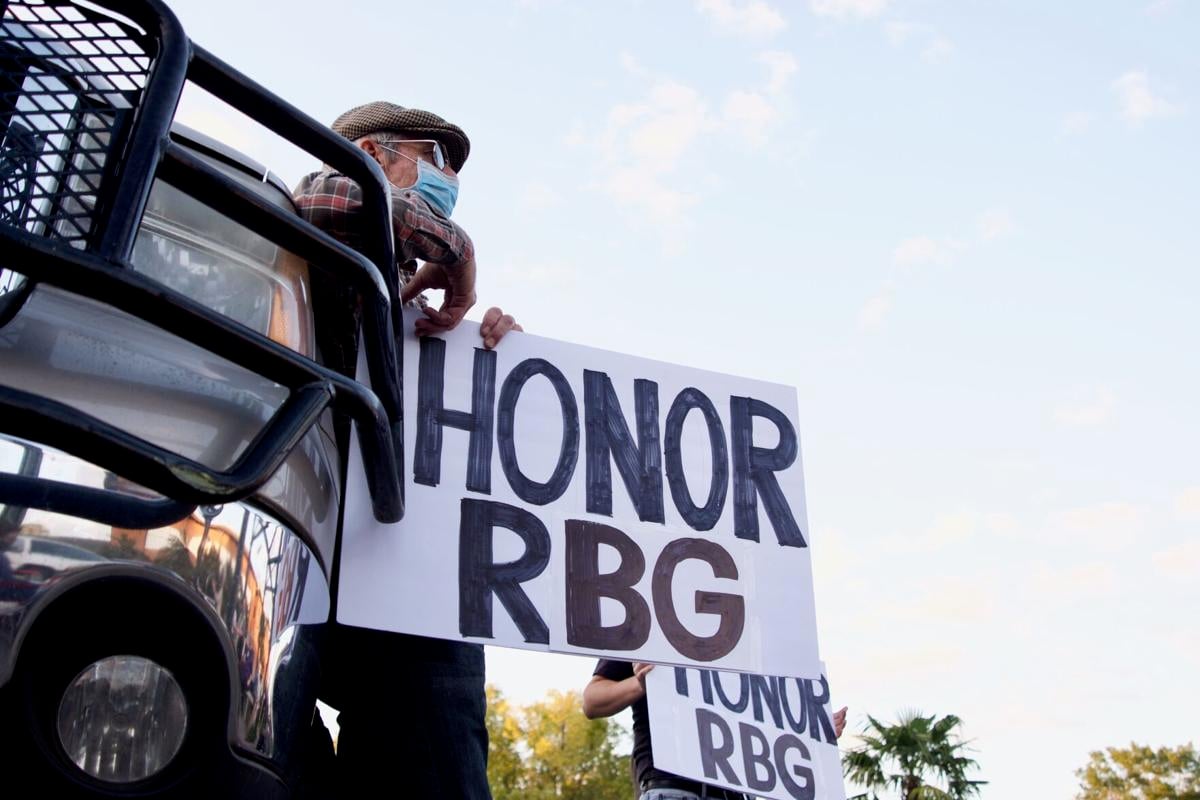 A man at the Newberry Street vigil clutches a "Notorious RBG" book, a reference to the late Ruth Bader Ginsburg, a U.S. Supreme Court justice.

“Devastated” is how Karin Sisk felt when she heard news that Ruth Bader Ginsburg, the second woman to serve on the U.S. Supreme Court, had died.

“She reflected so much of the life I lived,” said Sisk, standing in downtown Aiken at a vigil she organized to remember the legal and cultural icon.

“She was, kind of, my idol,” added Sisk, an active member of the League of Women Voters.

Ginsburg died Friday, the result of complications of metastatic pancreatic cancer, according to a statement from the high court. She was 87.

This weekend, Ginsburg’s seat at the court was draped with black wool crepe, a tradition that dates back to the 1800s.

The Sunday night ceremony at the Newberry Street fountain was attended by approximately 50 people. Many arrived with candles – some fake, some real. The latter struggled in the late-September wind. Others arrived with folding chairs, signs and cameras.

“May her memory be a revolution,” read one placard, which featured a delicately lit portrait of the firebrand justice.

Among the slew of attendees were Aiken City Council members Lessie Price and Gail Diggs. One of the speakers and performers was Elizabeth Georgian.

“It’s hard to say how much she’s meant,” Georgian said of Ginsburg, “both constitutionally and the ways in which she brought women into the Constitution where we weren’t recognized before.”

Ginsburg’s most important recognition on the court, Georgian said, was that gender inequality hurts both men and women – a double-edged sword.

“She was a person who did so much for this country,” Sisk said separately.

Ginsburg was born in Brooklyn, New York, in 1933. In the subsequent decades, she bushwhacked for women’s rights and advocated for equality under the law.

Her death has set in motion a political tug-of-war impossible to ignore; an already-turbulent presidential election has seemingly been reshaped weeks away from Nov. 3.