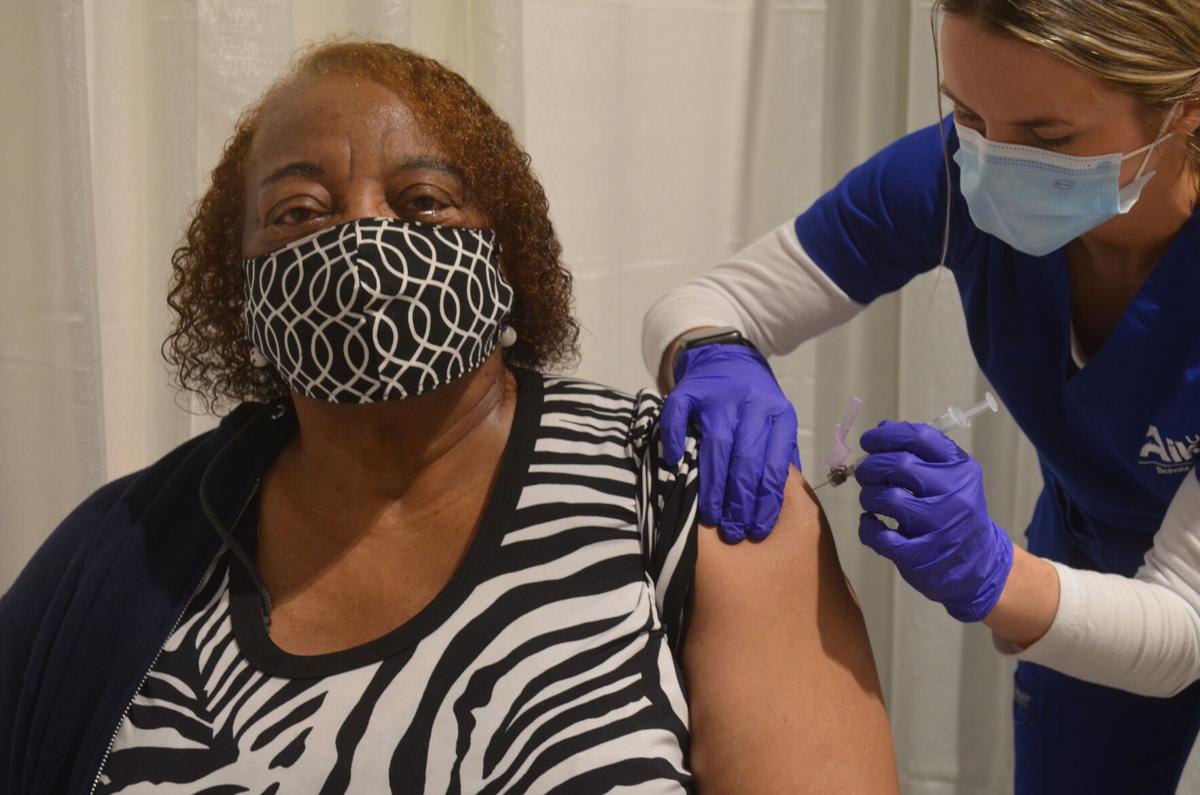 Mary Bean gets her first dose of the COVID-19 vaccine at a Rural Health Services vaccination clinic in Aiken. (Landon Stamper/Staff) 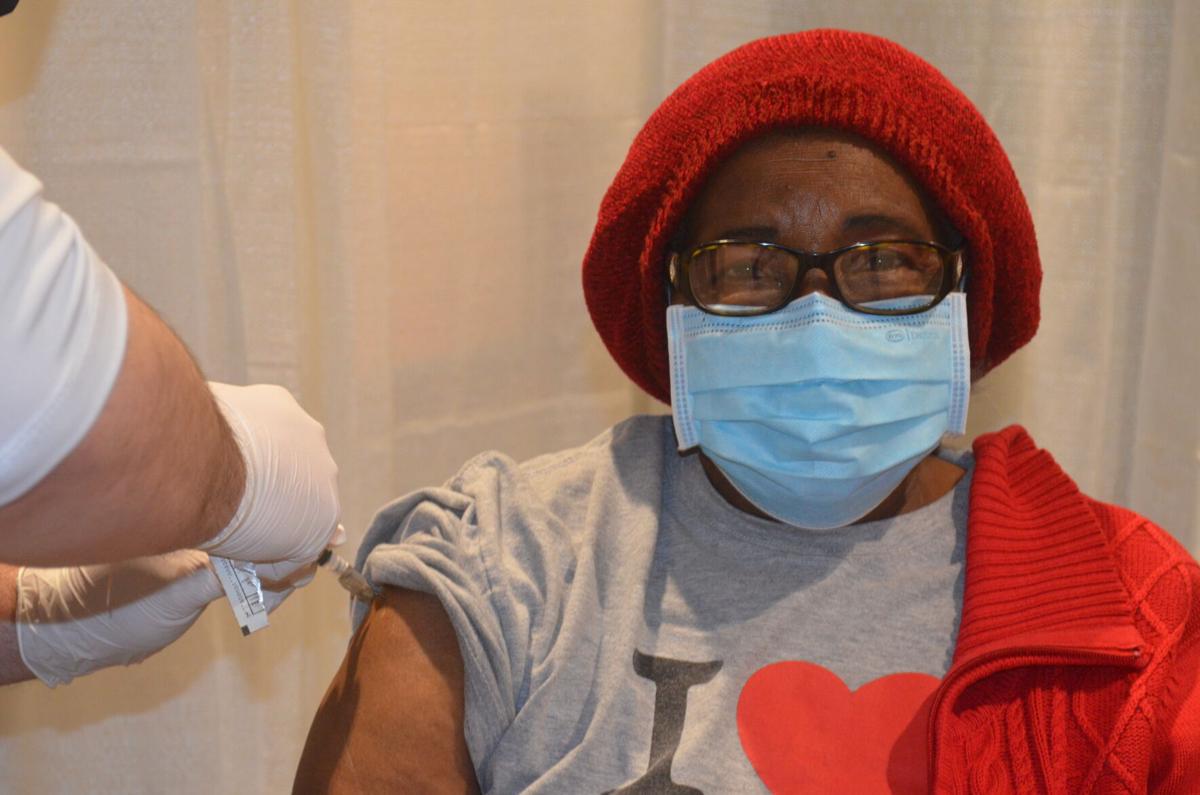 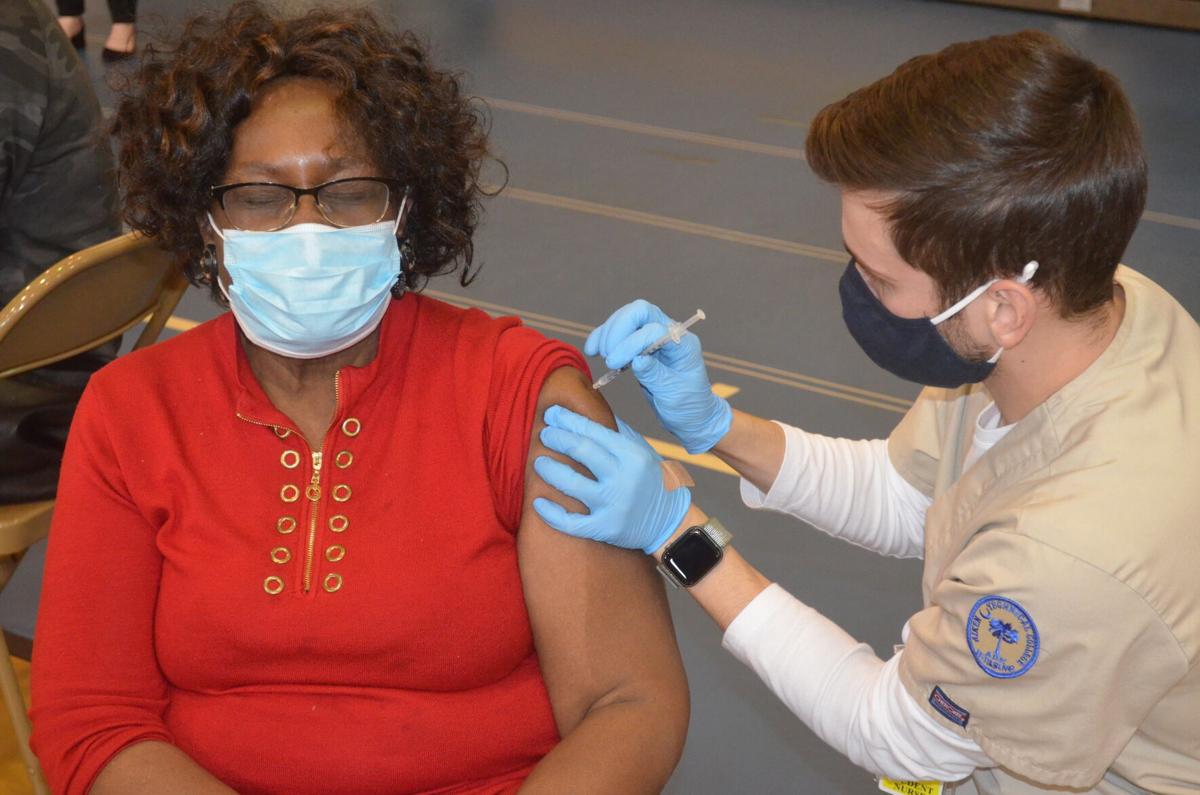 Vivian Clark shuts her eyes as she receives her first dose of the COVID-19 vaccine at Aiken Technical College. (Staff photo by Landon Stamper) 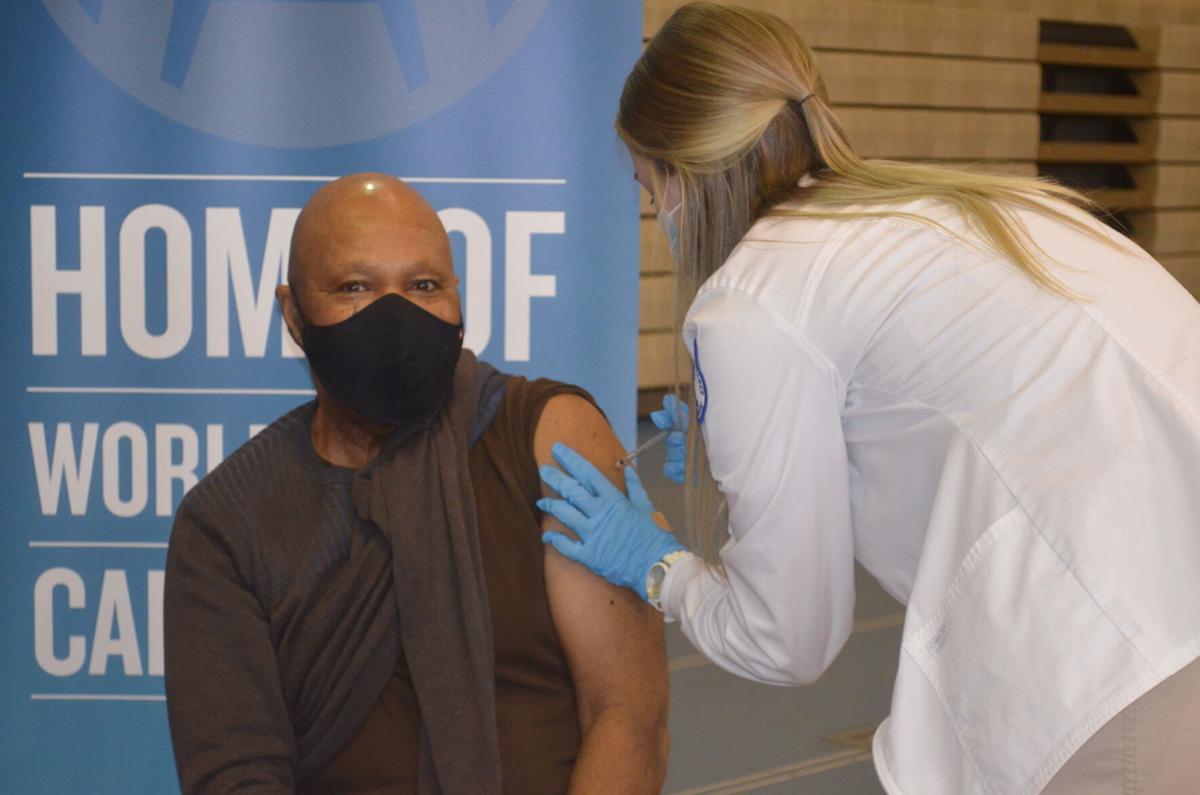 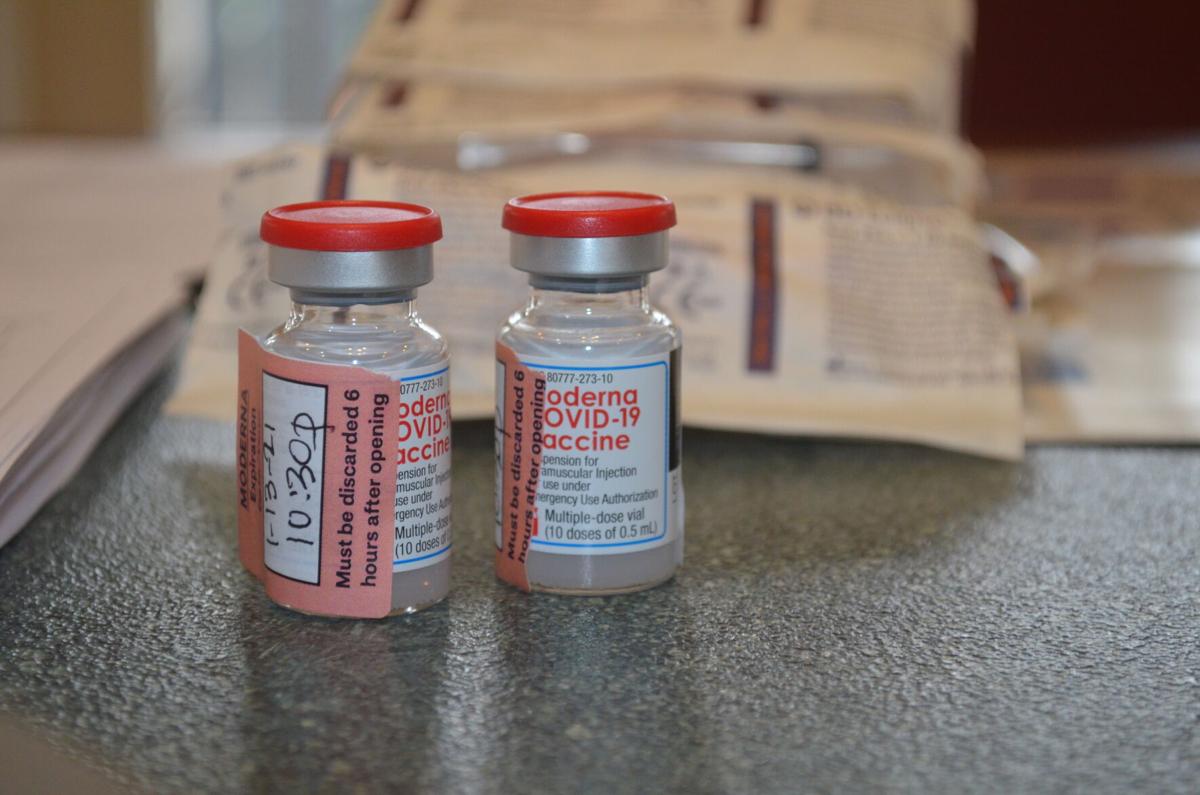 Vials of the Moderna COVID-19 vaccine sit on a table at HarborChase of Aiken.

Mary Bean gets her first dose of the COVID-19 vaccine at a Rural Health Services vaccination clinic in Aiken. (Landon Stamper/Staff)

Vivian Clark shuts her eyes as she receives her first dose of the COVID-19 vaccine at Aiken Technical College. (Staff photo by Landon Stamper)

Vials of the Moderna COVID-19 vaccine sit on a table at HarborChase of Aiken.

The virus was then transmitted to Carolina's husband, and she took care of both her husband and older son at home. Soon after, Carolina, 47, began feeling sick and was eventually admitted to the emergency room, where she tested negative for COVID-19. Despite her test result, she was experiencing basically every symptom associated with the virus.

"I developed a cough, body aches, headaches, sore throat, lost my taste and smell, lightheadedness, dizziness, no appetite, (and a) fever" of 103 degrees, Carolina said.

While Carolina was in the ER, she experienced diarrhea, which led to dehydration and, eventually, kidney failure. She also said she developed pneumonia, as well as diabetes.

In addition to the initial test, she has tested negative for the virus two other times. She did, however, get tested for COVID-19 antibodies at the end of January, and that test came back positive.

Since coming home from the ER, Carolina's hair has also started shedding, which she said happened to her mother as well. Despite all this, Carolina is still a fighter.

"I can't complain," Carolina said. "I thought I was going to go to the other side, but I just prayed about it and did what I needed to do that I know I needed to do to come home."

Along with the death rate being the highest, Black residents also account for the highest rate of COVID-19-related hospitalizations. Of the 103,280 COVID-19 cases in Black S.C. residents, 7,153 of them have been hospitalized, for a 6.9% hospitalization rate.

Comparatively, 10,221 white residents have been hospitalized, for a 4.5% rate.

Gail Diggs, an Aiken City Council member and director of community health and outreach at Rural Health Services, said she sees a few factors behind the Black death rate being the highest.

"We know that (Blacks) have the highest incidence of hypertension, diabetes, a lot of cardiovascular conditions," Diggs said.

She also brought up that due to a lack of affordable health care options, "sometimes African-Americans have been in situations where, and not just African-Americans but a lot of other people, but especially them, where they have to choose between paying for their medicine and paying their rent.

"It’s not something where regular check-ups are happening," Diggs said.

The pandemic has cast a light on weaknesses within society, as a whole, and particularly in Aiken County, said Eugene White, the president of the NAACP's Aiken County Branch.

White said he sees COVID-19 as truly being a triple pandemic in Aiken County.

"First, we had the pandemic that came from COVID, and then we’ve had the pandemic as it relates to economic opportunities and employment, and then, finally, an impact of social justice kind of washing across the county and the nation all kind of at the same time," White said.

Given that all three of these things are interconnected, they can be difficult to unpack individually, White said. However, he sees the foundational piece that connects many of the COVID-19 struggles to be the digital divide that exists in the county, meaning the difference between those with internet access and those without.

During the pandemic, internet access became a crucial piece of many people's lives, perhaps more than ever before. With many jobs going virtual, workers had to have broadband access to be able to work from home. Along with this, workers deemed essential did not have the option to work from home.

Racial divides show up in an examination of this data. A 2017-2018 survey by the U.S. Bureau of Labor Statistics showed that only about 20% of Black workers had the ability to work virtually, compared to about 30% of white workers.

"As a result, (the Black population) had to continue to clock into uncertain situations for wages, simply because their jobs and their services are deemed to be essential," White said.

As the vaccine has been rolled out, it has created a new area of issues that include inequality with the distribution of the vaccines.

Around 8% of the state's vaccines have been given to individuals with an "unknown" race designation, meaning they do not know or did not wish to provide their race or ethnicity.

"I think that there tends to be a distrust that comes from receiving a vaccine based on harms that have been done to the Black community in the past," White said. "Those things will be very difficult to overcome, although agencies are working to overcome those."

Diggs referenced the Tuskegee Syphilis Study as one reason Black residents are leery about the vaccine. This study was conducted between 1932-1972 and its goal was to study how syphilis progressed if it wasn't treated. The study has been widely decried for a lack of ethics, as none of the men involved knew they had syphilis or that a cure was available.

The only people studied were Black sharecroppers, who were promised free healthcare for participation. They never received it.

Diggs said she's worked to tell questioning residents that "there’s been a lot of research, and it’s not just going to be given to African-Americans like the Tuskegee vaccine was. Everybody’s on the same playing field right now with the vaccine. Everybody’s getting the same thing. It’s definitely safe, and we can trust it to help get us through this pandemic."

Carolina said she's been very leery about getting the vaccine, "but at this point, we’ve got to do something to control it."

"My mom was very scared to get (the vaccine), but I told her, ‘You have to at this point because your antibodies are probably gone by now,’" Carolina said. "She’s 65, and she needs to take it. I need her to be here a little bit longer, and I don’t want this to take her to the place it had her before."

Carolina's main fear comes from how quickly the vaccine was developed, much quicker than any other vaccine in history. However, she has decided to get it in the near future.

Emanuel-McClain said she thinks the reason for the Black population having received such a low distribution of the shots across the state is because the clinics aren't offered in communities that are easily accessible to them.

One positive that Emanuel-McClain brought up is that she's seen about a 50/50 split in terms of Black residents versus white residents who have come to the vaccine clinics Rural Health Services has held.

"(Black residents are) just as acceptable of the shot and want the shot as much as anyone else, especially when they have an understanding of what the shot is, what you can expect from it and how you will feel," Emanuel-McClain said.