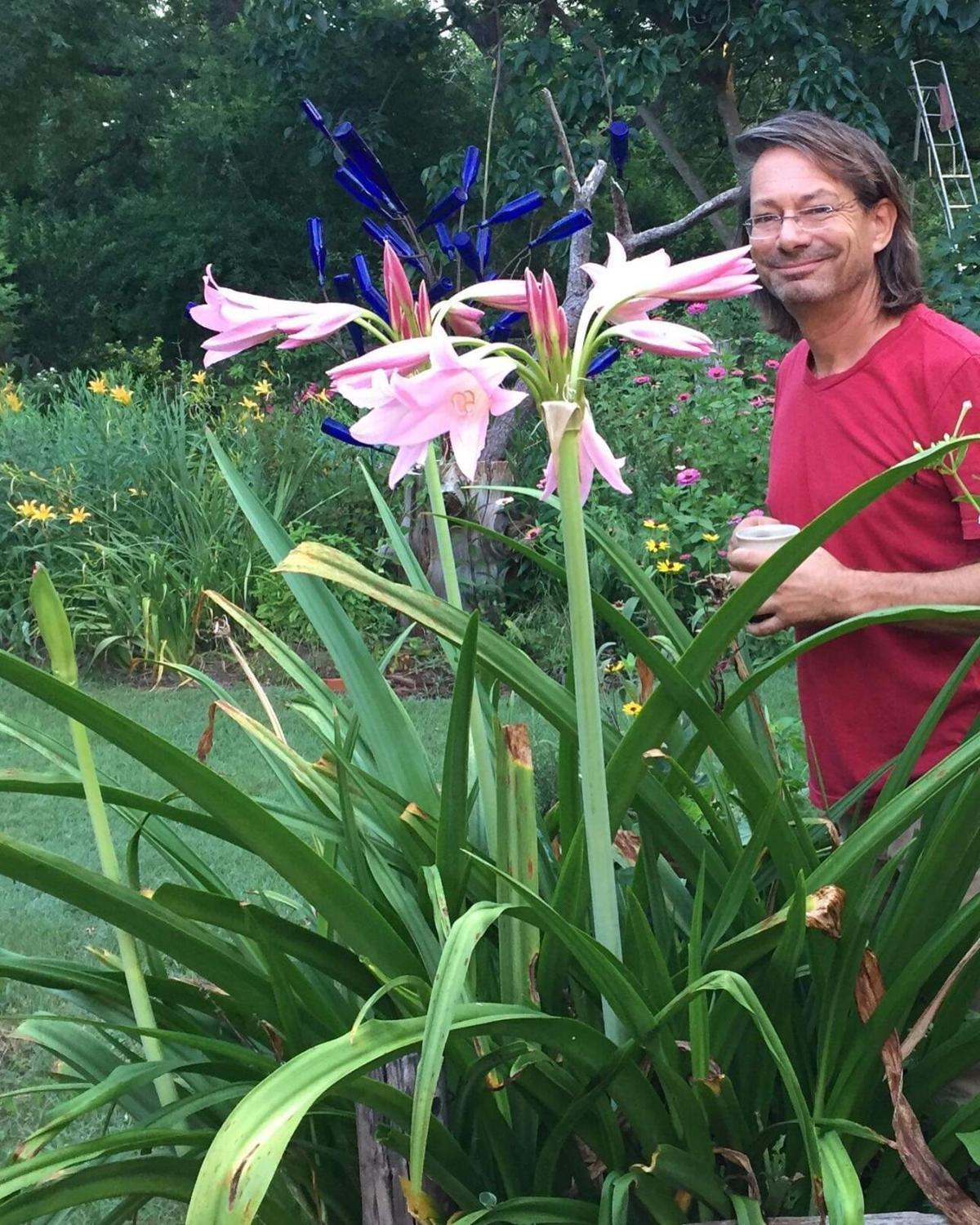 Jenks Farmer next to a big lily plant.

Jenks Farmer next to a big lily plant.

A worthy addition to the reading list that I have been compiling over a dozen columns this past spring and summer is “Funky Little Flower Farm.” Penned by local plantsman and garden curator Augustus Jenkins Farmer, the book is an unusual hybrid: part memoir and part plant guide.

After a life of globetrotting and working on large public garden projects – he curated the Riverbanks Botanical Garden in Columbia and the Moore Farms Botanical Garden near Lake City – Jenks Farmer returned to his family’s 18th-century farmstead in Beech Island in the 1990s to set up a cottage industry involving the cultivation and sale of a classic Southern plant, native to tropical and semitropical climes: the crinum lily. He currently grows about 50 varieties of this hardy plant with its showy blossoms that range in color from white to pink to deep rose to reddish purple.

In defining the literature of this region of the country, scholars have long observed how much storytelling is ingrained in the Southern consciousness. Farmer’s volume is no exception. The basic narrative focuses on life and work on the 5-acre farm from January to December, but each chapter is also peppered with recollections of the author’s youth and lessons learned from those around him, most especially his mother Gloria Farmer and his partner Tom Hall.

From Momma, Jenks learned to regard a life lived close to the soil as an adventure and to appreciate his hands most when they “are coated with red crust.” In the chapter titled “Mother’s Day Field Open,” a reference to one of the dates when the farm in open to regular customers and recipients of his newsletter, Gloria Farmer takes center stage in recounting a girlhood recollection of reaching into a potato clamp, a 3-foot-tall storage mound topped by a cone-shaped tin cap for protection from the rain, and feeling around in the lush earth for a sweet potato or turnip for supper. “It was just magic to push my hands into the dark and feel around.”

From Tom, who manages the shipping of crinum bulbs around the world, Jenks learned the value of skillful packaging. Of both Irish and Japanese lineage, Hall imbibed the merchandising culture of his war-bride mother Satsuko in making each package “feel like a gift.” The care in which Tom assembles his packages makes each customer know that it is “more than a brown box from a warehouse”; indeed, almost each month someone will send him a handwritten letter of appreciation in return.

The ancient Roman poet Horace argued that literature must both entertain and instruct, and this book does both. Readers will enjoy the many anecdotes, such as Jenk’s retelling of how he once built a wooden ramp so that his boyhood buddies could jump their bicycles over the giant, 50-year-old Orange River lily near the house. Readers will also relish the copious information on plants and gardening techniques.

Nearly 90 regional plants are featured in the text – from crinum to Japanese apricot, from mayhaw to reindeer moss. Jenks Farmer offers practical advice about their cultivation and care. For example, he argues against the common wisdom that it is always best to plant perennials in the fall or winter so that their roots have a chance to establish themselves; instead he asserts that plants that come from “places without cold,” like crinums, can be planted all summer long. There is also the issue of mulch selection; “just like some sweater fabrics capture the heat of your body better than others, some types of mulch capture the heat of the earth better than others.”

It is also when Farmer talks about regional flora that he waxes most poetic. In his mind’s eye, February fields of toadflax, wild mustard and sour grass become “embroidered meadows of lavender, burgundy, and gold.” A month later, nature’s color wheel revolves and “curtains of purple wisteria dotted with yellow Carolina jessamine cascade from the trees.”

Life on the farm has led as well to what Jenks Farmer calls “pickup truck philosophizing.” While toiling outside in July on a “three T-shirt day,” he cannot help but muse about how the “water content of cells – ours, crinum, peanuts, and dogs sleeping under the truck – the floating haze of 98% humidity connects us in the same way. It means we’re all one.”

Divided as it is into 12 chapters, this is a book for all seasons, a text that one can dip into as one month turns into another. Farmer himself confesses at one point to “having always used writing to express what is in (his) heart and to present (his) impressionist-like take on the world and gardens.” We should congratulate him for indulging that impulse, which has led to the publication of this thoughtful and diverting volume.

To subscribe to his newsletter and find out more about his store and how to obtain a copy of “Funky Little Flower Farm,” visit jenksfarmer.com.