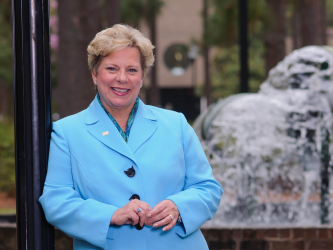 USC Aiken's tuition will not increase this fall.

The University of South Carolina Board of Trustees approved a budget plan Friday that will keep tuition the same at USC's comprehensive four-year institutions, USC Aiken, USC Beaufort and USC Upstate; at two-year institutions, USC Lancaster, USC Sumter, USC Salkehatchie and USC Union; and the Palmetto College, according to a news release from Jeff Stensland in the university's Office of Communications and Public Affairs.

“We are pleased to learn the USC Board of Trustees approved our request for zero tuition increases for the 2019-2020 academic year,” USCA President Dr. Sandra Jordan said Friday. “Thanks to the support of our local delegation, we received an increase in appropriations, which helped make it possible for us to help keep tuition costs affordable.”

Jordan said ensuring all students have access to a quality and affordable education is important.

“USC Aiken is proud to offer a student-centered, excellent education at a phenomenal value,” she said. “Ours is one of the most affordable in the state and is recognized as a standard bearer by 'US News and World Report,' which has repeatedly ranked us No. 1. We are also extremely proud of our 15:1 student-to-faculty ratio.”

Full-time South Carolina undergraduate students at USCA will pay $5,199 per semester for the 2019-20 academic year. Tuition for full-time, non-resident students will be $10,428.

The budget also will reduce administrative costs and prioritize South Carolina residents by holding tuition increases for in-state students on the USC Columbia campus to a historically low 0.6 percent, according to the release. Last year, tuition for in-state students was increased by 2.9 percent, which at the time was the lowest increase in two decades.

Per-semester undergraduate tuition this fall in Columbia will be $6,344 for in-state residents and $16,964 for non-residents, although most residents pay much less as a result of the statewide lottery scholarship program, according to the release. The slight tuition increase in Columbia will be used to cover a portion of rising employee retirement costs.

University leaders credited additional state support for keeping tuition in-check. This year’s budget passed by the General Assembly and signed by the governor included an additional $18.7 million in funding for university system operations as well as $36.8 million in one-time funding for system-wide capital needs.

“We worked closely with lawmakers this year to ensure investment in higher education was a priority, and the additional support we received had a direct impact on our ability to keep our tuition increase as low as possible,” USC President Harris Pastides said. “Specifically, we’d like to thank Hugh Leatherman, Harvey Peeler and Vincent Sheheen in the Senate; Jay Lucas, Murrell Smith and Gary Simrill in the House; and Gov. McMaster for their efforts to make the dream of earning a college degree more attainable for South Carolina students.”

The university system now confers more than 40 percent of all the state’s bachelor’s degrees and above, according to the release, and this year’s incoming class of freshman and transfer students is expected to include more South Carolinians than ever before.

Other highlights of the budget plan approved by trustees on Friday are as follows:

• Tuition increases at the School of Medicine in Columbia and Greenville will be held to 1.9 percent for residents.

• Resident tuition at the School of Law, the state’s only public law school, actually will be reduced by $5,000 for the fall and spring semesters combined; that reduction will help South Carolina stay competitive with other regional and national law schools.

• Housing and meal plan fees were adjusted slightly, 2.5 percent and 2.9 percent respectively for the Columbia campus; food and housing operations are self-funded and do not receive any state or tuition dollars; prices are adjusted annually to reflect inflation in costs of goods and services.

• An across-the-board reduction in administrative costs at the Columbia campus totaling $10 million was implemented to allow for strategic reinvestment in core academic and research functions; South Carolina already is ranked among the most efficient universities in the nation.

“This is a fiscally responsible budget that protects students and families as well as the taxpayers that support our institution. Importantly, it allows us to continue the tremendous progress we’ve made in providing more students the opportunity to earn a degree, building our research capacity and growing the economic fortunes of the state,” von Lehe said.