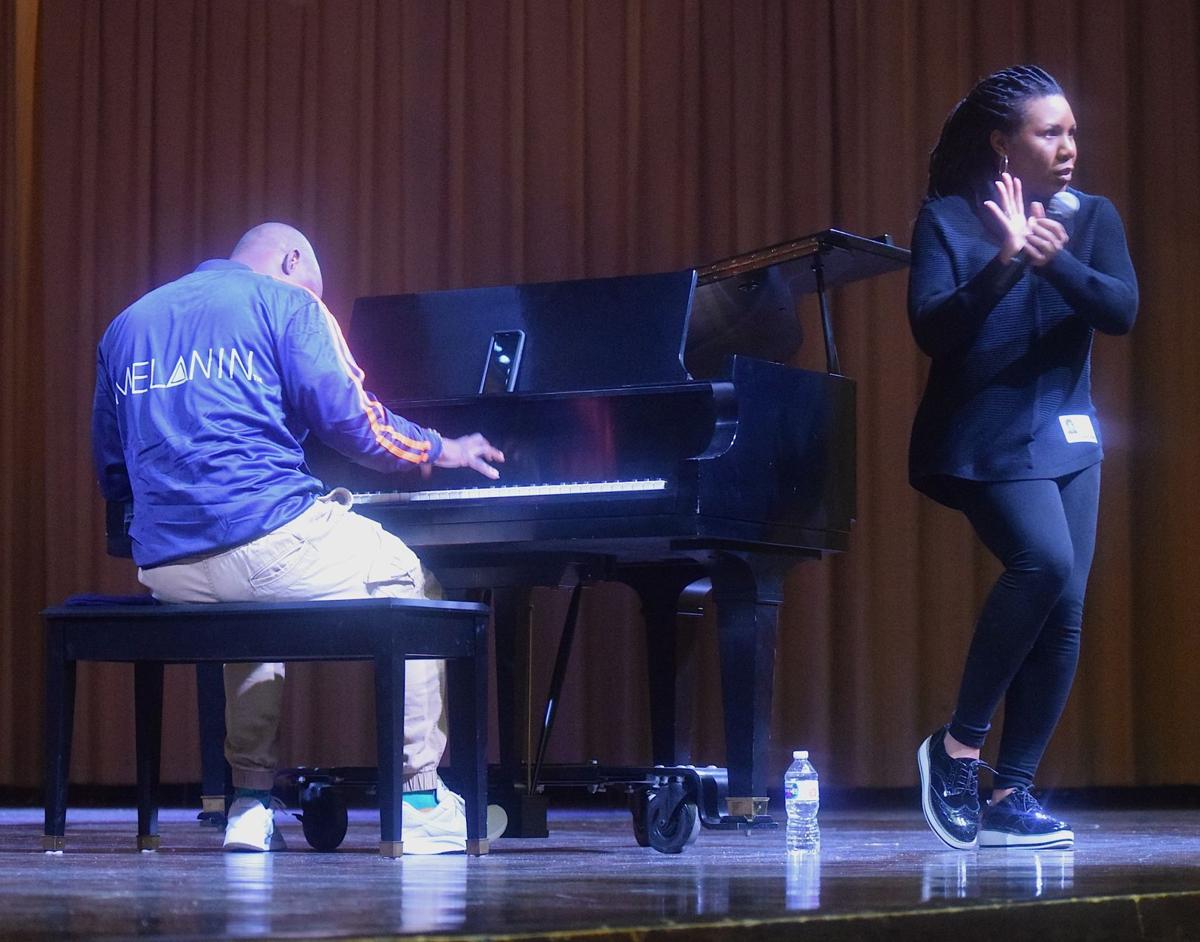 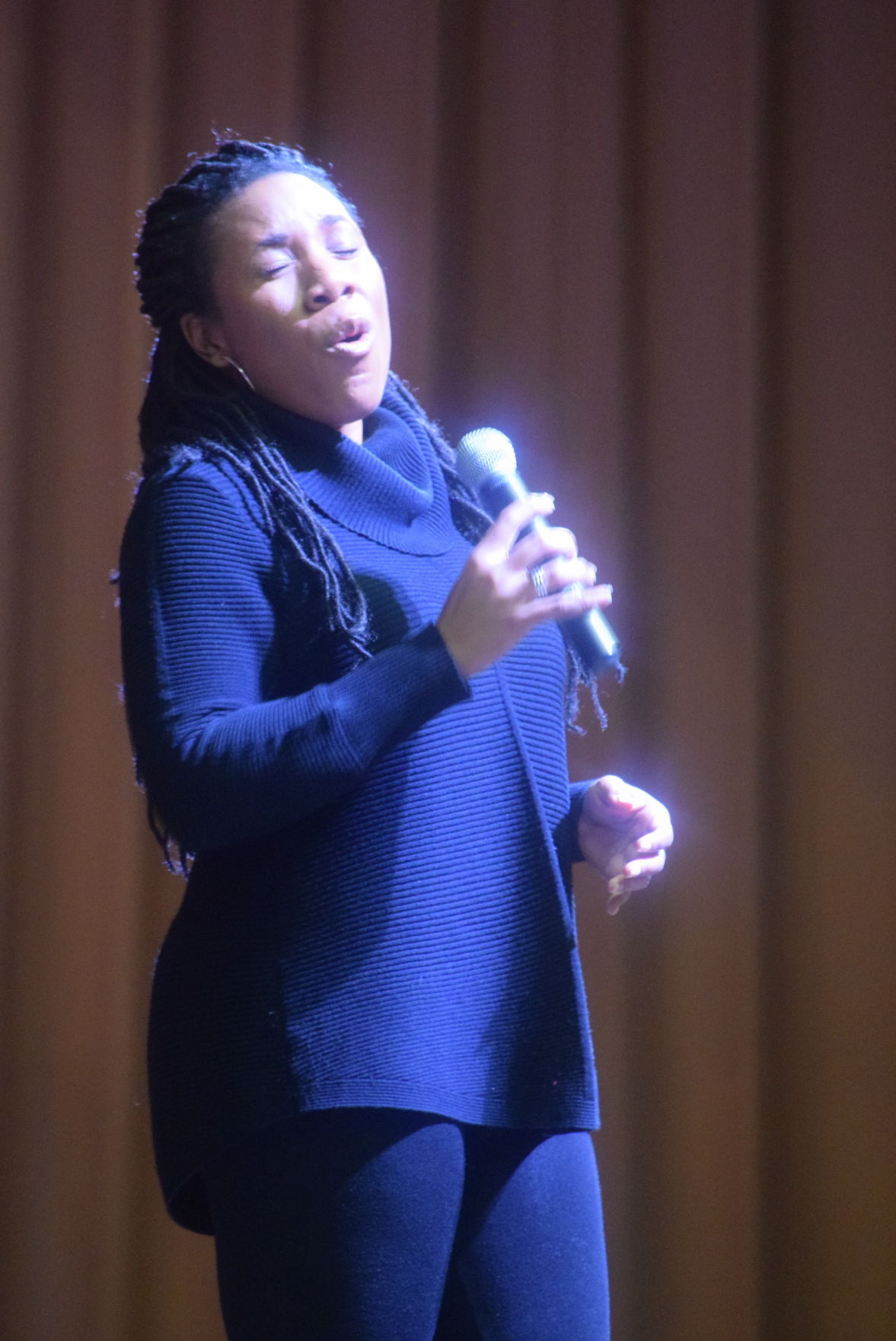 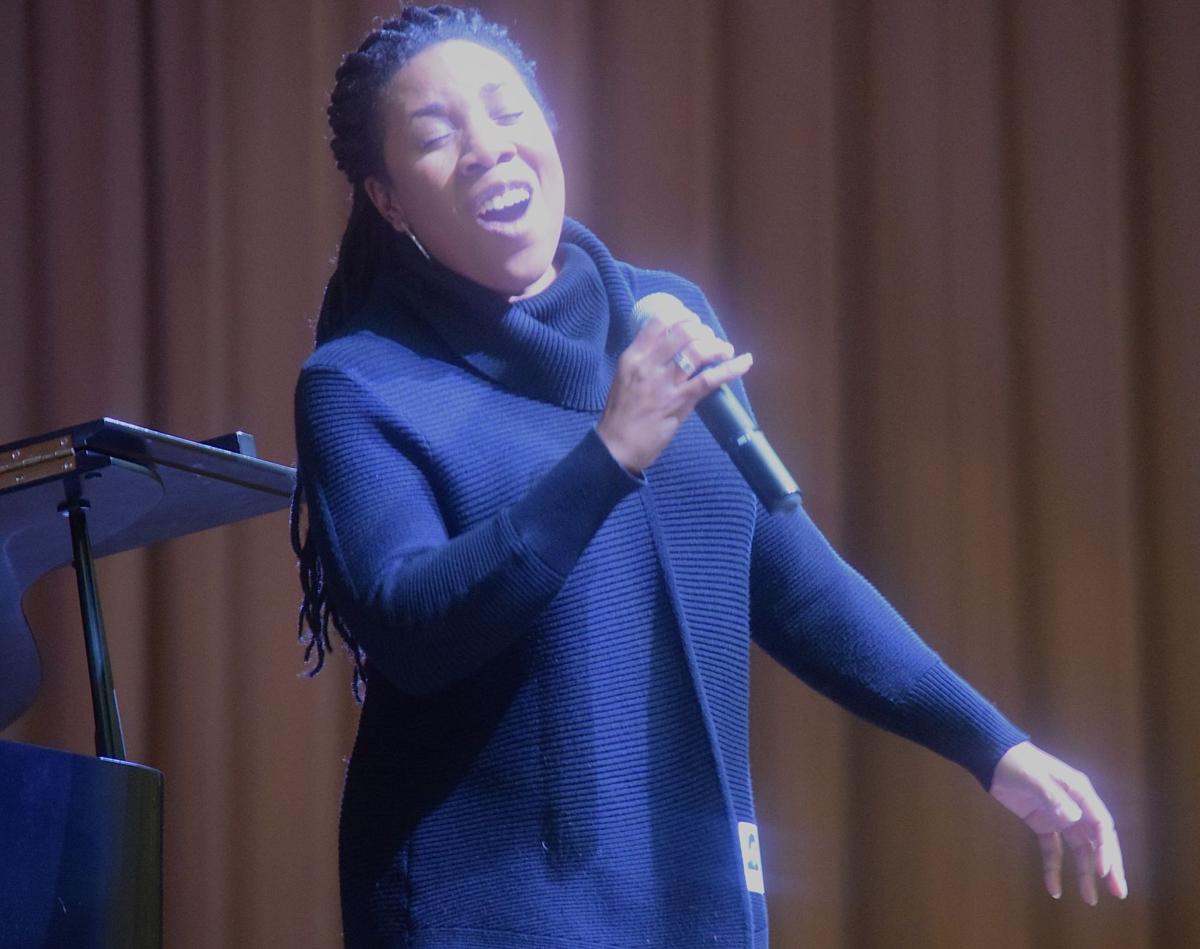 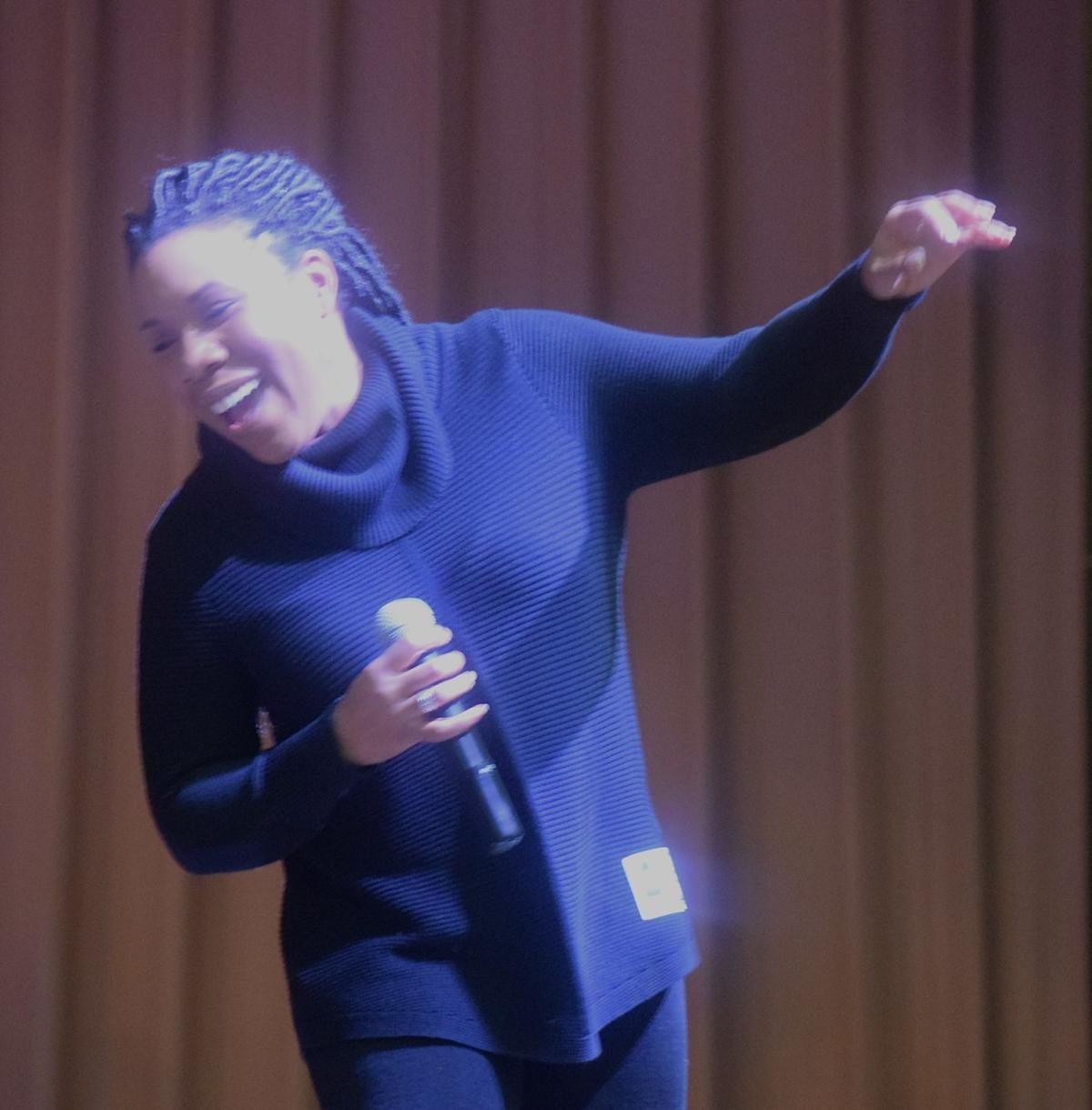 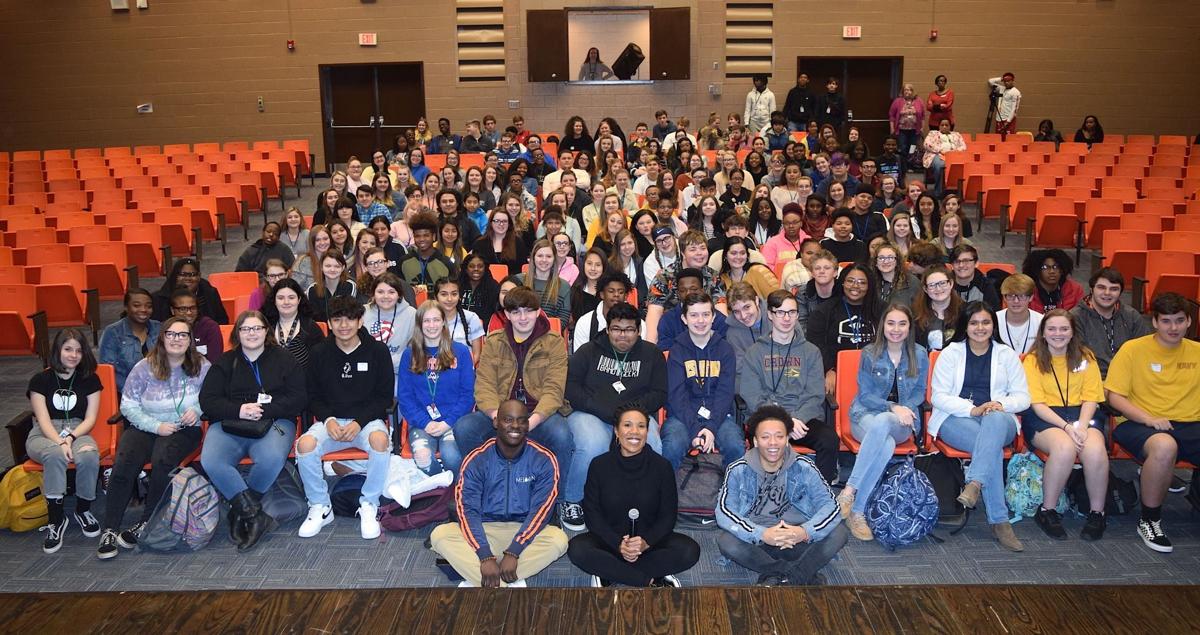 Then they returned the favor.

After a question-and-answer session during which Doolittle revealed CeCe Winans is her favorite artist to work with and former "Idol" judge Simon Cowell really could be scary, a student asked if the students could sing for her.

Doolittle, who had just wowed the students with covers of “Home,” from the Broadway musical “The Wiz,” and a James Bond-themed spin on Britney Spears' pop hit “Toxic,” happily obliged their request.

While Charity Prescott directed, chorus students in harmony sang “Give Us Our Peace.”

“It was a great experience,” Prescott said after the performance. “I enjoyed it.”

Prescott even used some advice Doolittle shared with the students just minutes before.

When Cowell told Doolittle she needed to stop being a background singer, step up front and get some confidence during her first audition with him, Paula Abdul and Randy Jackson, the singer remembered a life lesson her mother had taught her when she was growing up.

“She would say: Do it afraid,” Doolittle said. “Fear can be a really paralyzing thing. It can stop you from going after what is in your heart, going after what you love. As shaky as I was, the fact that I stepped out and did it in the midst of that fear got me to where I am today.”

“We were a little nervous at first, but, as she said, do it afraid,” she said. “It helped.”

Doolittle, who has sung backup for Aretha Franklin and Michael McDonald among others before becoming a solo artist, placed third during the “American Idol” finale in 2007. She and her band performed Thursday and Friday nights as part of Aiken Performing Arts 2019-20 season and at Midland Valley High as part of APA's education outreach program.

Doolittle shared another lesson her mother taught her after she faced criticism online and in the media.

“I'm going to tell you a little lesson that she taught me, and it's going to sound really country; and that's because it is. She said: Chew the hay and spit out the sticks. It's what a horse does,” she said. “When you're getting criticism, be honest with yourself. Is there anything in this that I can take to grow, that I can take and make me better? If there is any truth in it, I can be honest with myself.

“But if there's stuff that's just meant to hurt you, to tear you down, spit it out. It has changed pretty much everything for me, learning how not to take that criticism personally. Learn how to laugh no matter what they say and not take yourself too seriously.”

No. 12,427, Doolittle was one of 16,000 who auditioned for “American Idol” in Memphis. She sang “For Once In My Life,” by Stevie Wonder, after waiting 12 hours. When the producer asked for more, she sang “My Funny Valentine” and then “Tell Me Something Good,” by Chaka Khan.

“I would like to stand before you and tell you that's the worst song you can audition to ever in the history of time,” Doolittle said. “It has a lot of down time, and I like to be true to the music.”

She was one of 280 who made it to the next round of auditions and one of 80 who auditioned for Simon, Abdul and Jackson before receiving her golden ticket to Hollywood.

Since "Idol," Doolittle said she has “been honored to sing all over the world.” She made he debut at Carnegie Hall in New York and sang at the White House and the Kennedy Center in Washington, D.C. She traveled to Tunisia to perform as an ambassador of the United States with her band for three shows.

“Honestly, I've had the most amazing career – better than I ever could have imagined,” Doolittle said.

Doolittle said the connections she makes doing educational programs for high schools or master classes for colleges and universities are her favorite part of her career as a performer.

“I love singing, but this, honestly, is one of the most life-giving parts of what I do,” she said. “Getting kids at the high school age involved and interested in what I'm telling them and being able to give them some things that, hopefully, they can use as they go through that I wish I had known at their age – it's one of my favorite things to do.”

Doolittle said her message to students is: Go after what's in your heart.

“People tell you 'no' all the time, but don't take that as a final answer,” she said. “If it takes a ton of practice, if it takes some prayer behind it, if it takes just doing what everybody else said you couldn't do, that's all right. Prove them wrong. But don't be afraid to have huge-sized dreams.”