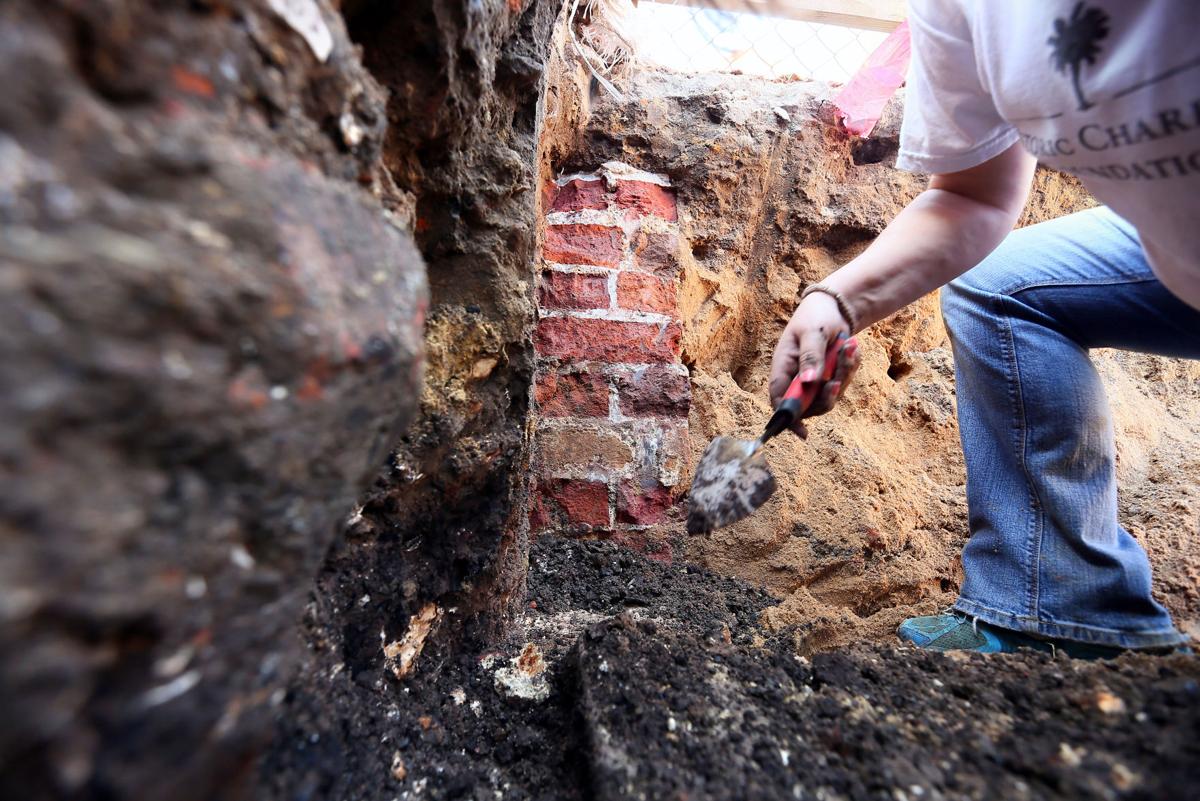 On Friday, Feb. 22, 2019, historians tried to determine the path of an early city wall where these bricks were exposed during the construction of a new hotel at East Bay and Cumberland streets. They are believed to date to that early wall because of the bricks' bright red color and the stark whiteness of the mortar. File/Staff 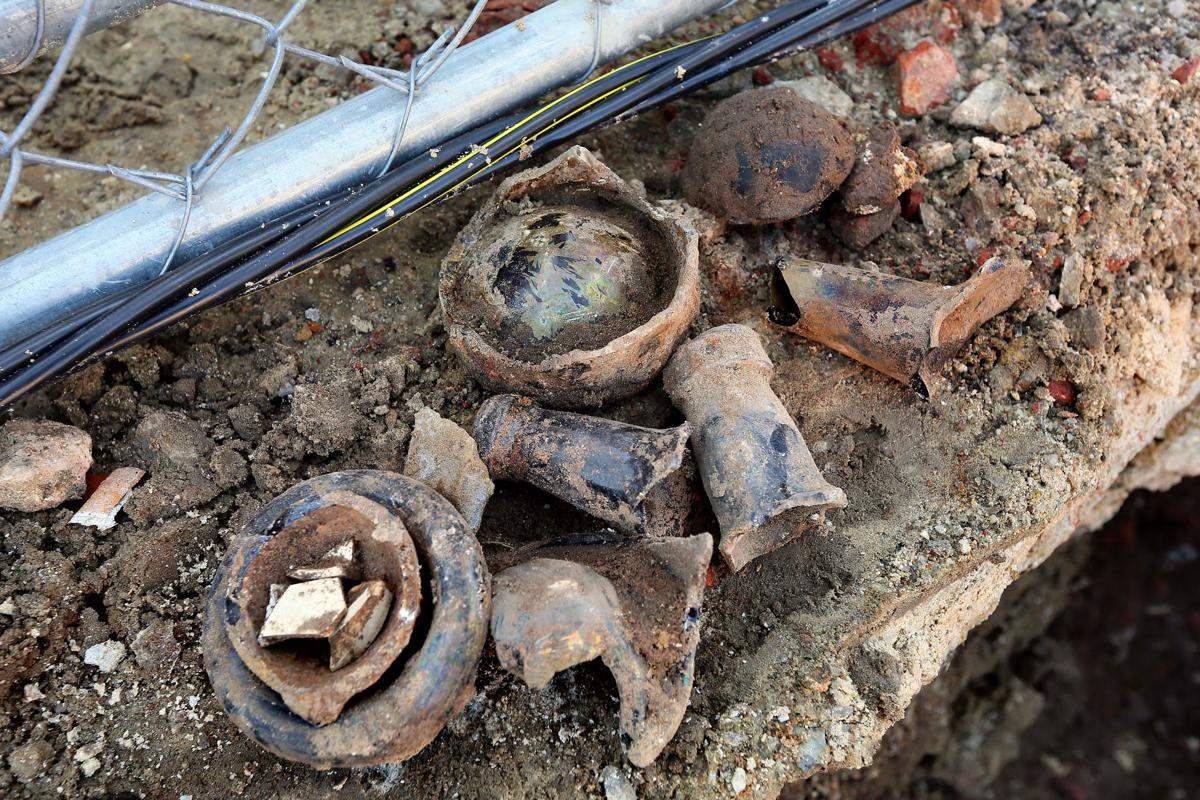 On Friday, Feb. 22, 2019, historians found other artifacts while trying to determine the path of an early city wall, where a portion was exposed during the construction of a new hotel at East Bay and Cumberland. Wade Spees/Staff

On Friday, Feb. 22, 2019, historians tried to determine the path of an early city wall where these bricks were exposed during the construction of a new hotel at East Bay and Cumberland streets. They are believed to date to that early wall because of the bricks' bright red color and the stark whiteness of the mortar. File/Staff

On Friday, Feb. 22, 2019, historians found other artifacts while trying to determine the path of an early city wall, where a portion was exposed during the construction of a new hotel at East Bay and Cumberland. Wade Spees/Staff

Editor's note: This is the seventh installment in a serialized history of Charleston to commemorate its 350th anniversary.

Construction of Charles Town’s first sea wall commenced in early 1704, as part of a massive plan to fortify the entire city.

It was truly a civic process — most able-bodied residents helped. And, if they didn’t, they were threatened with jail.

The colony’s governing Assembly had put Col. William Rhett in charge of the project, and they could hardly have chosen a better person for the job. Rhett led the Provincial militia, which made him eminently qualified to know where to build the city’s complex system of entrenchments, parapets and drawbridges.

Of course, Rhett — who’d arrived in the colony a decade earlier — was also a wealthy rice planter, merchant captain, local conduit for the Lords Proprietors … and a member of the Assembly that put him in charge of the construction.

Still, he was on a deadline, so Rhett pushed the locals. His crew consisted of slaves and other tradesmen — white bricklayers and carpenters among them — who’d been drafted for the construction.

As Walter J. Fraser Jr. recounts in “Charleston! Charleston!” this crew enlarged the Granville Bastion near the peninsula’s southern tip. From there, the 15-foot brick sea wall stretched north between the Cooper River and East Bay Street. Where the Old Exchange Building now stands, Rhett’s crew built a half-moon battery.

By the time they finished, Charles Town was the only truly walled city north of St. Augustine.

It’s a wonder Rhett got so much work from his crew, because in the first decade of the 18th century, Charles Town held a number of distractions.

As the port became a more popular stop for merchant ships, drunken sailors could be found crawling between the city’s numerous taverns and pubs nearly every night. They blended into a lively street scene peopled with huckster salesmen and a fair number of prostitutes — often women who’d come to Carolina as indentured servants and found the world’s oldest profession offered the opportunity to more quickly buy their freedom.

The Assembly was so horrified it established a night watch to keep a lid on rowdy sailors, and debated legislation to outlaw “men co-habitating with woman with whom they are not married” and “against Strumpets.” The resulting law, Fraser notes, was called the “Act Against Bastardy.”

Colony officials impressively had taken time to impose rules on the city’s morality while plotting to brazenly entwine religion and politics.

As Walter Edgar notes in “South Carolina: A History,” the Lords Proprietors originally planned for the Church of England to become the sole state-sponsored organized religion in Carolina. But as the Proprietors invited settlers of other denominations to settle in the colony, they quietly ignored that tenet of the original charter.

But in the early years of the 18th century the “Churchmen” — basically extremist Anglicans — were busy fighting the “Dissenters” of other denominations. Most moderate Anglicans, including officials with St. Philip’s, thought the Churchmen pushed too hard, but the Assembly eventually adopted the Exclusion Act. The law prohibited anyone who wouldn’t swear allegiance to the Church of England from holding elective office.

After much harrumphing and a trip to England by some Dissenters, the Lords Proprietors ordered the Exclusion Act repealed. They’d promised religious freedom and were sticking to it.

Some colonists welcomed the intervention, but others were beginning to feel the Proprietors’ attention was spotty at best. Many believed, for instance, that the Lords hadn’t done enough to help shore up the city’s defenses. That opinion would persist — and be tested — for more than a decade.

In August 1706, while Charles Town residents were waylaid by an outbreak of yellow fever, Spanish and French ships and troops appeared off Sullivan’s Island and sent word that the governor had an hour to surrender the town.

When Gov. Nathaniel Johnson refused, Spanish troops landed on the peninsula’s neck north of the city. The militia repelled the horde, and took dozens of prisoners, while Col. Rhett ran the French fleet out of the harbor … with the help of a particularly nasty tropical storm.

The city’s new defenses held, but soon would be tested again.

With its wealth, rice and abundance of watering holes, it appeared Charles Town was becoming quite the popular place — despite its new, uninviting brick sea wall.