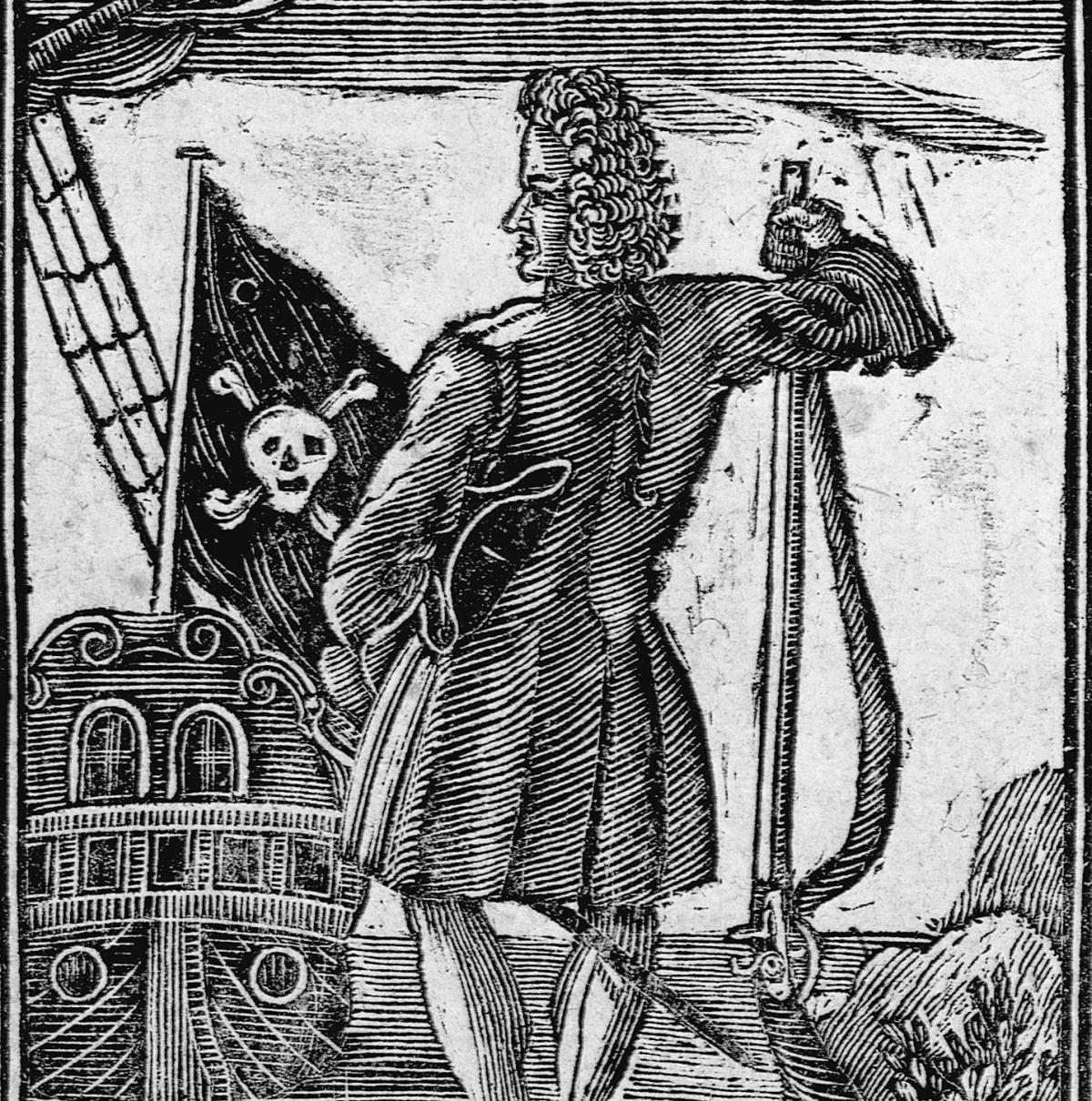 (Circa 1725) Major Stede Bonnet, a Carolina coast pirate who died on the gallows shortly after his capture in 1718. 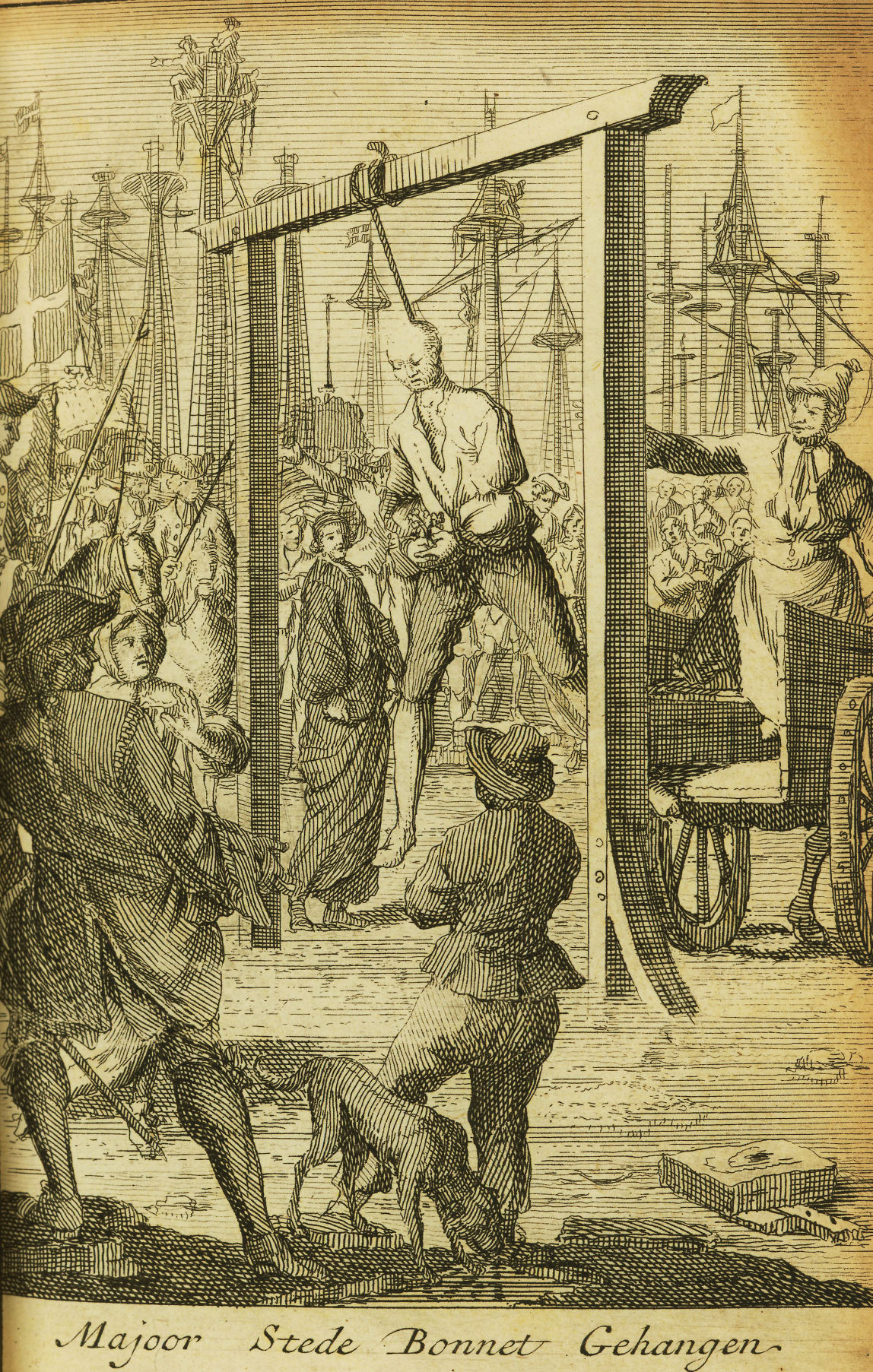 This year marks the 300-year anniversary of Stede Bonnet's hanging. An unlikely pirate, he grew up in Barbados, where he inherited a plantation. After Blackbeard's blockade, fed up Charlestonians captured and hung nearly 50 pirates, including Bonnet. He was hung Dec. 10, 1718. This engraving is in the Dutch version of "A General History of the Pyrates." Library of Congress/Provided

(Circa 1725) Major Stede Bonnet, a Carolina coast pirate who died on the gallows shortly after his capture in 1718.

This year marks the 300-year anniversary of Stede Bonnet's hanging. An unlikely pirate, he grew up in Barbados, where he inherited a plantation. After Blackbeard's blockade, fed up Charlestonians captured and hung nearly 50 pirates, including Bonnet. He was hung Dec. 10, 1718. This engraving is in the Dutch version of "A General History of the Pyrates." Library of Congress/Provided

Editor's note: This is the ninth installment in a serialized history of Charleston to commemorate its 350th anniversary.

Charles Town had soured on pirates long before Blackbeard blockaded the city for ransom in June 1718.

In years past, these colorful criminals had the run of the city and its taverns. Even after British officials ordered the colony to ban pirates, they were welcomed into port. Charles Town merchants had decided these cutthroats were also cut-rate traders, and London wasn’t sending them any cheaper supplies.

According to one account from Frank Stockton’s “Buccaneers and Pirates of Our Coast,” some pirates marooned off the Carolina coast had wandered into town one day — and Johnson had them hanged within sight of the harbor entrance. The display was meant as a warning: Pirates were no longer welcome in Charles Town.

Edward Teach had heard that story, but the man better known as Blackbeard didn’t care. With a fleet under his command, he anchored offshore that June and started picking off ships departing the colony. After a few days, he got lucky.

The pirates intercepted a ship headed for London, its hold full of money and cargo. Among the passengers was local merchant and colony official Samuel Wragg. Blackbeard dispatched some men into port with a message: Blackbeard would hang Wragg from one of his ship’s yardarms unless the city paid his price … which was at least 300 pounds of medicine.

At the time, it was the only thing Blackbeard could think of that he needed.

The city collected 400 pounds of medicine to pay Blackbeard’s price and eventually got Wragg back. The colonists, particularly the governor, were still fuming about it when another band of pirates raided a couple of ships just outside the harbor two months later.

William Rhett quickly provisioned two ships in the harbor, recruited a crew and set off in pursuit. They couldn’t catch the raiders, but when they reached the Cape Fear River — near the site of the original, abandoned Carolina colony — they learned that Stede Bonnet was repairing his ship upriver.

Bonnet had been aboard Blackbeard’s flagship during the blockade, and Rhett saw a chance for revenge.

Trouble was, Rhett’s crew didn’t know the river and both his ships soon ran aground. While they were stuck, Bonnet learned of the pending attack and decided to slip past the ships and escape at sea. But he didn’t move quickly enough. The tide came in and Rhett’s ships were freed.

The battle ultimately lasted five hours, and for most of that time all three ships were immobile. Rhett blocked Bonnet’s ship from escaping into the ocean but, in the process, all three boats became stranded on sandbars. They fired at each other for hours, and it soon became clear the pirates were outnumbered and outgunned.

Rhett’s men took the pirates prisoner, and even commandeered Bonnet’s ship. Shortly after they reached Charles Town, however, Bonnet escaped into the wilds of Sullivan’s Island. Rhett went after him.

Meanwhile, Gov. Johnson fretted the city would be attacked in revenge for Bonnet’s arrest. He sent word to the Lords Proprietors that he needed warships, but before he got a reply, two pirate ships showed up on the horizon.

Johnson gathered some men onto the ships Rhett had used on his expedition, and the governor took Bonnet’s own boat. As they approached the pirates, Johnson flew Bonnet’s flag from the mast as if they were just brother buccaneers.

When Johnson pulled up alongside one of the pirate ships, his crew hoisted a British flag and uncovered the cannons. They quickly overwhelmed the pirates, who obviously weren’t expecting a fight.

Much later, Johnson realized he had managed to capture the notorious Richard Worley. By then, Rhett had returned with Bonnet and Johnson ordered him executed, just as he had for Worley and his crew.

But Rhett had softened on the Gentleman Pirate by then and offered to take Bonnet to England and plead for leniency. Johnson denied the request.

So, on December 10, 1718, Bonnet was hanged on public land that would one day become White Point Garden. His death marked the end of a busy few weeks for Johnson. In little over a month, he had executed nearly 50 pirates.

From then on, most pirates gave Charles Town a wide berth.