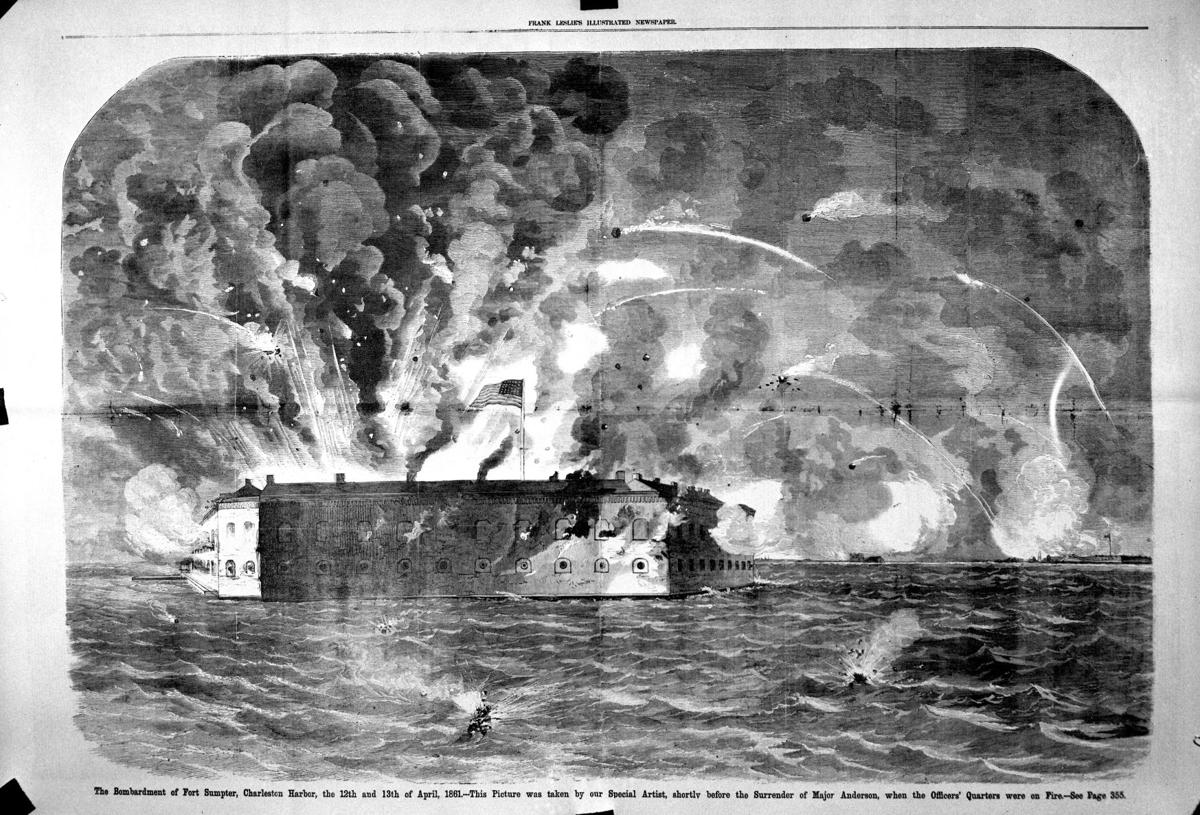 Civil War Metro -- Confederate forces bombard Fort Sumter in the early morning hours of April 12, 1861. The Charleston Mercury would call it a "splendid pyrotechnic exhibition." This depiction of the battle ran in Leslie's on April 27, 1861. Fort Sumter would not return fire until after dawn... 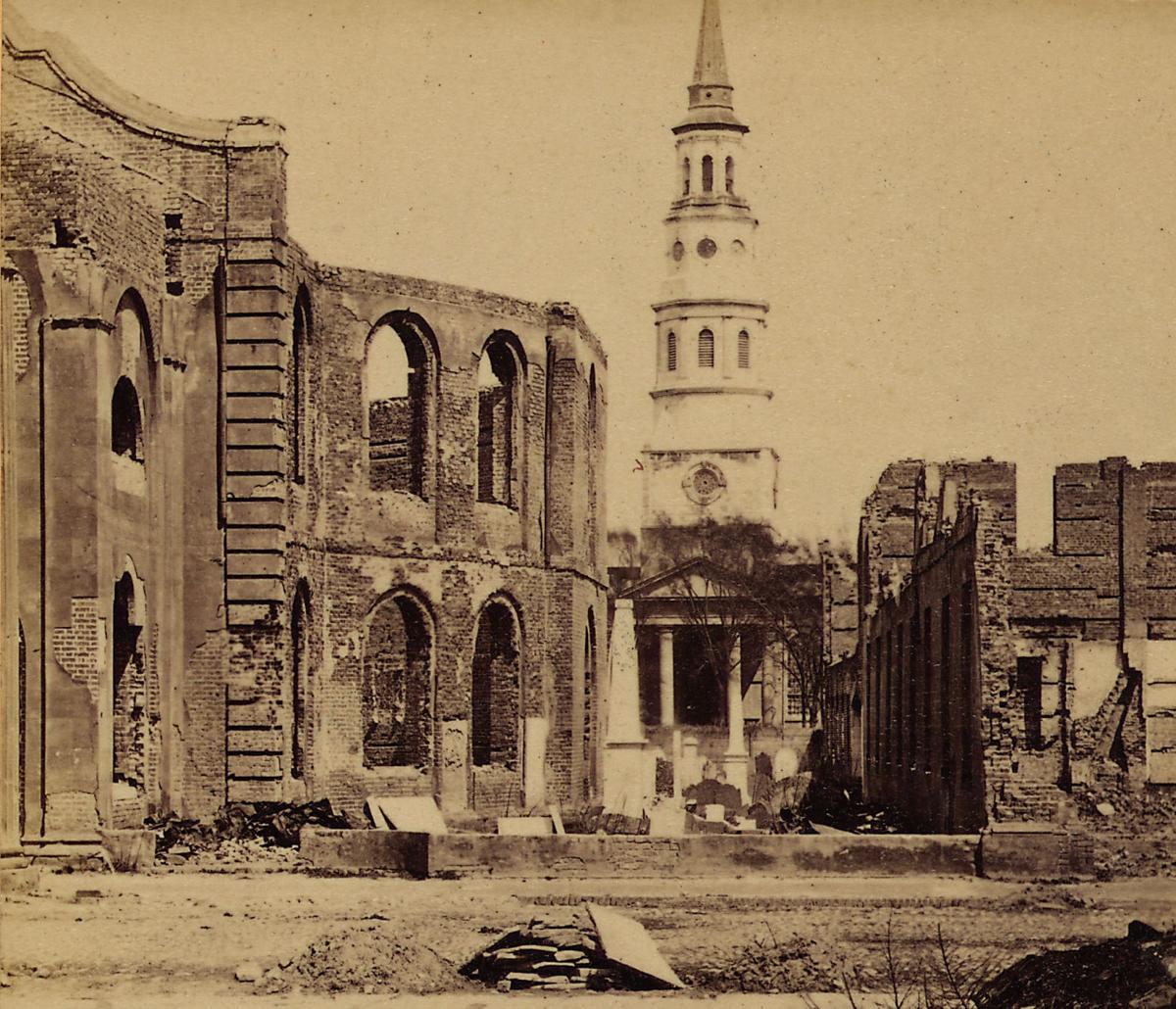 Civil War Metro -- Confederate forces bombard Fort Sumter in the early morning hours of April 12, 1861. The Charleston Mercury would call it a "splendid pyrotechnic exhibition." This depiction of the battle ran in Leslie's on April 27, 1861. Fort Sumter would not return fire until after dawn...

Editor’s note: This is the 27th installment in a serialized history of Charleston to commemorate the city’s 350th anniversary.

The first shot arced gracefully over the harbor — exploding above Fort Sumter in a “splendid pyrotechnic exhibition,” as the Mercury newspaper later reported.

The commencement of hostilities had followed a night of fruitless negotiation. For days, the Confederates had tried to persuade Maj. Robert Anderson to take his troops and evacuate the fort, which they considered Southern property.

Anderson felt duty-bound to stay, at least until he received instructions from Washington, and the Southerners understood … to a point. The famous diarist Mary Chesnut wrote that her husband, Col. James Chesnut, who was involved in the negotiations, “felt for Anderson.”

But the talks ended at 1:30 a.m. with a warning that firing would begin shortly. Three hours later, the first shot came from James Island, followed by a bombardment from batteries around the harbor.

Anderson didn’t return fire until the sun rose. He didn’t want to waste any shells until his men could see what they were shooting at.

“Hour after hour has the fire on both sides kept up,” the Mercury reported. Fort Sumter was doing little damage to the batteries and, from Charleston, no one could tell how Anderson’s men were holding up.

The bombardment ceased at nightfall but resumed Saturday morning. Eventually, someone spotted smoke billowing from inside the fort. Early that afternoon, one shot hit its mark and the U.S. flag flying over Sumter fell, giving Confederates the excuse they wanted.

Members of the Palmetto Guard rowed out to the fort under a truce banner and asked Anderson to surrender. After a day and a half of bombardment, he was in little position to turn down the offer.

Anderson turned the fort over to the Confederates on Sunday and, on Monday, the Mercury reported “Lincoln declares war” — even though Charleston had fired first.

The city initially enjoyed its status as the first defender of the South. The story spread across the country and, for weeks, the Confederate troops — particularly the Palmetto Guard — were feted at parties and ceremonies around town. It was all great fun until May, when the Guard boarded a train bound for the new front line in Virginia.

After that, Charleston was eerily quiet, and some locals seemed displeased that all the excitement had shifted to other arenas. The reality of war only began to sink in when the bodies of some of the Palmetto Guard troops were shipped home later that summer.

On the morning of Nov. 7, 1861, Charleston awoke to the sounds of a distant rumbling. Residents ran to The Battery, looking for the Union ships they had long feared would invade the harbor. They did not learn until the next day that they’d heard the sound of the Union taking Port Royal.

Suddenly, the enemy was in their back yard … and in significant numbers.

“The Yankee marauders,” the Mercury reported, were moving north. On Dec. 9, the newspaper predicted the enemy was coming to burn the city. Not even the presence of the famous Gen. Robert E. Lee, who'd stopped in for an inspection, made anyone feel any better.

Two nights later, someone spotted a fire burning inside Russell and Co.’s Sash and Blind factory on Hasell Street. At the same time, another blaze was detected nearby at Cameron & Co.’s Immense Machine Shops.

As the Palmetto Fire Engine Company arrived on the scene, the wind kicked up and continued throughout the night. The gale fanned the flames, and by the next morning fire had scorched a path across the peninsula, claiming 1,300 houses and buildings. “Secession Hall” was among the casualties of what the city eventually dubbed the Great Fire of 1861. If anyone had stopped to think about it, the loss of the hall where secession was finalized was an ominous sign.

No one ever discovered the true cause of the fire. Some blamed Union sympathizers or even local slaves (a traditional scapegoat), but officials said careless workers at the Sash and Blind factory started it.

The end result was the same: Beautiful Charleston suddenly looked like a war zone, only missing the war. But that would not last. In January 1862, following a melancholy Christmas, the Union Navy appeared off the coast.

The blockade of Charleston was about to begin.